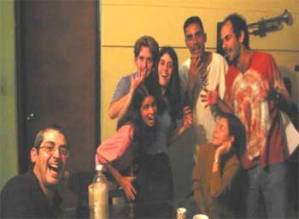 HAVANA TIMES, April 6 — About ten years ago, a group of my friends lived in a house in the Nuevo Vedado neighborhood of the capital. Almost all of them had other places to live; they just preferred being together.

It wasn’t the bubonic plague, but another epidemic — a social and political one — that forced these guys and gals to lock arms in this fraternity in which they felt so warm.

They loved joking around, cooking and eating as a group. Then too, they had their frequent intellectual and political discussions, but above all they liked each other – without fetishizing their mutual affection. Still, what reigned in the environmental was thinking, the questioning of everything and wanting to be free – which wasn’t and isn’t something confined to nut cases.

In the hay day of this little commune arrived Sachico, a young Japanese anthropologist who traveled to Cuba to complete her doctorate.

She lived there with those “savages,” and with her techniques convinced them that she was one of them (or did she really enter into the group?). The truth is that her sushi dishes become regular meals on their communal table.

A few years later this circle of friends achieved their desired dreams of leaving for anywhere and staying in the most distant and disparate places. The idea was to reunite as soon as the opportunity presented itself, but instead, each one began sinking roots and having children in their respective new “homelands.” Even their accents started to change.

Sachi came up with the idea of visiting them and filming each with her little camera to learn and document what had happened in their lives, to see how their ideas and ideals had changed and to find out what happened to the group.

When some of the group came to visit in Cuba, there was Sachi with her intrusive camera capturing the emotional moments, not to mention the conflicts, disappointments and misunderstandings that inevitably gave way.

This documentary, Cuba Sentimental (the title is what I like least about it) will be shown on Saturday at 10:00 a.m. on the second floor of the Cuban Film Institute (ICAIC) building. It’s not in the Youth Film Festival competition underway and it’s only for people who are registered with the festival.

It has already been presented at prestigious festivals and has won a number of awards, though I don’t want to go into those details since Sachi will have more time to talk about those in an interview that we plan to do.

I just want to say (because for her it’s very important) that it was the renowned director Fernando Perez who suggested entering it in the festival here after taking a glance at it in a festival in the Orient.

Oh, by the way, I was one of the housemates. And I should warn you, my diction is terrible!