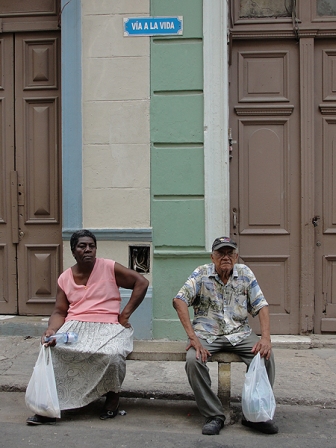 Right now everybody’s happy at home because my father, Calzadilla, has just gotten a new job.  Now he’s not moaning and groaning all the time —at least not in front of us— when things don’t turn out like he wants, which is almost always.

The old guy figured out that all the pesos he was getting paid for retirement didn’t mean a whole lot given the prices of things.  He also didn’t like the life of being retired – being a burden on the family or being looked to as free to run everybody else’s errands; so he started pounding the pavement and, with a tremendous stroke of luck, was able to find work.

It wasn’t easy for him.  Finding a job these days usually means taking whatever they give you.  However, since ex-military personnel are supposedly more reliable, they have better chances under this regime (of course, they haven’t blemished their records in conflicts with the bureaucracy or have to go above the law to resolve their day-to-day problems).

In addition, these retired vets have now formed a kind of a “good ol’ boys club” with members holding onto strategic positions in order to scratch each other’s back.

Therefore, thanks to one of his pals he was able to get a minor position in a bank, but he doesn’t still know if at his age he can acquire the necessary manual skills to accomplish the tasks that are demanded there.

He says the factory-like content of his new job reminds him of “that movie with Charlie Chaplin” (referring to Modern Times), but he’s unable to associate Fordism with Cuban “socialism.”  Whenever there’s a photo of “you know who” hanging on some wall, he always believes that we’re “building socialism.”

Another thing that’s truly terrible for him is coming home on the bus during rush hour, which means more than two hours of fatigue, heat, pushing and shoving, and tremendous anguish between the wait and the ride.

This bitter experience that ordinary Cubans have endured for so many years was something he’d forgotten.  But Calzadilla —who too is a regular guy— is not used to all the rough and tumble on a public bus since previously he was picked up and dropped off by the armed forces in their new, air conditioned Chinese Yutong buses.

Nonetheless, we have to admit that he doesn’t deserve all that.  No senior citizen should have to be subjected to this after having spent their whole life struggling, and then when it comes time to rest they have to continue working until the very last drop of their energy is spent.

But it’s good, in short.  For the moment Calzadilla is happy, so we’re happy for him; though I don’t know how long such happiness will last.