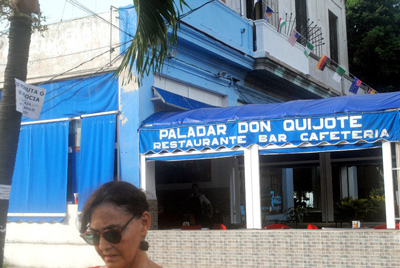 HAVANA TIMES — On Father’s Day – Sunday, June 15 – I decided to pay Cuba’s Cinematheque a visit. I hate Sundays, have many misgivings about the traditional family and its pathetic festivities, try to avoid public transportation on weekends and loathe the scorching sun of our summer afternoons more than a vampire would.

Despite all this, I decided to come out of my comfortable cave, seduced by a documentary they were screening at the Chaplin cinema as part of the Itinerant Caribbean Film Festival. The documentary centered on Jamaican music in the UK.

I arrived at the theater just in time for the screening, bathed in sweat and dying to get into the air-conditioned cinema. I’d been a bit naïve: the AC unit was not working and the theater was a veritable sauna. In the few cinemas still screening films around the city, it is common for the AC to break down during the summer and for them to fix it in winter. Sometimes I think it’s a conspiracy against the “seventh art” designed to favor more profitable establishments.

The heat would not let me concentrate, and the documentary as such wasn’t helping. Lover’s Rock uncritically describes the process by which Caribbean rhythms became decaffeinated upon arriving in Europe. The music industry made a pop phenomenon out of them, transforming them into a product that was as sweet, melodic and sensual as it was bereft of spirit and guts.

I left the cinema-oven before the film was over, all gooey inside and angered at how the people of the Caribbean had sold their identity like cheap merchandise (the result of colonization, no doubt). The sun was still blazing when I came out of the theater and headed down 23 street, towards the bus stop.

The air along this avenue is increasingly unbreathable and I love my lungs too much, so I tend to avoid this, the most well-known and busiest thoroughfare in the nation’s cultural center (to call it that). I walked down the street out of absent-mindedness and, my, how it’s changed!

The State-run cafeterias that offer products in proletarian currency, with their insolent employees and their cheap carbonated or instant drinks, are as depressing as always. Those run by the self-employed, on the other hand, have transformed the look of the avenue: elegant kitsch, delicious and even exotic food, cleanliness and good service. The gentrification of the neighborhood is progressing full-steam and prices are skyrocketing.

It’s spring in Cuba, the fruit season, but, between socialist decadence and the rebirth of capitalism, I couldn’t find a single spot where I could buy a miserable glass of juice at a reasonable price. Luckily, I am still not a father.

One thought on “Walking Between the Past and Future in Havana”