—The Cuban personality assumes some of the most varied and unlikely forms of expression possible. It would be a mistake not to see all of its many manifestations as valid, since from the very beginning the formation of the Cuban nationality has been marked by an eclecticism converging from all parts of the world.

The Malecon in Havana is the ideal scene to demonstrate this. Each time that I approach that seawall I am prepared to encounter any kind of sign from the world of marvels I live in.

The afternoon was very young when I decided to sit down beside the sea. I was early for my appointment with Radio Metropolitana, the station where I was doing my pre-professional practice. There was no better way to pass the time than by taking in the breeze inundated with salt air. 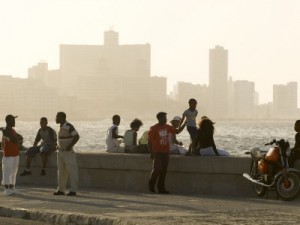 Everything indicated a perfectly normal afternoon, with no incidents worthy of note. This panorama was suddenly interrupted by the prayers of a woman holding a jolongo (pouch with elements related to the African Yoruba religion) tied with knots and swinging it from one side to another.

It wouldn’t have been so strange if the woman had been more discrete in her worship. It could even have been considered unimportant, except that all at once she began to spin around on the wall with the pouch threatening to let go with the first opportunity and land in the calm waters of the Caribbean Sea.

Subsequently, the woman turned her back to the sea, tossed some coins over her left shoulder and continued on her way, seemingly very relaxed.

Other people who were near me and also watched the scene seemed to view it as the most natural thing in the world. Not one of them had the stupefied expression on their face that I did.

But this was nothing compared to what I’ll be describing in my next diary entry.