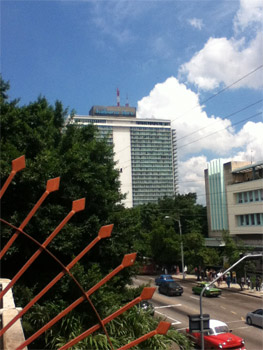 HAVANA TIMES — The following letter is written in response to two letters about leaving Cuba that can be found, respectively, at Rafael andIvan.

In high school I wanted to go to Cuba. This urge probably had something to do with my profoundly inspired, but inexperienced, political ideology. I renewed my aspirations to go to Cuba in University. But this time with more focus. I wanted to be a doctor.

A citizen of the United States, resident of the State of Texas, becoming a doctor in a socialist Caribbean island. Sometimes I wish it would have remained the fiction it sounds to be.

My position in Cuba as a foreign student is neither new nor novel. While consuming Christopher Hitchen’s autobiography Hitch-22 last year (in English of course, I doubt it will be published anytime soon in Cuba) I eagerly skipped through pages of his early life to arrive at the part where he wrote of his summer in Cuba. It was during the 1960’s.

Mr. Hitchens was in Pinar del Rio, picking coffee beans with other internationalists and trying to figure out why the Cubans had taken his passport as soon as he arrived (same reason they took mine I suppose: for our own safety, whatever that means).

Mr. Hitchens proudly wrote of his questioning freedom of expression in a public forum, for which he was spurned by his comrades. He also bragged of passing out literature against the Soviet invasion of Czechoslovakia. I smiled. And then I wondered if he was exaggerating.

But why second guess my literary hero? Because I’m a foreigner living in Cuba, surrounded by foreigners living in Cuba, and I know what it is like to be here. Most of us keep our heads low, voice problems to the point of being incessant amongst one another, and then ingratiate the Cuban system publicly.

What I want both of you, Ivan and Rafael, to realize, is that there is one more option in play in addition to “leaving Cuba” and “staying in Cuba”. That other option is to come to Cuba.

It is what I’ve done, and continue to do. As do the tourists, as do those seeking political refuge, as do students who believe in a system they do not know, or students who are taking advantage of an opportunity to study, local politics be damned. 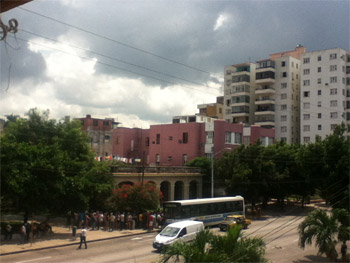 My reasons are numerous and conflicting. Sometimes I feel my mind is only a battlefield where reasons for coming and staying in Cuba tag team the urge to go. No matter which side wins the earth of my mind holds the reasons that died, valiant or cowardly as they might have been. This is how experiences are made. Experiences I want to share with both of you.

I think that the three of us agree that the expectation of mine and Ivan’s generation can be broadly described as expectations of individuals in a globalized world. One does not have to be part of this interconnectedness to know that it exists, and to behold the potential that lies within and throughout.

In what other world could my expectation to become a doctor in Cuba turn into the reality that it currently is?

As you say Rafael, a young Cuban is more likely than his or her non-Cuban peers to be aware and practice the tenets of social justice because the Cuban is a product of a knowledgeable society.

And if we credit the Revolution for producing this social justice within this knowledgeable society, why can we not trust that those ideals cannot hold up to “those Americans”, as you so broadly put it, who will “confuse the people” if freedom of expression and speech are broadened in Cuba?

Rafael, I agree with you fully that the political system in my country is a capitalist endeavor which most voters don’t care about, since only about half of us bother to vote anyway. But to assume that the only choices are between the status quo in Cuba and the status quo in the United States is to be short sighted to the point of being legally blind. 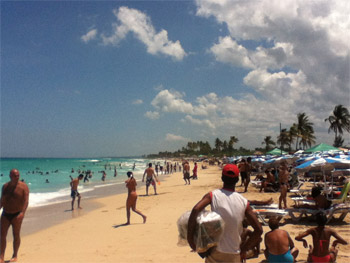 To remain entrenched in either system is to violate the almost biological link between youth and revolution.

If ideas are to do battle, as is so proudly displayed to the point of irony on the back of a 100 CUC banknote, then they must be allowed to clash. Without clash there is not debate.

I did not come to Cuba to change anything here. I came here and remain here to become the best doctor I can be. But I also didn’t come to live my life as a ship passing another in the night. I came to share the indelible curiosity that we humans have of each other, the same curiosity that all good doctors much have every day of their working lives.

There is no good argument why Cubans should not be allowed to do the same, no matter where they want to go in the whole wide world.

Furthermore, I argue that the movement of young Cubans, on their own terms, around the world is the only assurance of preserving the legacy of the Cuban Revolution.

To do anything less than embrace the movement of young people to and from your country, Rafael, is to entrust that legacy to people living here temporarily, such as myself: someone who is ill educated of the tenets of the Revolution, unprepared to defend against ever ready detractors, and at the end of the day entrusted to those authors of liberty from my own country, as flawed as they might be.

Ivan, I agree with you that the decision to remain or leave our prospective countries should never be “judged in moral terms”. However the very fact that you must defend your absence from your country of birth shows that this is not the case.

Perhaps like myself you also have moral self-judgment that wells up from the inside. 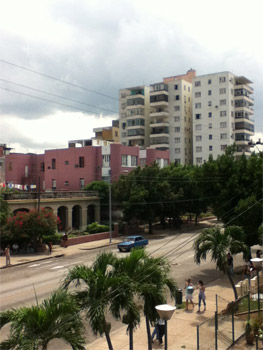 The other day I was leaving the school to go to Havana. This requires a decision. Do I take the bus or a maquina (collective taxi).

Unlike working class Cubans my decision has nothing to do with finances. I can easily pay either, and I almost always opt for the maquina, a 50 cent ride. However when I arrived to the bus stop, where the maquinas also pick up their clients, I met one of my professors.

Here was this man, who like your father served in Angola, whom I immensely respect and share a friendship with. I know him well enough to know that if I offered to pay his maquina he would say no.

What to do? Do I get in a maquina leaving him at the bus stop, and invite the symbolic representation of the real socioeconomic divide that exists between us? Or do I wait for the bus, notoriously slow and packed?

I opt for the latter, and take a spot behind him in line. And as the bus brakes wine to a stop I have this ringing in my ears of the emptiness of my attempt at solidarity.

This is the Cuba I live in. I’m rich here. I have a monthly budget that I would not survive a week on in the United States, but puts me several rungs above the Cuban middle class. The moral weight of this borders on injustice. I’m only a student. How can I live head and shoulders above people who have achieved much more than I can even aspire to in my time here on earth?

Then complicate the whole matter with the fact that I study here for free. Add to this that Cubans are left in my foreign, un-acculturated, hands to receive their constitutionally protected right to health care. Are you getting the picture?

Ivan, I’d like to think that you and I, as two young people who have left our lands of birth, are sharing similar experiences. But even in our shared ability to travel we still remain gulfs apart.

You arrived in your new country and worked from the bottom up, moving laundry. I arrived here looking down from my privileged perch. And even though I know resentment exists against students like me, studying here for free, even writing on this blog, I receive none of it to my face. And sometimes I wish I did, just so I could know I wasn’t feeling this for nothing.

So I’m left with an irresolvable quandary. How could I even argue that young Cubans should be able to say and do more on their own terms, seeing that I am benefiting from the same system that tells them “NO” way too often?

Yet I still come to Cuba, I come knowing I will have these feelings. My only reprieve are those moments where I’m learning medicine, interchanging with my peers from Cuba and around the world, and hoping that in my own country I can go back and change the things that need to be changed.
—–