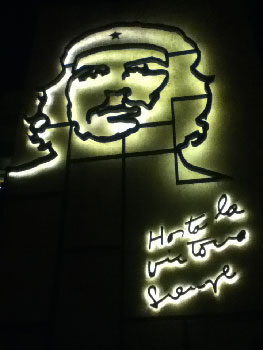 HAVANA TIMES — Anyone who comes to Cuba who isn’t part of a tour group has two pre-ordained methods of leaving the airport: a rental car (80-100 CUC a day) or a taxi (15-25 CUC).  To solve this problem I’m going to share some information on how to get transport to/from the airport to La Havana for only a couple of dollars, and maybe even pennies.

If you arrive from almost anywhere in the world to Havana your flight will arrive at Terminal 3 of the Jose Marti International Airport. As soon as you step outside there will be probably be lots of people, noise, exhaust and cigarette smoke. In the midst of this assault on the senses several people will persistently try to get you into a taxi. Resist the urge.

If you are arriving in the afternoon or evening you should wait near where the taxis load passengers (to the left of the main exit as you walk out) and try to get on the airport workers bus.

The workers bus is a long white bus (usually the kind that bends in the middle) and passes every half hour or so. It costs 40 centavos Cuban Pesos (0.40) or 5 centavos CUC (0.05) to ride.

The workers bus usually follows Boyeros Avenue (AKA Independence Avenue) all the way to the Plaza of the Revolution (with the tower and giant Che face). From there you should get off the bus at the National Bus Station where local city busses pass frequently. Check with the driver and/or other passengers to be sure of the route.

If the workers bus is out of action, or you are not successful in boarding, the other option is to get to Boyeros Avenue from terminal 3 and get a bus or maquina there.  The walk is not bad, about 2 km. Just turn right when you exit the airport doors and ask someone how to get to Terminal 2 following the airport access road. NOTE:  Don’t be surprised, or dissuaded, if the Cubans tell you it is too far to walk. For many people living in Havana walking more than 2 blocks is an unimaginable distance. 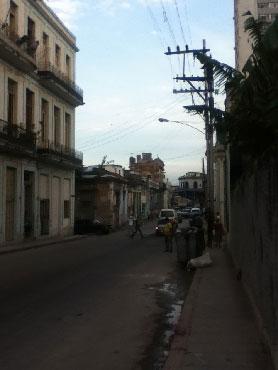 You can also get a taxi to terminal 2, which is on Boyeros, and should cost 0.50 or 1 CUC. Once at Boyeros find the bus stop for the P12 or P16, either of which will take you to the Plaza of the Revolution. If you get a maquina you will most likely wind up at Capitolio.  The bus costs 40 centavos Cubanos and the maquina costs 20 pesos Cubanos, respectively.

To take the city bus I usually go to the bus stop at Boyeros y Zapata (near Plaza of the Revolution) and get on the P12 or P16.  Both have bus stops near Terminal 2. As you are walking (less than 500 meters) from Boyers to Terminal 2 on the airport access road you will see a small bus stop on your right.  Wait there for a bus or maquina (collective taxi) to terminal 3.

You can also get a maquina to terminal 2 from Capitolio (near the Palacio de Computacion and the Parque de Fraternidad) or from anywhere on Boyeros Ave. Once you get to terminal 2 just repeat the same story as above: go to the bus stop and then get on transport to terminal 3.

There is also the option of walking to terminal 3 from Boyeros. Instead of entering the parking lot of terminal 2 keep following the airport access road (passing the big anti-imperialist and tourist billboards) until you get to Terminal 3.

Getting to terminal 2 from Capitolio via maquina takes 30-45min. The bus from Zapata y Boyeros takes 45 min to 1hr.  From there factor in walking and/or other transport to calculate how long the adventure will take.

If you bring your own bike to Cuba just assemble it and hit the road. Not a lot of shade. Plenty of nasty exhaust. Relatively little traffic.

If none of the above options work out, or you don’t feel like putting up with the hassle of cheap transport, you can still cut the cost of your cab by splitting the fare with other travelers.  It is best to coordinate this inside the airport at baggage claim, as outside the airport is hectic.

Not using taxis between the airport can significantly cut back on your arrival and departure expenses when visiting Cuba. If you know of any other ways to save money on airport transport please share in the comments.

12 thoughts on “To/From Havana Airport on the Cheap”