To my sister, Yasmin 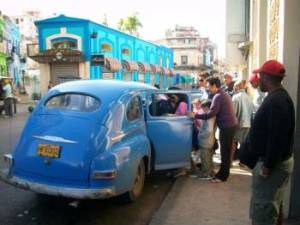 HAVANA TIMES — This is not a warning, no. It is exactly the opposite, actually: if you want to feel safe and enjoy a ride in one of Havana’s many traditional American cars, try and catch a ride in this woman’s cab.

I had the good fortune of meeting her a few days ago, when I decided to catch a cab to work. I usually take the bus, but I was running late and I opted to spend the 20 Cuban pesos that the ride from San Agustin to Vedado costs.

I admit I was somewhat surprised to see this petite, confident woman over 50, who turned from the wheel to greet me with a “good morning!” that was a bit too loud and merry for my still-drowsy mind.

Despite my surprise, I found the situation rather exciting. It was going to be the perfect opportunity to corroborate or discard (once and for all) one of the most deeply-rooted prejudices of our male chauvinist society: that women are terrible drivers.

Some blocks down the road, a couple stopped the taxi. When the girl was about to get in the car the gentleman who was with her noticed that they would be putting their lives in the hands of a woman. He took a step back, pulling his partner out of the car. The girl gave the driver a rather embarrassed look and shut the door.

The driver started her splendid Chevrolet and said to me: “What was that about? What, there’s not enough space in here? It’s probably because I’m a woman…shithead!”

It was the same word that had come to mind. I backed her up, saying: “Don’t worry. Now, they’ll take longer to get where they’re going.” We both burst out laughing.

I watched this woman closely throughout the trip. She would greet other drivers, State inspectors at bus stops and everyone who got in her car. When another driver let her get ahead or got out of the way for her to park, she would thank them profusely, gesturing with her hands and saying a heartfelt “thank you!”

At one point, she saved a stray dog that was crossing the street from getting run over, scaring it off with a wave of her arm.

To top things off, she didn’t charge a man for the spot his kid had occupied in the cab during their journey.

But what of the acid test? Was she good behind the wheel? How would she react to a complex traffic situation in Havana?

At the broad and complicated intersection where Havana’s ophthalmology hospital is located, I had the opportunity to find out. We crossed the light via the center lane (the avenue has three lanes). Another American car sped ahead of us on the lane to our left and tried to pull into our lane, almost hitting our car.

The driver couldn’t swerve to the right, as there were cars on that lane, so she honked, gradually slowed down and turned slightly right, avoiding the collision.

When she drove past the reckless driver, she yelled at him, irritated: “And people say women don’t know how to drive!” We had a bit of an exchange on the subject and continued on our way, while she regaled everyone around her with greetings and smiles.

Of course, I had no need of this experience to understand that our prejudices are unjust. It was, however, a healthy lesson that gave me additional proof of how ridiculous our discriminatory attitudes towards women are.