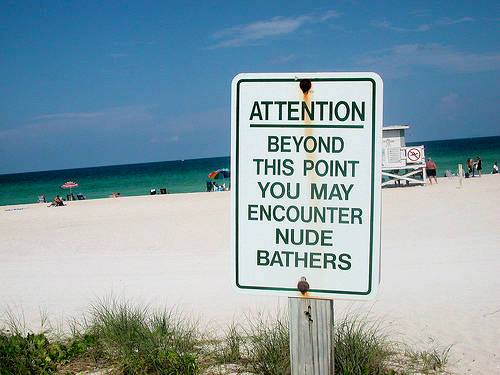 HAVANA TIMES — I am continuing my chronicles of my recent trip to the United States.

Luis, have you ever been to a nudist beach?

“Aren’t there nudist beaches in Cuba?”

“Yes, but they are restricted, very few people can go there and enjoy this privilege in Cuba.”

“And, why is that?” my host asked again. Then I gestured to him by rubbing my index finger against my thumb in a vertical manner.

“Ohh, I understand. Well before leaving for Orlando, we’ll take you to a nudist beach for gay people, and you know what the best thing is? We don’t have to pay a single cent, it’s free!”

That’s exactly what we did the following morning. On our way to our destination, fear and insecurity took over my mind, it would be the first time I’d be somewhere where everyone else would be naked in the light of day outside. “I’m going to feel intimidated a little, no doubt,” I told myself.

“And what if I have an erection, will the police arrest me?”

“As long as you don’t play around with your genitals everything will be OK, feeling excitement and other emotions when you see yourself before so many naked people is a natural reaction. Don’t worry, just relax and have fun.  I’m sure nothing will happen to you, you’re going to have a good time,” his words calmed me down a little.

We finally reached the beach. When I went over the line which marks where you are allowed to walk naked, I had a very strange feeling, minutes after freeing my body of all clothing. I felt a strange feeling of personal freedom which slowly filled my body with warmth; it was as if all my prejudices had been left behind on the other side of the dunes.

Nobody looked at me, everyone was busy doing their own thing, listening to music, sunbathing, or doing anything else in the water. In other words, I didn’t exist.

It was liberating to walk along on the sand naked, without fear of feeling harassed or the fear of being the laughing subject of the beach because of my physique. It’s true; these are irrational beliefs that live in the minds of all human beings, especially people who live in Cuba, a country which is led by a conservative regime who protects “Good habits and socialist morale.”

How interesting Cuba would be if it had access to an environment like this one!, I remarked to a couple of Cubans I met on the beach, to which they replied that: “While the circus of a country where you live keeps all of those old homophobes in leadership roles alongside their band of butt-kissing heirs, Cuba will never have access to places like this, at least not within the next 20 years.

“I think you’re right,” I said sadly, “I’m privileged to have been able to have access to something which costs a lot of money in the country I live in. But anyhow, you can be sure that I would leave written testimony about this experience,” I concluded.

When I left Florida’s northern beaches and headed towards Orlando, I reflected upon my identity as an individual: it was revealing to discover my fondness for nudism; it was a teenage dream come true for me; walking without clothes in the light of day. And to be honest, I never thought that I would walk along one of the most famous gay beaches in Florida in my birthday suit.

For many people, this could represent a conflict with the politically correct for Cuban society’s morals and behavior. On an individual level, I don’t think this is a conflict; it’s an aspect of humanity that deserves to exist.

I believe, as a non-heterosexual man, that living this very peculiar experience in the north of Florida was part of a learning process which helped me accept a feature of my personality that I didn’t really know. I came to understand that exercising my freedom in the public space not only has to do with words, it’s also about the need for the body to free itself of all material barriers, and to establish contact with Nature with the humility that we came into the world with. In this way, pay tribute to a better understanding of the wealth and diversity that this planet has where we human beings live. And the right we have to be and exercise our freedoms.

My journey continues, more adventures and new experiences await me.

6 thoughts on “Visiting a Nudist Beach in Florida”