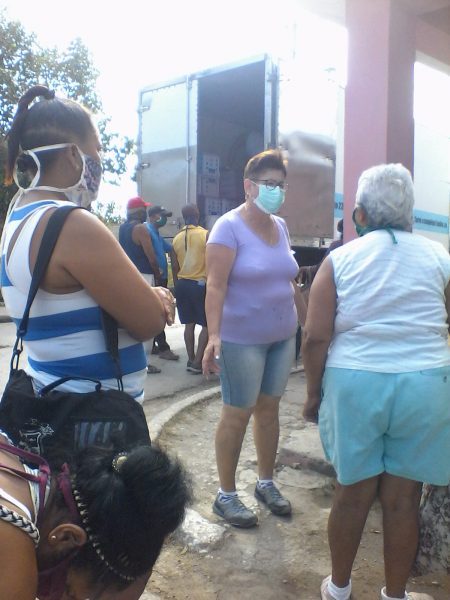 HAVANA TIMES – Eating breakfast is alien to many Cubans. Or maybe I’m wrong, a cup of coffee could be considered breakfast. Many people wake up and it’s the only thing they have before leaving to take on the day. I don’t know whether that’s because of individual shortages or because of the habit it has led to. A glass of milk is normally a luxury. Everybody knows that once you turn seven, it’s never a guarantee.

The bread rolls they sell every day, which were already bad, have gotten worse. It’s baked without oil and the official amount of flour. Many bakers steal resources for businesses or their own substenance. Adults give it up for children in the house. The best bread, which selling at 4 pesos (CUP) costs you an eye and a leg, isn’t available everywhere. It isn’t sold in Puerta de Golpe. Street sellers used to pass by and sell it for 6 CUP, but they don’t anymore… I think they got their licenses revoked.

This is why having breakfast has become a real challenge. It is also why soy yoghurt has become more popular in Cuba than reggaeton.

I can’t give up eating breakfast. I’m poor, but it’s something I’m used to doing ever since I was a child. So, this morning I went out to look for it. I didn’t have anything left in the house and you can’t find powdered milk even at spiritual centers.

When I get to the place, there’s a line going all the way from the park. There isn’t any yoghurt yet, but a truck should be bringing it in. I take my place in the line and stand in the best place I can. Drought has hit us hard. The grass has almost disappeared and trees are withered, they don’t give any shade really as all the leaves have fallen down.

“He who waits, gets desperate,” goes the saying, but I have learned to wait. I don’t have any other choice, nothing comes to me easily. I think about how alpha males shouldn’t have to stand in line and I smile. At least I’m still in a good mood.

An old man talks to another man about fishing, he says that quite a few fish are biting the bait. He seems to be an expert in the matter, and I keep myself entretained by listening to him. The much-awaited truck shows up an hour and a half later. While boxes of yoghurt packages are being unloaded, people start crowding around, anxious to buy.

Arguments begin, “that’s not your place”, “you’re cutting the line”. One of the sales assistants, a strong woman, comes out to put the line in order, demanding everyone keep 1 meter distance. She threatens to get the boss. The crowd starts moving back, reluctantly.

An old man who has difficulties walking, seems to be disorientated. He doesn’t remember who he’s behind and the line has become relaxed. Now, there’s another argument. I offer to let him in front of me but the strong woman tells him to go home, that the official guidelines are that people his age shouldn’t be going out, that somebody from the CDR will take food to him.

The old man argues back because apparently nobody has come to see him about this. I insist on letting him go in front of me, but some people behind me complain. Luckily, the old man was able to buy, and then it was my turn. They were only selling a one liter package per person.

When I finally manage to get out of that “dogfight”, on my way home, I remembered Pedro Juan Gutierrez’s “Cazadores de Mamut” (Mammoth Hunters), which is set in 1990’s Cuba. I think about how the country hasn’t changed that much in almost 30 years. We are still the same: mammoth hunters.

There are still shortages, which are only getting worse with the current pandemic. I think I saw a roll of old pita fiber with a fish hook in my room of solace. Maybe I’ll find it this afternoon, take out some worms and go fishing in the river.

2 thoughts on “Mamut Hunters and Life in Cuba”