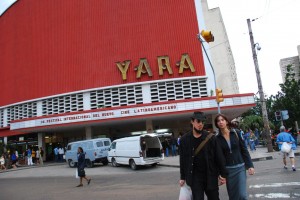 HAVANA TIMES — The managers of movie theaters in Havana’s Vedado neighborhood recently began to implement a “new policy” (I call it “new” because I had never suffered its consequences till now).

The policy consists in suspending the screening if there aren’t more than ten people in the theatre.

This past month of January, I had to endure this rather bitter experience on two separate occasions, and it strikes me as a rather worrying situation for those of us who love the cinema.

The first time, the film to be shown was Lourdes Prieto’s documentary on ICAIC’s Musical Experimentation Group. It was a rather cold Sunday evening and a number of us went to the Yara theatre in search of an interesting film or a place where could shield ourselves from the chill.

The movie was scheduled to start at 9, but they didn’t start selling the tickets until 20 after 9 (because, allegedly, there were still people inside, even though the comedy show they had gone to see had already ended).

Many of those waiting outside would walk up to the ticket booth and, on seeing that the film they were going to screen was a documentary, turn around and head off to the nearest cinema.

To cut the story short, only five people ultimately went into the theatre for the show which, after an exhaustive count of those present, was finally cancelled. The complaints of a young woman who claimed to have called the movie theater in advance to confirm the screening, the insults, laments and disappointed looks on the would-be spectators were of no use.

My second such experience took place on Friday at the 23 y 12 theater, where the film Gravity was to be screened. Fortunately, this time around, I wasn’t given the option of buying the ticket. A sign on the ticket booth announced that, if the show was cancelled, the theater would not reimburse patrons and would instead give them an “emergency” ticket. It was 8 pm and there were only five people outside the theatre.

Hastily, I ran a block over to the Charles Chaplin theater so as to catch the movie that’s about to start. When I get to the booth, I ask the ticket lady about the minimum number of people required for the film to be screened. She replies that they, being a cinematheque, only require one.

The way I see it, one of the most significant factors behind small turnouts at film screenings is the misguided and at times absurd programming, which doesn’t take the common audiences that certain theatres draw or the preferences of different kinds of spectators into consideration. A simple study on viewer preferences would suffice to remedy the situation.

The solution cannot be cancelling the screening, for, the handful of people who took the time to catch a bus in order to enjoy the few good films being screened today should not pay the price of the inept work of the officials responsible, nor get the brunt of the much talked about issue of energy savings.

The solution must be found in better programming, in cinemas that have proper and courteous services. The solution, above all, must come from a perspective that values cinema as an instrument for human growth.

While I await for this utopian scenario to become a reality, I set out in search of friends willing to accompany me to the theatre, such that, the next time around, there are at least more than ten people in the cinema.