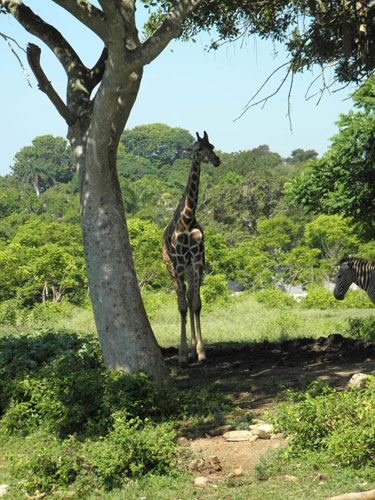 HAVANA TIMES — Last week, my son Rogelito, my wife Yasmin, her mother Silvia and I went to Cuba’s National Zoo. I will use some of the many pictures we took to accompany my impressions during our outing.

The zoo is located in Havana’s south-laying suburbs. It was built in the 1980s as part of the fair-related and recreational projects then undertaken in the Cuban capital. It was seen on the news some months ago, when a large number of animals were imported from African countries. Operation “Noah’s Ark” was celebrated by some and lamented by others.

A city bus takes you to the zoo, but its service is lousy. Most people drive there in their cars or on excursions. We made a reservation with an excursion bus. The price of the round-trip per person is about twice the average daily salary in Cuba. As you can appreciate, it’s not a trip one takes frequently.

Our trip to the zoo “treated” us to some rather unpleasant moments. We had to stand in three annoying lines: one to get inside the facility, another to purchase the tickets for the tour and another to board the buses. You have to appeal to your sense of patience in order not to grow irritated. We saw a number of bitter disputes among people as a result of the long line-ups. 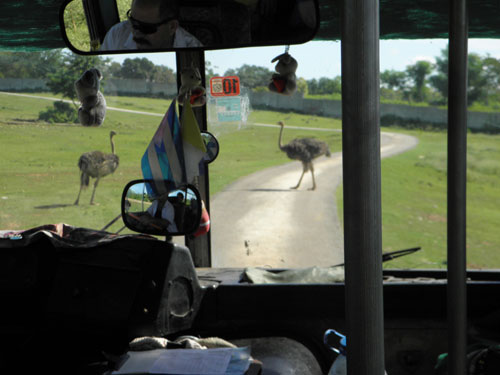 The vehicles used for the tour of the zoo are small Giron-brand buses assembled in Cuba more than 20 years ago. It is incredible they’re still rolling. Inside, a guide offers passengers the pertinent explanations. Having to speak over the loud noise of the engine without a microphone, these guides make a considerable effort whose long-term consequences are rather worrying.

The tour is actually quite pleasant. To the eyes of the lay-person, the animals look very relaxed in the area called the “African Plain” – a very large expanse of land with plenty of natural vegetation. Walking across the area could take someone nearly an hour. The guide explained to us that, during the night, the animals are relocated to a smaller, more confined area. I don’t imagine hauling the zebras and ostriches over to that place proves that difficult, but I do believe the rhinos must pose a bigger challenge. 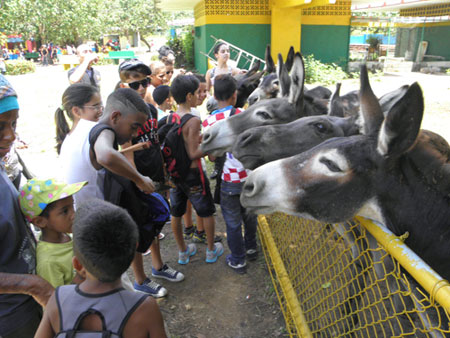 The lion pit is the second highlight of the tour. It is far smaller than the “African Plain.” More than half of the lions on display at the zoo are there. There is a total of around twenty lions, the largest population in a Latin American zoo, according to our guide. As one enters the area, passengers are asked to shut the bus windows.

After this part of the tour, visitors are dropped off at a recreational area where there are several options. There are a number of cages and pools with more animals. These animals don’t look too happy (with the exception of the donkeys, towards the end of the facility). The happy little donkeys are one of the highlights and most blatant irregularities of the zoo. Visitors give them food indiscriminately, and the animals eat from the hand of the undisciplined public. Though it is something to be ashamed of, Rogelito and I took part in this, offering the donkeys bits of bread, to my son’s (and the donkeys’) great satisfaction.

The other options include cafeterias and an amusement park. There are stands offering a small variety of junk food at the high prices one comes across around Havana. At the amusement park, the swings and see-saws originally installed there co-exist with inflatable castles, elastic beds and rustic carrousels assembled by the self-employed.

After Rogelito had enjoyed the reasonable and balanced offers our budget could afford, we boarded the tour bus and headed back to the entrance of the zoo. Our bus arrived shortly afterwards and we returned home.

4 thoughts on “A Tour of Cuba’s National Zoo”