HAVANA TIMES – Anyone taking a look at modern-day Cuba, especially from my generation (young people born in the new millenium), can see that we are in a place that isn’t heading in any clear direction.

Political, economic and socio-cultural shortcomings have been the reason for the birth of people within this society who, if I had to describe them, would compare them to empty shells or children of a Homeland they weren’t born to.

GPS Teatro troupe is one of these compasses that uses the language of art, to steer us towards a path of mental and spiritual salvation in the face of an imminent and uncharted emotional release. With the adaptation of a play by Virgilio Pinera, it is now showing “Arropamiento”.

It is a critical piece about the loss of one’s own identity after adopting collective values, a characteristic phenomenon of societies with Communist norms that don’t boost a person’s individuality but instead create large dependent masses.

Arropamiento shows us how our young people prostitute their own personalities so they can be accepted within certain social groups, revealing that the end is the most important thing, and they will do everything they can or can’t to make their trivial dreams come true. They undress this reality where if you aren’t (perfect or beautiful) in people’s eyes, you don’t matter.

They use symbols on stage such as the representation of a mandala where the actors will be. It shows us these vicious cycles where histrionism voids introspection. It doesn’t matter who you are, what’s important is how other people see you and so human beings cover themselves up in layers, oppressing their true selves.

This play is a representation of this showbiz, glitz and glam lifestyle which so many people aspire to, guided by paradigms that aren’t in keeping with Cuban reality. Rei Castaneda, the set director, exposes the champions of this false reality in Cuba, with sarcasm, but also in an intelligent manner to sponsor a mise-en-scene that will uncover them and reveal the lies that they sell to the masses.

Arropamiento is an optimistic critical play, because in spite of showing us just how low we are as a country and in cultural terms, it also gives us the solution to the problems it presents. It presents humans as beings that can be saved if they want to wake up and look within. The actors who are young people waking up from this great dream, understand the phenomenon the play talks about and they play their roles with the utmost sincerity, taking the audience on a journey of self-reflection, which is really needed right now.

The next performances of this play will be the last week in January at one of the Linea avenue theaters (Raquel Revuela, Llaurado or the Ciervo Encantado). 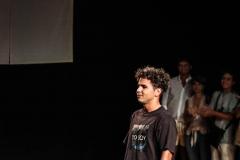 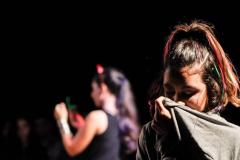 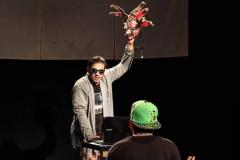 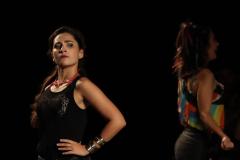 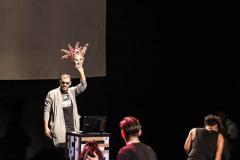 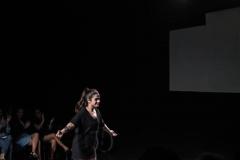 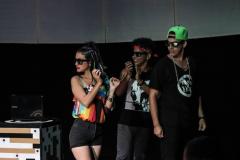 One thought on “Covering Up for a Naked Society”

Dom Salvador – Song of the Day