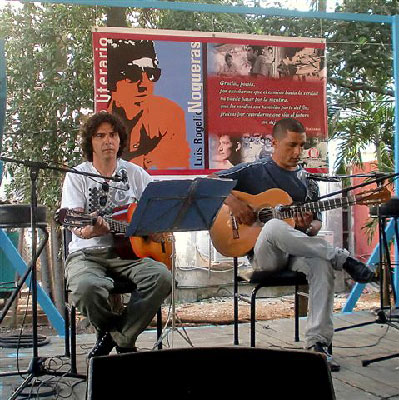 HAVANA TIMES — It has been said that the pieces written and performed by Cuba’s Duo G.Lo music band are a kind of “poetry in music.” Those who have had the opportunity to catch a performance by this duo, created by Lazaro Valladares Mederos and Jorge Luis Torres Morejon in the town of Regla, La Habana, in October 2005, can attest to the truth of this statement.

The band, which musicalizes the works of renowned poets from Cuba and around the world to create many of their pieces, describes itself as an heir to the “best of Cuba’s new folk music movement.”

Though its chief concerns are eternal issues such as love or daily life, the band also casts a critical glance at social reality and some of its lyrics question the span of history that they have lived.

The duo has shared the stage with important figures from Cuba’s music scene, such as Gerardo Alfonso, David Torrens, Ireno Garcia and others. They have also composed pieces for films.

The band participates in important socio-cultural events held in Cuba, such as Havana’s International Book Fair.

Logica de lo ilógico (The Logic of the Illogical)

I laugh so as not to cry / I live so as not to die / I work but see no money come my way / as the rope is tied around my neck / I have nothing but I’m not poor / you have everything but aren’t rich / I don’t understand and try to comprehend / I do not believe, but kneel down and pray / I am not blind, but cannot see / I am honest but I am forced to steal / I am sad but I have to laugh / I am not deaf but cannot hear / you lie but know the truth / you say things I cannot speak about.

Give me a chance to think how I will punish myself / for wanting to betray you, and I will try to understand / the logic of the illogical / if this world is upside-down / the right thing would be to live a bit more comfortably / and for you to stop speaking of the past, when the present slips through our fingers / pretending we love each other, you, who are someone, and I, who am no one to judge / the logic of the illogical.

Whenever I read a poem, listen to a song, or see a play that tries to capture the absurdity of life, I think of Kafka. His novels are tableaus that portray our world with a monochromatic, gray and opaque palette.

The lyrics of this song evoke a similar emotion. The writer, in this case, isn’t a Czech novelist writing about the world of the early twentieth century, but a young Cuban writing in the early twenty-first century, asking himself question after question, racking his brains to understand the absurd world that surrounds him.

This process leads the author to affirm: “I do not believe, but I kneel down and pray.” Might this be his last option, before going mad? The absurdity of the world is also presented here in the form of the author’s moral degradation and hypocrisy, expressed in such lines as “I am honest but I am forced to steal”, “I am sad but I have to laugh” and “You lie but know the truth.”

The song expresses a concern over the future. We should, however, avoid the temptation of trying to put a face on the subject (or thing) the singer addresses, as the solution to the problems described here, the problems of existence, do not depend on a single person.

In the world’s cause-and-effect chain, in the complicated tangle of passions and unpredictable circumstances we find ourselves in, we end up chasing ideals that always get away from us just when we’re about to grab hold of them.

Such ideals, be them justice, absolute truth or freedom, give our reality its absurd quality, and, in the midst of so much confusion, make people give up after a prolonged struggle, resign themselves to finding some kind of logic to that which they know has no logic, assume an attitude which consists in accepting everything that surrounds them.
—–

(*) Cuba’s Musical Bridge: This post is part of a series aimed at encouraging exchanges between people from all corners of the planet. I intend to write using simple, straightforward language to have news about Cuban songs – songs that, owing to commercial limitations and the difficulties involved in their translation, sometimes remain in the shadows, even though they are true gems of Cuban culture – reach anyone who’s interested.