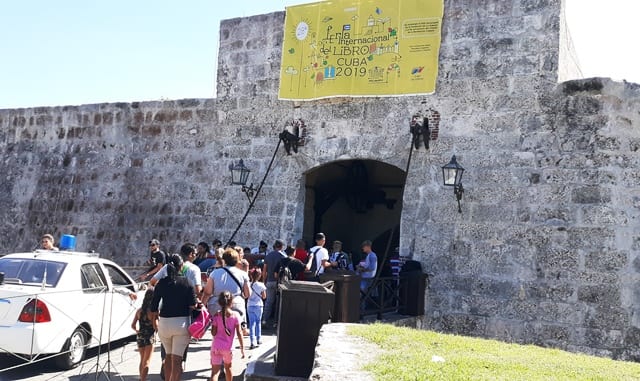 HAVANA TIMES – The unusual invitation to Algeria as the guest country of honor of the Havana International Book Fair 2019, together with the presence of other Islamic countries such as Iran and the United Arab Emirates, all producers of hydrocarbons, but few books to offer to the public, gives a distinctive note to the February 7-17 cultural event in the Cuban capital.

The morning of Friday the 8th was the first day of sales at the Fair, located in a large area in and around the La Cabaña Fortress, a military-historical park that covers a dozen hectares in its interior. There, according to the organizers, are stands corresponding to more than forty countries, representing dozens of foreign publishing houses, together with Cuban ones, the latter all state run.

If the visitor is eager to obtain Arab literature, not normally available on our island, and thought to take advantage of the occasion by the special invitation to Algeria, there was only disappointment. The area dedicated to the Algerians is only on exhibition, with no sales whatsoever, in addition to offering only a scant sampling in Arabic and certain texts in French.

According to what a Cuban explained to the visitors, the books there will be “all donated to the Jose Marti National Library”, with no options for acquisition by the public.

Nearby, in the adjacent corridor, are small exhibitions from the United Arab Emirates, South Korea, Iran and Bolivia. Of those four countries, only the Iranians offer literature in Spanish. Rezashia, a kind representative of Iran, facilitates the free copying, at the moment, of hundreds of digital books on telephones or computers, while Bolivians accept orders that their embassy in Havana will later respond to.

The question is why Algeria? if not even one book of that country is possible to acquire at the Fair. A possible response points towards the undoubted friendly gesture, lets say diplomatic, towards a country with which Cuba has renewed its relations of more than half a century, now under the concrete expression of oil for doctors, an imperative need of the Cuban government, considering the growing Venezuelan crisis and the cancelling of a lucrative export program of doctors on contract to Brazil.

Agreements between Algeria and Cuba have been announced in a timely manner, the number of barrels exceeded two million last year. [At the height of its’ doctors for oil program with Venezuela, Cuba received an estimated 36.5 million barrels a year.] In the same way, although applying other variants, Havana approaches other Middle Eastern countries with oil, offering its Health professionals as a commodity of exchange. [Under such contracts the Cuban doctors only receive a small percentage of the amount designated for their services, the lion’s share going to the Cuban government.]

Of the rest of the Fair, let’s say that the offers of books dedicated to children stand out, without a doubt, the highest percentage of what is sold in such a large exhibiting area.

A special mention for Peru, a country soon to reach twenty years of permanent presence at the Fair. It’s booksellers were at the forefront of children’s literature with at least six sales points, as well as their stand with the smallest books in the world.

Miriam Lopez, of Corporacion Editora Chirre SA, leader of didactic editions in Peru, has also been at the annual Miami Fair, and when comparing both events she says: “In Miami we do more promotional work, there is a lot of influence from the digital world, even school tasks are solved by Internet, here I take advantage of an area twice as large and we sell very well. ”

When comparing prices between foreign and Cuban publishers, at least in terms of children’s literature, no notable differences can be seen. The Peruvians sell their short full-color comic books, folding in a third dimension and similar attractions for between 1 and 3 CUC equal to dollars, similar to what the Cuban government stands charge.

Other literature of national production is limited to the moment of the book presentation. Then there are the texts of political propaganda, example Ocean South Press, whose offers seem aimed at tourists, of which few appeared on Friday the first full day of the Fair.  No book by Che Guevara sells for less than the equivalent of 5 dollars, just short of a week’s salary for the average Cuban worker.

The counterpart to the shortage of literature occupies a large esplanade completely covered with tents, where the food stands are concentrated. It is accompanied by the attractive location of various mechanical rides that has turned the place into a real amusement park. At first glance, the concentration of the public is much greater in these areas than in the interior, dedicated to books.

A row of buses continually moves users on the obligatory round trip from the city through the tunnel that crosses the entrance channel of Havana Bay.