HAVANA TIMES, July 15 — “It’s not bad” or “I busted up laughing”.  Those were the kinds of statements that could be heard from many people coming out of the cinema after the opening of the latest Cuban movie.

Our film directors like to use comedy as a vehicle for reflecting the national situation.  This time, Daniel Diaz Torres, the director of Alicia en el pueblo Maravillas (Alice in Wonderland (1991), again employed that art form and gave us a film that speaks of the recent past while winking at the present.

In it, the make-believe town of Veredas del Guayabal is besieged by nuclear rockets.  The Soviets are the townspeople’s ally-godfathers as those inhabitants are living in the vortex of powerful social changes.

There, Lisanka (whose name reminds us of the obsession that the island experienced for several decades with anything that came from that Slavic land) is herself besieged by the love of two young men, and then there appears a third: a Russian comrade.

This, 1962 (“The Year of Planning”), is a year like many others: convulsive and dangerous as no other in the past.  The Missile Crisis has taken place in which Cuba had balanced on the edge of nuclear devastation.

The Cuban people, however, immersed in the ideological battle of a nascent revolution, did not perceive the great danger that surrounded them (a violent class struggle existed in the country, where bands of counter-revolutionaries operated, and conflicts occurred with sectors of the Catholic Church).  They sought to face the times with the same intrepidly and naiveté of a teen who arrives at adolescence without knowing exactly what it is.

Amid this crisis, there of course took place other smaller ones – ones that were more personal…more human.  Daniel Diaz Torres chose to narrate that of Lisanka.

Based on a story by Francisco Gonzalez, At Kilometer 32 we are shown a girl full of excesses.  Though no one doubts that some people like this existed, such a free spirit and open personality wasn’t common during a time when machismo radiated everywhere. 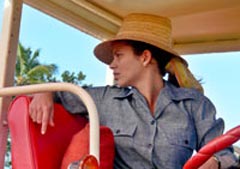 Just like Cuba, the young woman confronts prejudices, the political labels that were coined back then, gossip and the ill-intentions of neighbors.  Despite this —sitting on top of the tractor that she drives— Lisanka feels free, independent, empowered, able to decide her own life (though the truth was that she was more dependent on Kennedy and Khrushchev, who were ready to do anything to demonstrate their ideological and geo-political supremacy).

The two men say they love Lisanka; during the revolutionary war against Batista, one was a guerilla in the Sierra Maestra Mountains, while the other fought in the city, with the movie depicting the rivalry between the two.   However, they only want to possess her as if she were an object.  This, though, is something she can’t put up with; she wants to be valued as human being and to grow spiritually.

The times are reflected by the other characters: the soldier who became disabled while completing a mission, and another one who is active and needs to fulfill his revolutionary duties at every moment, though that takes away time from taking care of his daughter.

The town prostitute tries to integrate herself into the changes but she’s not accepted, and the script writers preferred that she die.  Perhaps this was for the sake of paying a kind of homage to people who never fit into the changes of that time, because it was the society itself that wouldn’t allow it.

One of the best moments in the film is the reception of the Soviets.  In a scene full with irony, humor and absurdity, the Cubans win in a game of tug-of-war and the political leader informs them that for the next one the Russians should win, even though the competition is in dancing the rumba.

Beyond the laughter and the fine performances, Lisanka serves to remind us of a time when we did in fact live in danger.  Though it’s not a historical movie, the context in which this threat is developed is very well reflected.

Narrated as a fable, some scenes make us think of a film from the past seen from the present, something which captures the attention of the younger audience.  Perhaps some time another movie will be made about the events of the Missile Crisis, but one that’s a little more serious.