HAVANA TIMES — The Cuban government has set an ambitious construction project in motion. Headed by the Ministry of the Revolutionary Armed Forces (FAR), the project is aimed at building thousands of homes for military officers and civilian employees in urban areas.

The construction of these Military Cities (MC), as the projects are known, began two years ago in three capitals around the country: Havana, Santa Clara (Villa Clara) and Santiago de Cuba. According to sources linked to these development plans, some 1,500 apartments have been constructed to date.

Havana’s military residential complex is located at the intersection of 100 and Aldabo, in the municipality of Boyeros, across from Cuba’s largest criminal investigation and processing center.

According to a source close to the contracted construction firm, 30, 10-apartment buildings are already occupied, while a total of 50 buildings are planned.

“This is one of the largest construction projects undertaken by the FAR in the past twenty years,” said the source, who chose to remain anonymous. “We’ve built several building complexes like these in different cities around Cuba, but we’ve never built as many before. The idea is to at least satisfy the need for a home that military officials and civilian employees have.”

In the past, Cuba’s FAR constructed apartment buildings and residential complexes for its officials and employees around the country, but without the degree of planning that has gone into those being built today.

The source added that a new, advanced construction technique is being used for these new projects. The technique consists in using steel panels and wire-rod grills covered with concrete, a procedure that makes the buildings stronger and the construction process more efficient, allowing contractors to make far quicker progress. 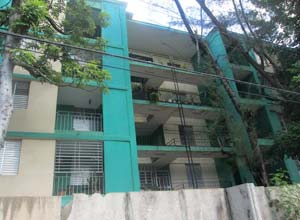 The two and three-bedroom apartments are equipped with a reliable water heating system which employs solar panels.

“We are currently working on the internal streets connecting different apartment blocks and completing three other buildings which are almost ready for delivery,” the source reported.

The Havana military housing complex is located on the lot of a former supply and logistics military unit, which was deactivated as part of the “restructuring” process the FAR has undertaken to optimize operations. The 1.5-kilometer-square area borders with the Enrique Cabrera National Hospital.

According to the interviewee, there are currently no plans to destine any of the apartment blocks to civilians who are not directly employed by Cuba’s Armed Forces.

While passers-by in Havana gawk at the rapidly-growing complex, a similar plan, aimed at constructing 60 buildings with the same characteristics, is underway in Santiago de Cuba, Cuba’s second largest city.

To date, 30 apartment buildings are being built in the 30 de Noviembre neighborhood and an additional 30 in the Abel Santamaria, neighborhoods located on the outskirts of the provincial capital.

The projects are prioritizing the housing needs of FAR officials and civilian employees whose homes were damaged or destroyed by hurricane Sandy, which lashed Cuba’s eastern region in October of 2012.

“They are building at an incredible speed,” Rubersys Urgelles, who resides in the vicinity of the Abel Santamaria complex, told CafeFuerte.

Urgelles says he has never seen such a pace of construction before.

“They take less than a month and a half to finish a building and they’re working at a frenetic pace, with long work days. That angers me some, because there are hundreds of families here in Santiago de Cuba who lost everything and have been living in a shelter for more than a year. I saw how one of the new apartments was given to a non-commissioned officer who recently graduated from the academy and who was living with his parents in a good house,” he said.

It is said some 50 buildings are being built in the military complex located in Santa Clara, though this could not be confirmed in person.

The reactions of locals on hearing of the MC projects go from surprise to indignation.

“It’s affronting to see so many people with housing problems and the military boasting of their power in front of our faces. It’s as though they were saying that we are nothing unless we join their ranks,” Rodolfo Hurtado, a 69-year-old pensioner commented.

Yordan Calama, a FAR major specializing in logistics, received one of the apartments built in the neighborhood of 30 de Noviembre, in Santiago de Cuba. He insists each and every one of the officials given these properties have earned them through hard work.

“Nothing’s been handed out. We’ve had to make many sacrifices, night and day, to fulfill our missions and to remain loyal to the revolutionary leadership. Every one of us who’s received a home deserves it,” the official stated.

However, no few complaints about unequal treatment and the squandering of materials have been heard. One of the residents of Havana’s neighborhood of Alta Habana commented she knows of a family of military officers, the members of which all received an apartment in the complex located at 100 and Aldabo Streets.

“They gave one family five apartments, because they’re all FAR officials. That is unfair and unacceptable. We can’t sit by while they rub such things in our faces,” the source, who asked not to be identified, said angrily.

According to data published by Cuba’s National Statistics Bureau (ONE), approximately 20 thousand families are currently living in temporary shelters and some 10 thousand have moved into the homes of relatives.

Many people living in shelters have had to wait 15 years for the government to offer them housing, and the construction of residences for those who lost their homes continues to advance very slowly.

Cuba’s housing infrastructure – with 40 percent of homes in regular or poor state – is currently among the most deteriorated in the continent. A total of 8.5 out of every 10 buildings in Cuba are in need of repairs.

Recently, intense rains resulted in the collapse of 227 buildings around Havana (26 of which are considered irreparable) and forced authorities to evacuate 2,240 people. Two people died when a building collapsed in the neighborhood of Centro Habana, one of the most vulnerable in the city.

Cuba’s housing shortage exceeds that of 700,000 homes, but the country builds a mere 32 thousand a year.

In addition to the MC project, the Armed Forces have undertaken other, smaller construction projects. These are being executed parallel to the efforts of the Ministry of the Interior (MININT), which is also constructing residences for its officials and civilian employees across the country.