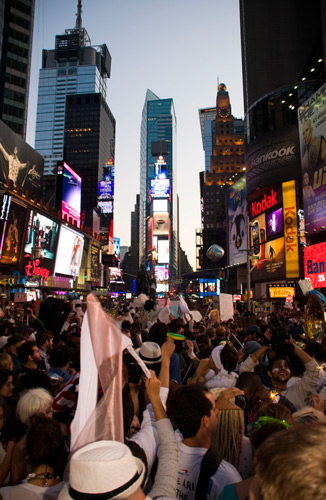 His call came from the center of a throng of Occupy Wall Street supporters echoing through the cheering crowd in waves to those several blocks away. This was only one of a dozen slogans, chants and songs emanating from Occupy Wall Street’s “United for Global Change” rally in Time Square last weekend.

Saturday was called the Day of Action, from thousand-strong marches to Open Forum discussions to mass bank withdrawals and account closings, culminating with the Occupation Party in Time Square that night. Despite an alarming presence of NYPD donned in riot gear maning the barricades lining the avenue, the prevailing atmosphere of the scene was both overwhelming and good-natured.

What made Saturday such an enormous success however, was the manifestation of the movement’s global reach. Early last week, OWS called out to its fellow US Occupations and those in cities around the world to join them in a united rally amassing in an almost exclusively peaceful demonstration for political and economic reform in 951 cities in more than 80 countries across six continents. 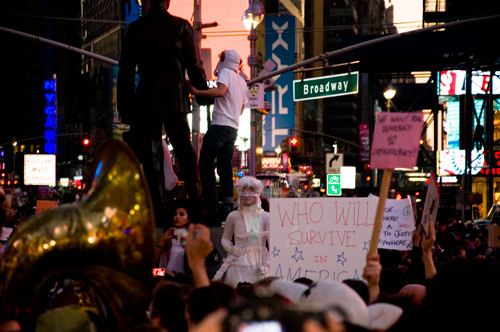 Saturday night’s Occupation Party was not only the largest gathering to date of Occupy Wall Street’s demonstrations, but also a leading international symbol of citizens peacefully assembling and calling for change. It was also a party complete with music, costumes, balloons, sparklers, and dancing.

And after nearly a month of daily working group meetings, general assemblies, marches and rallies interrupted with questionable police actions – all the while sleeping in a crowded outdoor space – it seems OWS was due for a night on the town.

And, with similar occupations sprouting up from Little Rock, Arkansas to the Philippines, it’s unlikely the party will be ending any time soon.