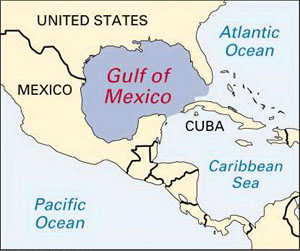 HAVANA TIMES, Oct. 29 (IPS) — The discovery of a significant offshore oilfield in Cuban waters in the Gulf of Mexico could persuade the United States to modify its policy towards the Caribbean island nation, experts say, while warning that this possibility could also entail risks.

“When there are important economic interests at play, in terms of market and resources that are strategic for Washington, the ideological components that have driven U.S. Cuba policy come tumbling down,” Cuban academic and researcher Luis Rene Fernandez told IPS.

The expert explained that he is not saying the four-decade embargo will be lifted “overnight, but it’s obvious that these interests will start lobbying to eliminate the restrictions” that prevent U.S. companies from participating in a possible oil boom in Cuba.

“Because it is such a major resource, and if the oilfields discovered are, in fact, truly significant —both in size and in the quality of the reserves—, then that play of forces will be unleashed,” noted Fernandez, assistant director of the Centre for the Study of the Hemisphere and the United States (CEHSEU).

Cuba, which currently produces some 80,000 barrels a day of high-sulfur heavy oil, that covers half of its domestic needs, is now focusing on the abundance of oil that is thought to lie under the seabed of its exclusive economic zone (EEZ) in the Gulf of Mexico.

Rafael Tenreyro, director of exploration at Cupet, Cuba’s state petroleum company, said the area has a potential yield of more than 20 billion barrels of extractable crude, an appealing hypothesis that could be confirmed once the Spanish oil company Repsol resumes its drilling operations in mid 2009.

The Spanish firm was the first to take on the challenge posed by Cuba in mid-1999 when it opened up a bidding process for 59 exploration blocks in a 112,000-square-kilometer area in Cuban waters in the Gulf of Mexico, which is bordered by Mexico and the U.S.

The consortium, which two years ago formed an association with the Norwegian oil firm Norsk Hydro and India’s ONGC Videsh to explore six blocks in Cuba’s EEZ, drilled its first oil well in 2004 with a result that only partially satisfied initial expectations and was considered unprofitable.

Besides Repsol, companies from Norway, India, Malaysia, Vietnam and Venezuela are involved in projects in the EEZ, while Canadian, Vietnamese, Chinese, Venezuelan and French companies are working in what is considered the most promising area, the northeast coast of the archipelago, both on land and offshore.

The heavy crude strip stretches over more than 118,000 kilometers between the Havana and Cardenas Bays, in the western province of Matanzas. It has been divided into 43 blocks, 15 offshore and the rest on land. Of that total, 10 have already been awarded to companies, one is under negotiation, and 32 are still available.

Brazil’s Petrobras and similar companies from Russia are also presumably interested in participating.

“Negotiations with Petrobras have advanced considerably and we hope to have good news soon,” Tenreyro remarked to foreign correspondents during a recent tour of several wells in full operation.

The expert, with 35 years of experience in the oil industry, acknowledges that the U.S. embargo “entails an additional difficulty” for Cuba’s oil business partners, but says that, at the same time, for U.S. companies it means missing out on good “business opportunities.” 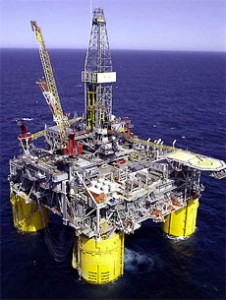 Others also alert against the potential risk that Cuba would face if it turns into a significant oil producer, being located so close to the United States. Fernandez believes that a military attack from the U.S. is a possibility that “can never be ruled out,” although he doesn’t see it as likely in this case.

In his opinion, “the possibility of a U.S. military intervention in Cuba would increase in the event of an acute economic crisis accompanied by social unrest and the government’s inability to control it,” and such a scenario would involve relatively low costs for Washington.

“An oil boom, in contrast, would lead to a major improvement in living conditions in general, the country would be strengthened economically, politically and socially as a result of the availability of large oil revenues, which would also provide a significant degree of ‘invulnerability’ and development capacity,” Fernandez added.

In this sense, the country would bolster its “defense capacity and, naturally, the people’s support for the cause of resistance” would be boosted, concluded the expert, for whom U.S. strategists should take into account the impact that a fiercely-fought war so close to home would have on their national security.

In the late 1970s, the United Nations Convention on the Law of the Sea established a 200-nautical-mile jurisdiction for coastal states, based on which an EEZ is created, where the country enjoys sovereign rights over natural resources.

The sea border that divides Cuba from the United States, as well as Mexico and other neighboring countries, was traced in the early 1980s. The fact that the area is surrounded by mature oil fields stokes Cuba’s optimism about its potential for crude and gas production.

One thought on “Oil Could Thaw US-Cuba Relations”