HAVANA TIMES, May 26 — The Cuban government has expressed its desire to look to the earth for the production of food as a strategy for survival and sovereignty.  The recent agreement of the Council of Ministers (yet to be put into practice) authorizing the granting of credit to campesinos, among other rural people, is evidence of this interest.

In that way, this body proposes to offer important backing to the fifth link in the chain — concept, design, development, production and commercialization — that makes possible the sale of agricultural implements in the countryside.

See: Putting the Cart Behind the Horse Part 1

But that last link has not met with much luck since efforts around it began this past December.  This has been due basically to the high prices of farm implements, according to the results of a recently conducted poll among farmers from different provinces.

“The impossibility of offering loans to producers put a brake on sales through the Campesino Program.  We’re sure that as soon as farmers are able to access government loans, we’ll see a marked impact on sales,” stated Guillermo Perez Tres Palacios, the commercial head of the Logistics Management Group (GELMA) of the Ministry of Agriculture.  Through its provincial companies of agricultural supplies and transportation, this entity is in charge of marketing agricultural instruments produced by the ironworks industry.

Of the 25,000 produced up until the end of April, only 36 implements had been sold in eight provinces for a total value about 158,000 pesos ($6,320 USD), with the majority purchased in Santiago de Cuba.  According to Tres Palacios, all production entities linked to agricultural activity can acquire implements through the traditional contracting mechanisms.  “Our farmers extension centers have all the documentation and legal experience to market them.”

However, implements are not included in the system for sales for convertible pesos, which provides an added incentive to producers to sell their produce to the government.  As a part of that program, the extension centers offer batteries, tires, chemical products (such as the herbicide “potreron”), as well as spare parts and other items.  However several campesinos who were consulted said they have accumulated hundreds and even thousands of convertible pesos in their accounts but they don’t have anything to spend them on, since the selection at the extension centers is so paltry.

The majority of the developed countries invest major sums of money to subsidize their agriculture production, because they find it cheaper than importing food.  Responding to that issue, Tres Palacios passionately defends the idea of selling these implements without subsidies, arguing that “it’s the first time campesinos have the possibility to satisfy their needs personally, without having to hope for assignments, planning or vertical decisions.  They have them within arm’s reach in the 140 municipalities with agricultural areas.”

“Our task at this moment is to push the commercialization of these implements.  We have to promote them along all paths: participating in events, organizing exhibits, printing flyers, talking with the heads of different production entities and with the mass media.”

“It would help a lot to professionalize promotion,” he added.  “We need to generalize the experiences of those furthest ahead, like our comrades in Santiago de Cuba who — despite not having great agricultural potential — have sold 40 percent of all the implements marketed nationally.” 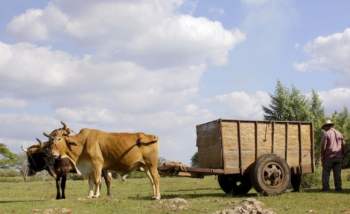 “Some people can say that they’re expensive, and that’s true if you compare them with products that were subsidized; but if you analyze their quality, functionality and useful life, the investment is worth it.  The outlay is recovered is a very short period.  In any case, the management of the Ministry of Agriculture gave us the task of analyzing costs so as to try to reduce the prices.

“We have been directed to provide ongoing services to the buyers by publicizing post-sale services in repairing and providing maintenance to those implements in all the provincial repair shops.  We work so that our extension centers in the municipalities become integral logistical units, and offer a wide range of services to the campesinos,” Tres Palacios pointed out.

“Starting in May we’re going to produce in our companies’ shops and market at the extension centers all of the new products in the Campesino Program.

Beginning this year, we’ve also planned to sell irrigation systems, forage choppers, wind mills, wagons for horses – all nationally produced,” the director concluded.  His agency has been invited to renew its contact within a few months to evaluate the commercial efficiency of this indispensable impetus of Cuban agriculture.

Meanwhile the producers will continue looking at the bulls from behind the railing, or rather the horses from the cart, trying to prevent the wagon from running over the animals as a result of unwise decision making.