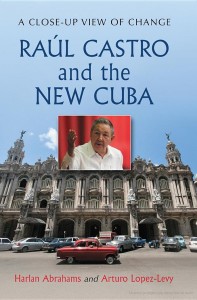 HAVANA TIMES, 31 enero— Finally, a book about Raul Castro! Well, sort of. Although the most entertaining parts of Raul Castro and the New Cuba: A close-up view of Change* are the glimpses into the personality of President Raul Castro found in co-author Arturo Lopez-Levy’s reminiscences of his own and his family’s personal interactions with the younger Castro, this is no biography.

Instead, the book primarily seeks to assess the changes in the governance of Cuba and in the lives of the Cuban people since the retirement of Fidel Castro and to come in the near future. However, the authors chose to go about this in a meandering way.

The main writer of the book Harlan Abrahams, a lawyer and novel writer, invites the reader along for a series of visits to Cuba during which he casually probes the opinions of various Cubans he meets along the way.

Unlike most authors who write about Cuba, Abrahams does not try to mask the strong ideological bias he carries into this endeavor. Instead he blatantly asserts his opinions, assumptions and conclusions right up front in chapter one, with scarce argument or evidence.

Throughout the book, his prejudice is unmistakable in statements such as, Elian Gonzalez’ father “seemed to be a good fellow, even if he was a communist.”

In addition he falls into the same bad habits of most US authors who write about Cuba. He presents impromptu conversations as profound insights into Cuban reality, he repeats outlandish stories fed to him by former Castro colleagues with an ax to grind, and he continually uses the word “America” to refer to a country rather than a continent.

Most disconcerting for me was his account of a conference held at Queen’s University in Canada in 2009. Abrahams first admits to barely attending the event, but then proceeds to bash it as a Cuba love-fest. I attended that conference and his assessment is way off. This leaves me skeptical about the accuracy of the informal interviews he reconstructs in this book.

Luckily, the vignettes and political analyses of the coauthor rescue the reader. In contrived discussions between the two authors, Lopez-Levy eloquently and methodically clarifies important episodes in Cuba’s history, identifies and explains the motives of current key actors (some scarcely known), reveals their goals and strategies, and provides well thought out predictions and prescriptions regarding domestic issues and foreign relations.

In particular, the last chapter “The Path to Reform” dissects the approach of the Cuban government headed by Raul Castro.

Lopez-Levy explains that “Since Raul wants not a transition to democracy, but economic reform managed by the PCC [Communist Party of Cuba], the adopted political sequence is logical: first, to strengthen the party; second, to prepare the people for the adjustments and collateral dislocations, such as an increase in inequality and corruption; and third, to implement the economic changes.”

He goes on to warn, “Nobody should expect the outright abandonment of socialism or a repudiation of Fidel’s legacy. On the contrary, even if the model is radically changed, the rhetoric will still be one of continuity and reverence for the previous stages.”

Lopez-Levy’s expertise on the matter is no accident. His uncle and Raul Castro are long-time pals and their families are bound by marital ties.

This positioning facilitated Lopez-Levy’s academic and military training, which, with Raul’s intervention, led to a short-lived career as a political analyst for the Cuban government that was terminated due to his inability to tow the party line.

For more than a decade now, he has been studying and teaching in the US, currently at the Josef Korbel School of International Studies at the University of Denver. Lopez-Levy provides a scholarly assessment of Cuba today and allows the reader to see it the situation through the eyes of a certain class of Cubans, a reformist segment of the ruling elite, which, until now, has been terribly absent from English language texts.

Cubaphiles must read this book even if just for the entertainment value of Lopez-Levy’s intimate encounters with the infamous, but subtle Raul Castro. Cubanologists will benefit greatly from the book’s thorough, knowledgeable and reasonable appraisal of where Cuba is today and where it is aiming to go in the near future. It will have you googling names, debating with yourself and others, and maybe even updating your expectations.
—–

One thought on “Raul Castro and the New Cuba”