HAVANA TIMES, Jan 14 — We had the opportunity and pleasure to interview Miriela Moreno, the singer and director of the popular Cuban musical group “Aceituna sin Hueso” (pitted olives). As she stated, “My home province of Villa Clara embraces me and is an inspiration, a lantern and a place that gives me a sense of permanency.”

HT:  How would you define your group “Aceituna sin Hueso”?

HT:  When we listen to your music, we find certain influences that go beyond Cuban music.

MM: Yes, part of Cuban music mixes with different international forms of folkloric music, though the public knows more about our work with Spanish and flamenco sounds, given the air play these receive. In this sense, Aceituna flirts a lot with world music from the Caribbean and India, as well as Celtic music, jazz, rock, rap, music of the highlands, funk, country and western, soul, pop, Arabic, Turkish, and finally a wide range that allows us to merge our roots without the fear of repeating ourselves too much.

HT: Do you have any family roots that explain the foreign influences we see in your work.

MM: Well I have to say that I do. My four grandparents inherited the Spanish component since they were all descendants and even originally from Spain. That’s why that music has always captivated me with an indescribable passion, though it never occurred to me to think about it as stemming from the power of genetics.

HT: When did the group emerge and what were its ideas?

MM: It was formed on February 19, 2000, in my home province of Villa Clara. I had been working there since 1998 in the Santa Clara musical group of the Spanish ballet, directed by Leonardo Orozco. Later we formed the group “Matrimonio del aire,” which was a sort of flamenco-fusion effort under the direction of Reydel Bernal.

I had already been seduced by the idea of saying things in a different way but with Cuban music as the core of my approach. It was then that we came up with “El cantaor y el Molino,” which was the first song that we included in the repertoire that defined our later work as the group “Aceituna sin hueso.” 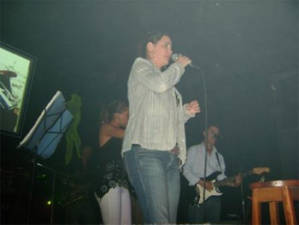 HT: Other than music, what occupied the professional time of Moreno Miriela?

MM: At that time I worked as an artisan and I was in the group of “Teatro 2,” which was led by Fernando Saez in Santa Clara. That was until I formed my own project, “Aceituna sin hueso.”

HT: What musical training do you have?
MM: By geographic fatalism I was born in a sugar mill town in Villa Clara Province called Bartholomew, where they didn’t do a lot of recruitment for the schools of art. In any case, I lived there until 5th grade. That’s when I finally moved to Remedios (my hometown). I devoted myself to sports and I followed that vocation for a long time, which is why my opportunities for studying music were cut short.

In 2000 I started at the Escuela de Superacion Profesional (School for Professional Development). In my fourth semester I left to go live in Havana after the success of our album: “Marginales.com” which left me no time for studies. So far I’ve found mechanisms for composing and arranging my music… 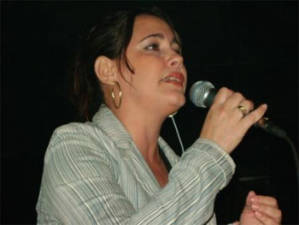 MM: In 2002, the CD Marginales.com was produced under the Unicorn label of the Abdala Studios. In 2005 with the same label we made Consumir preferiblemente antes de, and also that year we participated in the production Cuba le canta a Serrat, which was nominated for a Grammy. On it, we performed songs with a host of Cuban musical geniuses under the Spanish label Discmedi-blau.

Interchangeably, I’ve participated as a guest vocalist on several albums, such as Iluminame by Liuba Maria Hevia under the Unicorn label; Muy exclusive, a duet with Israel Rojas on Egrem records; Homenaje a Celina Gonzalez, on the Bismusic label; Ellas cantan bolero, ellos cantan bolero, currently in production with Egrem; Un concierto en vivo with the Jazz band “Alba Tropic Jazz Orchestra,” which is a symbiosis of Cuban and Italian musicians. Our third album is now in production with Bismusic records.

HT: What has the province of Villa Clara represented to your artistic development?

MM: My home province of Villa Clara embraces me and is an inspiration, a guiding light and a place that gives me a sense of permanency… 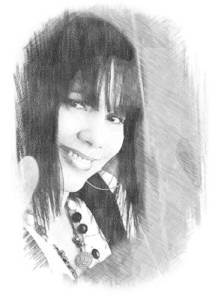 MM: Most are mid-level graduates, others enrolled at the Superior Institute of Music (ISA) and three others — like me — have no formal training but have track records of professionalism. In all, there are 10 of us working as musicians, because I expanded the format.

HT: Have you had experiences off the island?

MM: In 2007 we were in Spain where we performed in four important theaters in Madrid. Also, in 2010, I had to travel alone to attend a series of lectures on flamenco as it is created in Spain. Both were unforgettable experiences.

HT: How do you see the development of young musicians in Cuba currently?

MM: Cuba is and will be a musical powerhouse that astounds and perpetuates the genius of many artists who have made and continue making history. The economic conditions are a lifeline for those of us who live from the arts, but that does not at all define the creative genius of those with talent who know how to carry art beyond people and their shortages.

What cannot be separated from an artist are the emotions that engender so much, and so much of the eternal in whatever way that music is made. Cuba is very good in this regard and I’m proud to be what I am in my country. This, with its affections, provides us with everything we need to make history.

HT: What’s next for the career of Miriela Moreno’s and “Aceituna sin Hueso”?

MM: Renewal, polishing, filling ourselves with all that we love and everything that defines us, and of course our public.