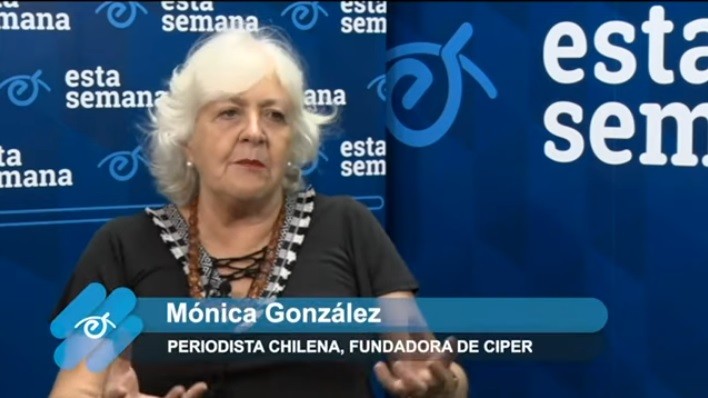 Following Chile’s social explosion, the country will hold a plebiscite in which “democracy is at stake,” affirms the Chilean journalist Monica Gonzalez.

HAVANA TIMES – Chilean journalist Monica Gonzalez, founder and former director of Chile’s Center for Investigation and Journalistic Information (CIPER), and a member of the Directive Council of the Gabo Foundation, visited Nicaragua as part of the international jury for awarding the national “’Pedro Joaquin Chamorro’ Excellence in Journalism Award”, under the auspices of the Violeta Barrios de Chamorro Foundation.

The jury, which also included Juan Carlos Calderon of Ecuador and Ana Maria Saavedra of Colombia, analyzed a sampling of the national journalism that is practiced despite the regime’s repression. Monica Gonzalez highlighted the national reporting as “valiant, rigorous and human,” but above all emphasized that she felt “great respect for the [regime’s] victims.”

During an interview on the weekly internet news show Esta Semana we spoke of the conflictive relationship between journalism and power in Latin America, the social explosion that occurred in Chile in October 2019, and the plebiscite to be held on April 26 of this year, to change the Constitution that was inherited from the dictatorship of Augusto Pinochet.  In this plebiscite, Monica Gonzalez asserts: “Democracy is at stake.”

As part of an international jury, you had the opportunity to evaluate a sampling of Nicaraguan journalism. What’s your opinion of the journalism being done today under the Ortega regime?

Monica Gonzalez: It’s a privilege to study it, because it’s a great wide-angle lens which embraces a great variety of topics. Being part of a jury forces you to read carefully those pieces on the repression and the hard life that Nicaraguans are living. A police state in which violence has been normalized. What impacted me most is that it’s excellent, valiant, rigorous and human, with great respect for the victims. I believe that they have a great road to walk and I hope that it will be short, because it has to do with the recovering of freedom.  But the contribution that good independent journalism is making so that Nicaragua can recover its freedom is enormous.

Nicaragua has been experiencing a very intense crisis in the last 22 months. The process in other countries such as Venezuela has taken a very long time. Last October, a social explosion erupted in your own country.  Given each one of these phenomena, how is journalism telling the story?

Monica Gonzalez: Carlos Fernando, you and I came from another generation, and we know that today journalism plays a much more important role than it did yesterday. First, because there’s a fake news industry; secondly, because there an industry that works to defend wealth, where they unite and join hands, and where some of our colleagues, lawyers, very important people work. People that devote themselves to lying in order to create fear, so that the citizens distrust the politicians. They play the game of those involved in enormous corruption. So, real journalism has a decisive role, to maintain credibility and tell the truth.

Can you tell the truth and maintain credibility in the face of a situation of extreme political polarization like the one we’re living through?

Monica Gonzalez: Yes, by being rigorous. Not covering up for anyone, not holding back, not protecting any sector of the corruption which is the genesis of violence. Let’s call things by their names; the genesis of the violence in Chile is the genesis of the violence in Venezuela or Nicaragua, or that which you can experience in the United States. There are economic interests.  It’s the corruption and the ambition of some of the economic groups to have more power, more money.

In Chile, inequality has reached terrible levels. I believe that there’s one thing certain people forget: people’s dignity has a limit. In Chile there wasn’t a dictatorship [referring to recent decades], but the inequality was brutal. Also, the justice system is totally uneven. For the criminals that raise the prices of medications and kill people that way, the punishment is to attend ethics classes. You steal a hen and they give you five years and a day in jail.

I’ll give you just one example: the punishment for women, the miserable pensions, while those who administer the prevention funds are the ones who earn the most in Chile and have the greatest accumulated capital of the whole country, almost equal to the GNP of Chile.

From outside, there’s a perception that following the Pinochet dictatorship [1973-1990] and the transition process, Chile became an economically stable country with solid democratic institutions. What produced the social explosion?

Monica Gonzalez: Corruption rots even the soul of a country. We can’t ignore that. Imagine, if corruption had never existed – we’d already be a developed country. If we created an Excel spreadsheet of the Odebrecht company’s corruption across ten Latin American countries; then there’s the corruption in Mexico, where today we know that the Police chief of the president who declared war against drug trafficking was the main ally of the Sinaloa Cartel. We know that the brother of Honduras’ president is at the point of being found guilty via evidence that indicates that the Mexican drug cartels, Chapo Guzman, were financing the campaign of the current president of Honduras. What’s happening is terrible. Four presidents of Peru, plus Keiko Fujimori, one of the defeated candidates, are in jail or under house arrest. Corruption has rotted everything – the weak institutions and right up to our souls.

In Nicaragua, the institutions completely collapsed under a system of centralization under a family dynasty, that has also become a bloody dictatorship.

Monica Gonzalez: So, no one controls the corruption.

Yes, but in Chile, did the institutions respond or not to that clamor, that demand from the people when there were denunciations of corruption?

Monica Gonzalez: We’re trying to get them to respond. However, what happens is that the police are totally corrupt. They fabricated evidence to unjustly jail the Mapuche, to imprison them and kill them. So, today you have a [police] chief that no one believes. The narcos have penetrated the police, and we have a police force that isn’t any good, that doesn’t respond. The president doesn’t want to change it, and what that police have done is to systematically violate human rights.

How many deaths were there during the protests in Chile?

Monica Gonzalez: Since October 18th we know that there are over thirty. We have more than 300 people with ocular injuries, because what they do is to shoot [rubber bullets] at the head at close range to affect the eyes.

Have the perpetrators of the violence, the rifle bearers and others been investigated?

In Chile there was an effort to reconstruct truth and memory, and some penal court processes were opened a long time later against the perpetrators of the violence. How long was justice delayed? In Nicaragua, no member of the police or paramilitary has been even detained or investigated.

Monica Gonzalez: That indicates that Daniel Ortega is copying the methods of someone he fought against, Somoza. That doesn’t only make me want to vomit, it profanes the memory of all the people who fought with such zeal for freedom in Latin America. If in Chile we’re incapable of obtaining justice – without delaying it as it was delayed before, for 30 or 40 years, then I insist once again: it means that democracy has been violated and that there’s no rule of law.

Today’s trial processes are very rapid. It’s not like before, when they were incubated and tardy. The machines of death are unleashed rapidly, and we don’t have coup d’etats like the ones of yesteryear, with tanks and soldiers in the streets with their faces painted black. We have police, these groups of riot squads that go about the streets trying to inspire fear and what they do is inspire ridicule. In Chile, the militarized police do this.

In Chile, as a result of this crisis, a process of dialogue took place.  A plebiscite has been called for April 26th. What’s at stake in this plebiscite?

Monica Gonzalez: Democracy. As simple as that, because there are some sectors that don’t want there to be a plebiscite. It scares them. The democracy we have came down from Pinochet. Small reforms have been made, patches, but it’s a constitution that doesn’t correspond to a democracy.

Is the plebiscite to change the constitution?

Monica Gonzalez: It’s to decide if they want to change it, or if we maintain it.  It’s clear that there’s a majority who want to change it. The elite, the landowners, the owners of the large properties and wealth are afraid of it being changed because they enjoy many privileges under this constitution which is based on the right to property. That seems to me, at the heights of the twenty-first century, unacceptable.

The right to life is the principal right that the constitution should guarantee and not the right to property. In Chile, they can repeat the script: assassinations, terror, and create fear so that there won’t be a plebiscite. For that reason, I say that democracy’s at stake, and it’s not an ideological struggle. We’re living in times of great revolutions, but not the revolutions we were familiar with before. They’re not of the left and right. They’re struggles that pit the sectors that appropriate power against the great mass of citizens.

Who is the symbol of the change in Chile, the demand for a new constitution, for more equality?

Monica Gonzalez: I say this with great pain and sorrow: no one can wave the flag of any party, because, unfortunately, corruption has poisoned the entire system. Parliamentarians, social leaders, leaders of the NGOs, union members, it has poisoned them all. That’s the great drama. They illegally finance politics; they obtain great benefits, like a law for fishing and the environment cut to their measure, a mining law cut to their measure. And no one goes to jail.

You’re making a blanket condemnation of the political class…

Monica Gonzalez: It’s not me, everyone says this. No one can unfurl a single political flag in a demonstration. I say it with sorrow, because we know that democracy moves through politics.

Who’s behind those massive mobilizations in Chile?

Monica Gonzalez: The people. The people who come from all corners, all sectors of the population: the old and the young together. Old people who are dying with their miserable pensions.

Does this offer a hope for change, or does the political class wield control?

Monica Gonzalez: They try to have control. They still have it, but if the changes aren’t made, the attitudes changed, if they don’t break open the bubble they live in while the great masses of people live in miserable slums, without green spaces and with difficulties in transportation, they’re going to throw it away completely.

Chilean journalism was also surprised by this social explosion. Where is the Chilean press in this process?

Monica Gonzalez: Like in your country. There’s part of the press that walks in step with those who have power – because they fear them, or because they pay them very well. That has to be said. And there’s another independent journalism that’s very precarious, that earns a lot less and that tries to investigate and tell the truth. What does it mean to tell the truth? It’s not counting the numbers of poor, but relating how they live: with humiliation, the lack of dignity. And the lack of dignity is something that you should never forget. If there’s something that they can never strip away from you, it’s your dignity. This has as much value as life itself, and at times we journalists forget this too.