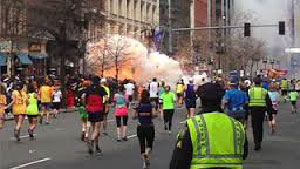 HAVANA TIMES – The toll from Monday’s bombing of the Boston Marathon stands at three dead and at least 144 wounded, 17 critically. The two blasts occurred within a 13-second span and just 100 yards apart near the finish line at the historic race. Doctors have reportedly carried out at least 10 amputations on bombing victims, with many patients suffering shrapnel wounds either from the bombs directly or from the resulting debris. It was the worst bombing in the United States since the Oklahoma City attack of 1995. No arrests have been made, and no one has claimed responsibility.

AARON MATÉ: The toll from Monday’s bombing of the Boston Marathon stands at three dead and 144 wounded, 17 critically. It was the worst bombing in the U.S. since the Oklahoma City attack of 1995.

Monday’s victims include a number of children. An eight-year-old boy named Martin Richard was killed. He was in the city to watch his father run the marathon. Martin’s six-year-old sister reportedly lost a leg in the attack. And their mother underwent surgery for a brain injury last night.

The bombings took place at 2:50 p.m. local time, with two blasts about a hundred yards apart in the heart of downtown. The first bomb exploded inside a garbage can near a group of spectators watching runners approach the finish line.

This is video taken at the scene of the first bombing right when it happened. You can hear the second bomb go off about 13 seconds later.

Doctors have reportedly carried out at least 10 amputations on bombing victims. A trauma surgeon at Massachusetts General Hospital said many patients suffered shrapnel wounds, either from the bombs directly or from the resulting debris.

DR. PETER FAGENHOLZ: There is a lot of small metal debris. Some people have asked already about whether these were BBs or they were parts of bombs, and I just don’t think we’re able to say whether these are small bits of metal that were placed there intentionally or whether they were just part of the environment that were involved in the blast.

AMY GOODMAN: No group has claimed responsibility for the bombings. Both Fox News and the New York Post reported authorities are guarding a person of interest who suffered severe burns. The person was described as a Saudi national on a student visa who’s being treated for his wounds at a local hospital. But with no other details to emerge, he may just be a victim of the bombing. At a news conference, Boston Police Commissioner Ed Davis maintained there are no suspects so far.

AMY GOODMAN: Most of the Boston Marathon’s 23,000 runners had finished the race when the bombings hit, but the streets were still packed with runners making their way to the finish line and the many more spectators cheering them on. Over half a million people turn out for the Boston Marathon each year. It’s the oldest marathon in the country and one of the most famous in the world. It’s held annually in Boston on Patriots’ Day, the Massachusetts holiday commemorating the start of the American Revolution.

With no suspects and almost no information to go on so far, trying to determine responsibility is only a matter of speculation. Among the potential factors of note is that in addition to Patriots’ Day, Monday also marked Tax Day, the federal deadline for filing taxes. That’s fueled speculation the bombing could have been the work of anti-government extremists.

Speaking at the White House, President Obama cautioned against a rush to judgment and vowed to bring the perpetrators to justice.

PRESIDENT BARACK OBAMA: We still do not know who did this or why. And people shouldn’t jump to conclusions before we have all the facts. But make no mistake: We will get to the bottom of this. And we will find out who did this. We’ll find out why they did this. Any responsible individuals, any responsible groups will feel the full weight of justice.

AMY GOODMAN: Witnesses of the bombings describe gruesome injuries and a sea of blood. The first witness here is Carlos Arredondo, who has appeared a number of times on Democracy Now! He became a prominent antiwar activist after his son was killed in Iraq in 2004 driving around the country in his son’s pickup truck.

CARLOS ARREDONDO: The bomb went off right in front of me right there. And my first instinct was to go try to help them. And I remember pick up a fellow who lost both of the limbs, and everybody around him was missing limbs, too, in a big puddle of blood. And a young lady was sort of begging for help. An horrified, horrified scene there.

FIRST RESPONDER: It seemed like most people’s lower extremities, and there were some bad-looking people. And, you know, I’m praying for all of them. I—you know, we were all trying to put pressure on all the wounds for everybody, tourniquets and whatever we could do. And it was chaos.