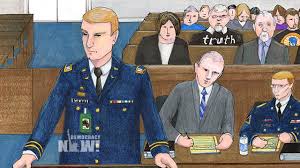 HAVANA TIMES – The judge in the Bradley Manning case says she will decide Thursday on his lawyers’ request to dismiss seven of the charges he faces, including allegations that he aided the enemy when he provided hundreds of thousands of classified documents to WikiLeaks.

The defense says the prosecution has not provided sufficient evidence that Manning had actual knowledge that the information he leaked would end up with the enemy. Lawyers for the government have said that, based on his training, Private Manning knew that al-Qaeda and other groups could have access to the documents.

For an inside look of the Manning trial, we speak to Kevin Gosztola, a civil liberties blogger at Firedoglake who is one of only a handful of journalists covering the Manning trial on a daily basis. “It really is only being covered when the outlets in the U.S. media feel they have an obligation to cover something,” Gosztola says.

AARON MATÉ: We end today’s show with an update on the trial of Private Bradley Manning at Fort Meade. The judge hearing the case said she will decide Thursday on his lawyers’ request to dismiss seven of the charges he faces, including allegations he aided the enemy when he provided hundreds of thousands of classified documents to WikiLeaks. The defense says the prosecution has not provided sufficient evidence that Manning had “actual knowledge” the information would end up with the enemy. Lawyers for the government have said that, based on his training, Private Manning knew al-Qaeda and other groups could have access to the documents.

AMY GOODMAN: Well, last week we spoke with—about the trial with Kevin Gosztola, civil liberties blogger at Firedoglake, who has been covering Manning’s trial at Fort Meade in Maryland every day. He’s the co-author of Truth and Consequences: The U.S. vs. Bradley Manning. He joined us via Democracy Now! video stream from his car in the Fort Meade parking lot. I interviewed him along with co-host Nermeen Shaikh and began by asking him about how the trial has been covered by the media.

KEVIN GOSZTOLA: It really is only being covered when the outlets in the U.S. media feel they have an obligation to cover something. So, for example, this is the first day of the trial—that’s something important; this is the first day of Bradley Manning’s defense—that’s feels like something important. Other than that, we aren’t going to see a lot of outlets. We’ve seen a small, dedicated, core group of individuals, of which I have been a part, an independent journalist named Alexa O’Brien, Courthouse News reporter who works in New York City named Adam Klasfeld. We’ve had a courtroom sketch artist named Clark Stoeckley, who also happens to be the driver of the WikiLeaks Truck, which, I have to tell you, it is quite remarkable and phenomenal to watch that drive onto the base every single day. And then we have Nathan Fuller, who is a reporter for the Bradley Manning Support Network. And these are the people who have been showing up every single day, and many of us don’t even live in D.C. It baffles me that in a city of Washington, D.C., where I assume there are thousands of journalists, there aren’t more reporters who feel like they should be here regularly. But we’ve had Associated Press here regularly. They have been doing good work as an establishment news organization. Occasionally we see The Washington Post, The Guardian. The New York Times shows up from time to time because they were shamed by their public editor, Margaret Sullivan. We just don’t have the sort of wall-to-wall coverage that the George Zimmerman trial has or some of these other more sensational trials.

NERMEEN SHAIKH: Kevin Gosztola, could you explain what the significance is of the way in which WikiLeaks is being characterized in the trial—that is, that Manning leaked these documents to the website WikiLeaks and not to a mainstream media outlet like The New York Times?

KEVIN GOSZTOLA: There’s an Army intelligence report that Manning is accused of leaking from the Army Counterintelligence Center. It suggested that WikiLeaks might pose a threat to the U.S. military. That wasn’t a question that was answered by the report. They were able to find fact that the enemy in fact would use WikiLeaks to go find U.S. government information. But in that report, it describes WikiLeaks as an organization that is intent on basically stealing proprietary data of the United States government or even corporations, and doing this because they feel they have a commitment or desire to expose wrongdoing of governments. So they see Manning as working on behalf of this organization.

And today, after we are done with this interview, Professor Yochai Benkler is going to take the stand for the defense, and he is being put on the stand to talk about what is WikiLeaks. It’s very important in this case that the defense gets out that WikiLeaks is a media organization, that when Bradley Manning engaged in his act, which I consider classic whistleblowing, based on his statement on February 28th, that WikiLeaks is in fact a media organization and not some sort of organization that would have been possibly working and doing so for the benefit of foreign intelligence services or adversaries like terrorist organizations.

AMY GOODMAN: Well, I mean, the fact is that WikiLeaks collaborated with The New York Times, The Guardian of Britain, the El País of Spain, Der Spiegel in Germany, and many other very mainstream news organizations in releasing these documents. Now, Kevin, just that picture you described of the court artist is the one driving the WikiLeaks Truck?

KEVIN GOSZTOLA: That’s correct. In fact, there’s a story. He was stopped on base in the visitors’ parking lot on Monday, and in fact a police officer approached him and said, “We have a report that you’re disseminating top-secret information on Fort Meade base.” And they went over his car, and they even asked to search it, but he said, “You have to get a warrant to do that.” He’s a very fun individual to have in the press pool with us, Clark Stoeckley, and he’s done some very amazing sketches. You can see them in every single post that I do on the court-martial.

NERMEEN SHAIKH: Kevin Gosztola, what’s the significance of this being a court-martial, that is, a military trial, rather than a trial in a civilian court? How is that being played out, both for the prosecution and, in particular, of course, for the defense?

KEVIN GOSZTOLA: I think that the difference is getting blurred, because we have the national security state really taking over a lot of the legal processes in the United States. But what I fundamentally see is that Coombs has an uphill battle as Manning’s defense lawyer and that he is arguing against the government, which is making a case to a judge that is basically appointed by the government to oversee this case. So there’s a culture to this whole process that he has to overcome that I think is nearly impossible, which really increases the possibility that Manning is going to get some kind of a harsh sentence and, in fact, get convicted of some of these charges that, to an outside observer, to a regular reporter who’s been following this process for, you know, about two years now, that it looks like there’s no evidence for any of these charges, and yet one can also see the judge hedging and deciding that she’s going to split the difference and give Manning some kind of a sentence where he wouldn’t get out of jail until he was 50 or 60 years old.

AMY GOODMAN: Then, what you were most surprised by in the prosecution’s case against Bradley Manning?

KEVIN GOSZTOLA: Well, what’s been so surprising is that they don’t have a lot of evidence. They have mostly circumstantial evidence. They can prove what Manning confessed to, that he willfully communicated this information to persons that were unauthorized to receive it, which, in a sense, is a violation of the Espionage Act, although I will say that there are other ways to prosecute and go after individuals who violate this act. You don’t have to treat them as spies, as our government is doing and how the Obama administration has gone after a record number of individuals. But there’s all of these different instances of passing on information. And they want to say he exceeded authorized access on his computer, when he didn’t do any hacking. They want to say that he stole the information, when he had regular access to the material and it was fully within his privileges as a intelligence analyst to have the information on his computer. And so, that is why, as we’re seeing in this court-martial right now, the defense is pushing to get dismissed or to get a finding of not guilty on about half of the charges.

AMY GOODMAN: Kevin Gosztola, civil liberties blogger at Firedoglake. He’s been covering Bradley Manning’s trial at Fort Meade, Maryland, every day since it’s begun. Kevin is the co-author of Truth and Consequences: The U.S. vs. Bradley Manning. The judge hearing the case against Private Bradley Manning at Fort Meade said she would decide Thursday on Manning’s lawyers’ request to dismiss seven of the charges, including allegations that he aided the enemy when he provided hundreds of thousands of classified documents to WikiLeaks.

You can go to democracynow.org to visit all our past coverage on Bradley Manning and WikiLeaks. Also go there to see our extended interviews with Glenn Greenwald, with Michael Ratner, the attorney for Julian Assange and WikiLeaks, and others. That’s democracynow.org. You can also visit our Facebook page and tweet about us. Let your friends know about this independent, daily, unembedded, investigative international news hour.