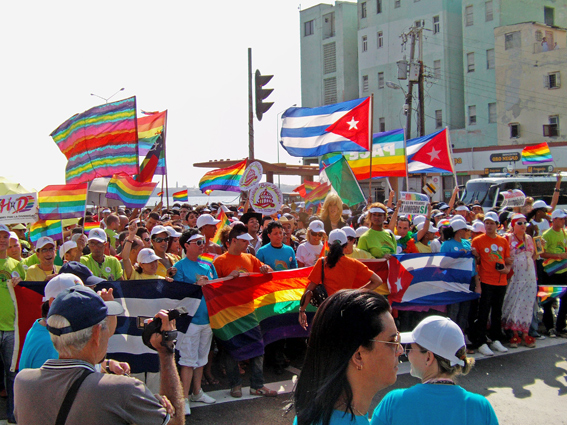 On Saturday, May 14, activities of the Fourth Cuban “Campaign against Homophobia” were held at the Pavilion Cuba exhibition center in Havana.  As I wrote in my last diary entry, this year I’ve hardly been able to participate in the varied actions of this week, but I couldn’t miss the parade.

The program began with a multicolored conga line that formed right on 23rd Street.  In the accompanying photos one can note the cheerful and fiesta-like atmosphere enjoyed by all.  Everything was similar to the “Gay Pride” parades that we’ve seen in photos on the Internet.  Of course in this case it was an excessively organized conga line.

When arriving at the corner of 23rd and Malecon, the parade’s starting point, a group from the sponsoring organization (the National Center for Sexual Education, CENESEX), clearly perturbed, yelled at Jimmy and me saying that we couldn’t walk in the street.

It was mandatory that we go up on the sidewalk.  By their tone, it seemed that this had been a question of life or death.

However — as iconoclasts as ever — we continued walking in the street until the end of the march, in defiance of the loudly received order.  After all, we had come to a conga. 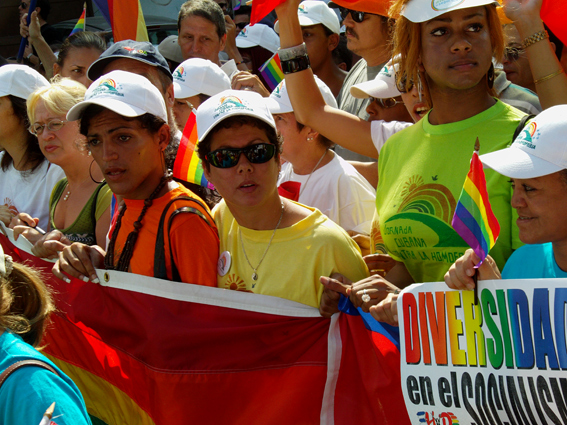 It’s exactly that “organizational spirit” that has been one of the worst things that happens in Cuban carnival processions, giving those “marches” and any other public gathering a distinctly political feeling.

Once the signal was given, the whole group began going up the street, walking on the right hand side.  When the drums of the Federation of University Students procession began to sound, the conga formed.  Fortunately, the true happiness of the people spoiled the “organizational spirit” that the functionaries were counting on.

We joined in and at once we meet with friends, especially LGBT activists.  I marched and danced all the way to Pavilion Cuba with Yasmin Portals and Rogelio Diaz.  I was also able to greet my friends in the group “Men for Diversity” (HxD), which is associated with CENESEX.

As the activity began, the journalist and LGBT activist Francisco Rodriguez Cruz (Paquito el de Cuba) told me his impressions:

“Here we have stellar people here, as always.  Though I was in front of the conga line, I had the perception that there were plenty of people here.  Last year I went to the exit of the Yara Cinema, where there was also a large group of people.  But this time it formed earlier, and those who came here were exclusively interested in participating in the conga.  That’s to say there was the apparent intention of being here, and I find that this too is important.” 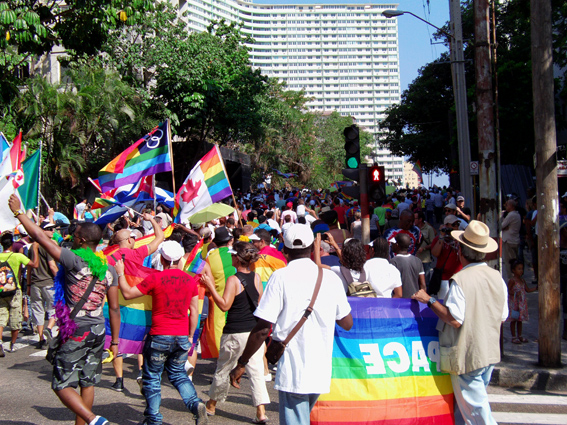 In addition to the conga, what impressed me greatly were the words by the Martin Luther King Jr.  Memorial Center (CMMLK).  “This week has to help us to form this community that we are,” said one of the center’s organizers as he invited the public to come up on the dais.  CMMLK is a Christian organization directed by Reverend Raul Suarez.

This sea of people was arguably a good place to watch models themselves parading around semi-nude along an improvised gangplank.  A certain euphoria could be felt, especially in the faces of homosexual men when seeing beautiful masculine models sashaying around.

The Fourth Campaign against Homophobia is continuing.  It has been good that every year it poses new challenges and that its demands have been able to combine critical thought with pleasure and amusement.

Those demands of the Cuban LGBT community continue to acquire a visible face as we have been able to find a setting for the re-launching of a movement.  Congratulations and thanks to the organizers, sponsors and participants.