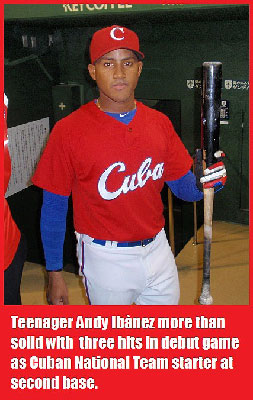 It was a far different atmosphere this time around than two years back when the Roger Machado-managed Cuba B squad was upended by a similar pesky Curacao outfit during a rain and wind-plagued 2011 World Port Tournament opener.

About the only similarity was the presence on the mound of veteran 34-year-old Curacao starter Raydell Isbella who also kept Cuban hitters off balance in the 2011 inaugural match. Isbella was again relatively effective in holding Cuban sluggers at bay throughout most of today’s complete-game effort; but in the end Isabella was no match for the white-washing mound work of Ismel Jiménez.

The stellar prospect opened with a bang, singling sharply in his first at bat, moving to third on a well-excited hit-and-run base knock to right field off the bat of Gourriel, and then boldly scampering home with the game’s opening tally after Curacao right fielder Christefer Obispo delayed his home-plate-bound throw after snagging Jose Dariel Abreu’s fly ball into short right field.

The opportune run held up as the game’s only tally until Cuba’s second small uprising in the home half of the sixth frame.

Yulieski Gourriel shared the offensive heroics with a resounding triple to deepest right center plating Ibáñez for a second time in the game-turning sixth frame. Gourriel himself accounted for the final insurance tally when he also scampered home on Abreu’s run-producing chopper to shortstop.

The trio of base knocks by Ibánez and the added pair by Gourriel provided nearly all the Cuban offense on the day; the only remaining hits were a third-inning slap single by Guillermo Heredia (who was immediately thrown out stealing) and a two-out seventh-inning infield bunt single by left fielder Stayler Hernández.

Tomás (three fly outs), Peraza (two soft flies and a strikeout) and Abreu (a sacrifice fly and three infield rollers) were all silenced in the middle of the hefty Cuban lineup, although Abreu did get credit for knocking home two of the Cuban runs.

Ismel never wavered on the hill although he did scatter seven ultimately harmless one-base hits, several of the blooper variety. Effectively mixing an assortment of breaking balls and tantalizing speed changes, Jiménez struck out ten (at least one every frame until the eighth) and never allowed a runner past second base.

There was a single brief scare for the Cuban bench in the top of the sixth when Jiménez slipped on the rubber delivering the first pitch to leadoff batter Johannes Gregorious and appeared to have injured his left ankle. It turned out to be a small flesh abrasion inflicted by his own spikes and Ismel was able to continue without problem.

Loss of Jiménez would not only have eliminated the Cuban ace with two likely starts remaining but also would have cut the number of now available Cuban arms to a mere half-dozen (after the unexpected departure of Odrisamer Despaigne during transit to Rotterdam). Raciel Iglesias effectively closed out the game in the top of the ninth, allowing a harmless scratch single in between inning-opening and closing strikeouts.

The only other minor negative for the Cuban forces was some occasionally shaky outfield play by Yasmani Tomás who struggled with a number of drives sliced in his direction. Tomás got very late jumps on a pair of seemingly catchable balls off the bats of Shurendell Mujica and Quincy Ascención that dropped at his feet for singles, but recovered nicely on the first occasion (in the second frame) to gun down Mujica who tried to stretch the blooper into a leadoff double.

Yasmani also lost a foul fly in the sun deep in the right field corner a few innings later. Tomás regularly plays center field with Industriales back home and appeared to be having difficulty in reading movements of the ball off the bat out in the strange right field surroundings.

The second game of the day was a tight see-saw struggle which saw Chinese Taipei grab an early advantage at 2-0 only to fall behind after a 3-run fourth uprising by the host Dutch. Starters Jung Hao Hsieh and Diegomar Markwell both worked out of a number early-inning minor jams to survive into the middle innings.

Hsieh gave way first in the home fifth (replaced by southpaw Sheng Hsiung Huang) and was later replaced by Kuo Yu Lin as Holland opened a comfortable 5-2 margin in the home sixth. The final count was 7-2 with Markwell picking up the victory for the home forces.

Monday’s action will provide the first highly anticipated showdown between Yovani Aragón’s Cuban forces and the Dutch club which has seemed to have Cuba’s number in recent crucial international face-offs. The Dutch are admittedly without the heart of their WBC squad of a few months back yet still boast a number of veteran pitchers who have given Cuban bats plenty of fits over the years – especially lefty Diegomar Markwell and right-handers Leon Boyd, Orlando Yntema, and Rob Cordemans.

Orange manager Steven Janssen decided to use Markwell in the Sunday opener and not save him for the Cubans with the rather obvious intention of having him available for three starts, including a potential championship finale next Sunday; it was this same strategy that legislated the use of Ismel Jiménez in the lid-lifter versus Curacao.

Cuba most likely will truck out southpaw Wilber Pérez for the first meeting with the Orange although Vladimir Baños and Noelvis Entenza remain strong options. Janssen might be expected to counter with either Yntema or Cordemans. Whatever the pitching choices, they game will be expected to showcase the strong Dutch mound corps against normally stronger Cuban slugging.

(*) Peter C. Bjarkman is author of A History of Cuban Baseball, 1864-2006 (McFarland, 2007) and is widely considered a leading authority on Cuban baseball, both past and present. He reports on Cuban League action and the Cuban national team for www.BaseballdeCuba.com and also writes a regular monthly Cuban League Report for www.ibaf.com. He is currently completing a book on the history of the post-revolution Cuban national team.