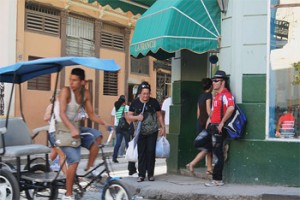 HAVANA TIMES, March 16 — Cuba is promoting itself as a tourist destination in the Caribbean at the World Tourism Exhibition, which is taking place in Paris at the Port de Versailles Exhibition Park, reports the Prensa Latina news agency.

The island is represented at a booth decked out with all the materials of the “Authentic Cuba” promotion campaign and is peddling such tourism entities as Havanatours, Cubanacan, Sol Melia, the French Office of Tourism, the Cuban company Turismo y Salud, the Iberostar chain and the magazine Bon Voyage a Cuba.

The expo, which will remain open through Sunday, involves nearly 500 exhibitors from 45 countries.

One thought on “Cuba Shows at Paris Tourism Fair”