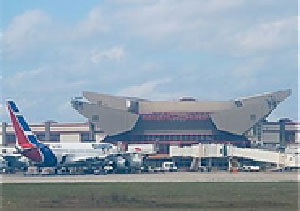 The report from the British agency, datelined São Paulo, says the credit would be issued by the Brazilian Development Bank, BNDS. The topic presumably was discussed during a recent visit to Brazil by Cuban Vice President Marino Murillo, the manager of the economic reforms undertaken by President Raúl Castro.

“The financing of the airports is under discussion,” and the topic “is subject to an evaluation by the bank’s technical staff,” the report says. Reuters says its unidentified source is linked to the administration of President Dilma Rouseff.

For its part, the Cuban daily newspaper Granma said that Murillo met “with Brazilian ministers and heads of state institutions dealing with agricultural and cattle farming, business, and scientific and technological development. According to Granma, Murillo also met with Foreign Minister Antonio Patriota and the Vice President of Brazil, Michel Temer.

The anonymity granted to the Brazilian informant may have resulted from the government’s stated decision to be discreet about its investments in various countries, Cuba among them, apparently because of malicious interpretations by some media.

The Cuban press has reported nothing on the possible cooperation to modernize the airports. Reuters points out that modern airports are an essential element of the tourism industry, one of Cuba’s main sources of income. Last year, Cuba welcomed 2.8 million foreign tourists, a record figure.

Although the Reuters report says that the work could begin in June and that Odebrecht already has a team selecting the suppliers of the materials needed to remodel Havana Airport, it also quotes an Odebrecht spokesman in São Paulo as saying that the company at this time does not have representatives in Cuba performing such tasks.

Reuters does not specify which of the Havana Airport terminals – the oldest one or the one built in the 1990s with Canadian aid – will be remodeled.

It is very true that the Cuban government is working hard to improve infrastructure. New highways are being built and existing roads are being maintained. Passenger and freight trains, engineering works that range from dams and viaducts through several provinces, and the ailing air fleet that provides national and foreign transportation are some of the projects selected to boost tourism and the domestic economy.

Reuters is right when it says that Brazil right now is one of Cuba’s principal commercial and financial allies. The BNDS underwrites as much as 80 percent of the exportation of engineering services and capital assets by those Brazilian companies that undertake works agreed upon by national governments. If the reports are confirmed, the cost of the works done in Cuban airports could amount to nearly $190 million.

One thought on “Cuba to Get More Brazilian Investment”