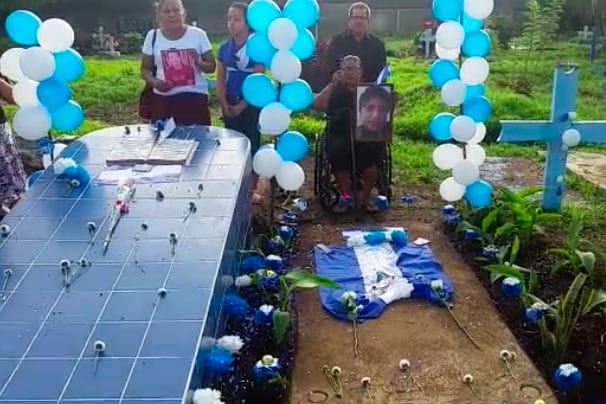 HAVANA TIMES – Relatives of Maycol Gonzalez, a protester killed on May 30, 2018, reported that they were harassed by Ortega government supporters when they visited his grave to put flowers in the Ticuantepe cemetery.

According to the story, almost at the end of the visit they sang the national anthem and did an express sit-in that unleashed the fury of the Sandinistas.

“When we left the cemetery they started insulting us and saying dirty words,” the complainants narrated. A Sandinista supporter even physically assaulted one of the relatives of the victims of the repression.

“One of the woman pounced on my daughter to hit her, but only managed to scratch her on the chest and forehead,” said the family member who preferred anonymity.

The Sandinista harassment was also joined by the besiegement of police officers. The Ortega supporters notified the Police about the express protest, and they immediately appeared with several patrols at the cemetery.

“The police officers saw the attack by the Sandinistas and they did nothing, rather they took pictures of us and wrote down the license number of the car in which we were moving,” the complainant says.

After that, they said that the Police circled around the houses of the victims accompanied by a government supporter who was guiding the officers.

This is not the first time that the Police and Ortega supporters besiege funerals or mourning expressions in cemeteries. The most recent and famous case was that of political prisoner Eddy Montes, whose wake and funeral were hounded by the Police.

Paulo Abrao, Executive Secretary of the Inter-American Commission on Human Rights (IACHR), criticized on that occasion that even the right to a funeral has been violated by the Ortega-Murillo regime.

In the case of Maycol’s relatives, there are a series of videos in which they documented the aggression and the police besiegement.