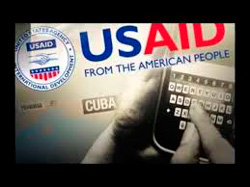 HAVANA TIMES – “U.S. secretly created ‘Cuban Twitter’ to stir unrest.” That is the name of an explosive new article by the Associated Press detailing how the U.S. Agency for International Development (USAID), created a fake Twitter program to undermine the Cuban government.

The communications network was called “ZunZuneo” — slang for a Cuban hummingbird’s tweet. It was reportedly built with secret shell companies financed through foreign banks.

According to AP, the United States planned to use the platform to spread political content that might trigger a Cuban Spring, or, as one USAID document put it, “renegotiate the balance of power between the state and society.”

We speak to Peter Kornbluh, director of the Cuba Documentation Project at the National Security Archive. He recently wrote an article in Foreign Policy called, “Our Man in Havana: Was USAID planning to overthrow Castro?”

AMY GOODMAN: “U.S. Secretly Created ‘Cuban Twitter’ to Stir Unrest.” That’s the name of an explosive new exposé by the Associated Press detailing how the U.S. government created a fake Twitter program to undermine the Cuban government. The communications network was called ZunZuneo, slang for a Cuban hummingbird’s tweet. It was reportedly built with secret shell companies financed through foreign banks. The program used cellphone text messaging to circumvent Cuba’s strict Internet restrictions. At its peak, it drew in more than 40,000 Cubans. However, its subscribers were completely unaware they were using a U.S. government program and giving American contractors their private data to potentially use for political purposes. Perhaps most shockingly, the Cuban Twitter program was not paid for and run by a spy agency such as the CIA. Instead, it was the brainchild of USAID, the U.S. Agency for International Development, best known for overseeing billions of dollars in U.S. humanitarian aid.

According to AP, documents show the U.S. government planned to build a subscriber base through “noncontroversial content”—news messages on soccer, on music, on hurricane updates. Later, when the network reached a critical mass of subscribers, operators would introduce political content aimed at inspiring Cubans to organize “smart mobs,” mass gatherings called at a moment’s notice that might trigger a Cuban Spring or, as one USAID document put it, “renegotiate the balance of power between the state and society.” By 2011, USAID was paying tens of thousands of dollars in text messaging fees to Cuba’s telecommunications monopoly routed through a secret bank account and front companies. Then, toward the middle of 2012, the program vanished as mysteriously as it appeared.

PRESS SECRETARY JAY CARNEY: Suggestions that this was a covert program are wrong. Congress funds democracy programming for Cuba to help empower Cubans to access more information and to strengthen civil society. These appropriations are public, unlike covert action. The money invested has been debated in Congress. In addition, GAO reviewed this program in detail in 2013 and found that it was conducted in accordance with U.S. law and under appropriate oversight controls.

Well, for more, we go to Madison, Wisconsin. We’re joined by Peter Kornbluh, who directs the Cuba Documentation Project at the National Security Archive, a public interest research center located at George Washington University. He’s the co-author of the forthcoming book, Back Channel to Cuba: The Hidden History of Negotiations Between Washington and Havana. He recently wrote an article in Foreign Policy called “Our Man in Havana: Was USAID Planning to Overthrow Castro?”

Peter Kornbluh, welcome back to Democracy Now! Well, why don’t you answer that question? Talk about this Twitter account and what you have been most surprised by.

PETER KORNBLUH: USAID is clearly in the job of trying to bring about regime change in Cuba. It financed a program sending private contractors into Cuba secretly several years ago to set up satellite communications networks. And now we’ve found out, through this extraordinary Associated Press story, that it was trying to set up a secret Twitter network that has all the elements of a classic covert operation. It has secret bank accounts, shell companies, multinational platforms in terms of various countries being used—Nicaragua, Spain, Ireland, London—and in the background a murky office in USAID called the Office of Transition Initiative, OTI, that clearly is, you know, competing with the Central Intelligence Agency for creative regime change programs in Cuba. It’s a stunning story. It’s an important story. And I’m glad we’re talking about it.

AMY GOODMAN: Explain how it was going to work, I mean, how the whole thing—the Associated Press exposé, how they were going to—how they had the Cuban cellphone numbers, they got a hold of them, and why this went to USAID in the end.

PETER KORNBLUH: Well, USAID has funding from the U.S. Congress. This funding is done under the title of a democracy program, democracy promotion program. And every year Congress is, you know, basically throwing $20 million into USAID’s lap and demanding that this money somehow get into Cuba to foster democracy. Now, if we had better relations with Cuba, if the United States’ goal wasn’t regime change in Cuba, then that money could be used for scholarships, educational—educational programs, humanitarian programs, training programs, but instead it’s being used for this kind of operation, apparently—covert operations intended first to network young Cubans.

And this is one of the elements of the story that’s particularly interesting. You know, the Twitter accounts, the text messaging is clearly the domain, in the United States, but all around the world, of younger people. And the youth population in Cuba is the most disenchanted with the revolution itself. It is clearly the demographic that the United States would want to mobilize.

You create a network—the idea was to create a network first in a very benign way, where all these Cubans would be talking to each other, and then, once the network was built, to start to pass these messages, without anybody knowing where they were coming from, that would have much more of a political content. And then—and this is very important—when unrest would eventually come to Cuba, have a communications vehicle in which the United States could pass messages, mobilize, organize opposition. And so, you know, the—

AMY GOODMAN: I want to play for you a comment of Democratic Senator Patrick Leahy of Vermont. He was on MSNBC yesterday and talked about the secret Cuba Twitter program.

SEN. PATRICK LEAHY: What they were trying to do here makes me think of people I somehow think are there still at the State Department and writing memos that they were writing back to President Eisenhower. You know, “If we just stay tough, those Castro brothers will be out of there any day now.” They’ve been saying that for 60 years. This—this made no sense at all. I was not briefed. I know of nobody who was briefed on this. I think most people would say, “Are you out of your mind?” This is not a program USAID should be involved with. And, you know, for one thing, it accomplished practically nothing.

AMY GOODMAN: That’s Democratic Senator Patrick Leahy of Vermont. Now, the U.S. government, we heard the spokesperson, Jay Carney, former reporter himself, for President Obama, saying this wasn’t secret. Yet AP gets these memos, like the one in 2010 from Mobile Accord, one of the project’s contractors: “There will be absolutely no mention of United States government involvement. This is absolutely crucial for the long-term success of the service and to ensure the success of the Mission.” Peter Kornbluh?

PETER KORNBLUH: Of course, it is secret. Jay Carney is misleading the American public. This is one of the saddest elements of this whole story, is the way the Obama administration has deceptively misrepresented these USAID programs. USAID, perhaps, is the new CIA here. And this all has a whiff of Iran-Contra kind of elements, in which, you may remember, Amy, you better than anybody, you know, back in the mid-1980s, when the CIA was banned from supporting the Contras in Central America by Congress and passed the operations to the National Security Council so that they could be conducted from there. And here we may have a situation where covert operations have simply been passed to USAID, where there isn’t very much scrutiny.

But it also begs a question: If this is what USAID is doing in Cuba, what has the CIA been doing there all this time? I think there’s quite a bit of programming and operations that we don’t know about directed towards Cuba that I think is really fundamental to be discussed and debated now, so we can change this archaic policy that Patrick Leahy referred to and get on with normalizing relations with Cuba, which, of course, is changing rapidly into a—from a communist society to a capitalist society. And we can help with that, but we can’t help with that by these silly, surreptitious and absolutely dangerous kind of covert operations.

AMY GOODMAN: Peter Kornbluh, you met with Alan Gross. He has been in prison in Cuba for, what, now I think he’s in his fourth year of prison. This is back in 2010, about the time that this program was starting, and he was arrested by the Cuban authorities for setting up a satellite communications network in Cuba as part of USAID’s Cuba Democracy and Contingency Planning Program. Is there a link?

PETER KORNBLUH: Yes. This is all part of a broader USAID effort to use the Internet, to use modern social media communication systems, to both network Cubans and then have an independent communications vehicle to Cubans on the island through which messages can be sent when unrest occurs, both to spur unrest and then to basically be able to communicate with leaders of the opposition to the Cuban government. And Alan Gross’s project was very similar, although it was—it had a different technological dynamic than the Twitter account, but it was the same idea: You create a network, you build a base of independent communications, and then later you can have people use those communications and receive communications from the United States in a way that gets around the controls of the Cuban government.

Alan Gross was arrested in December of 2009. I believe that this program probably was in the works, this Twitter program, all throughout 2009 also and may well have derived from the very end of the Bush administration. The Bush administration really wanted to help the Republican Party and help Jeb Bush in Florida, eventually, by pushing forward with covert operations and pro-democracy operations, and they started throwing even more money at USAID to do this. But one of the elements that we’ve learned here is that even after Alan Gross was arrested and Congress began to very forcefully scrutinize these types of surreptitious, certainly clearly covert operations being run out of USAID, USAID did not stop them. They continued and escalated this very Twitter-like program that we’re now learning about.

I think it’s very important, though, Amy, that we recognize one thing. Like the Alan Gross gambit, this Twitter operation failed miserably. It was a waste of money in the end, and now, with the revelations of it, are hurtful to the effort to kind of rebuild a U.S.-Cuban relationship, solve the problem of Alan Gross in prison in Cuba and the three Cuban spies that are still in prison in the United States, and get on with a relationship with Cuba that is a modern relationship that meets the national interests of the United States of America. And these regime change programs are only hurtful to those national interests.

AMY GOODMAN: Peter Kornbluh, I want to thank you for being with us, directs the Cuba Documentation Project, National Security Archive. We will link to the article you just wrote about this AP exposé.