The embassies refused to receive the statement

HAVANA TIMES – On Wednesday, December 19, groups of journalists and human rights defenders in Mexico, Argentina, Chile, Colombia and Costa Rica tried to deliver a statement to the Nicaraguan Embassies of their respective countries denouncing the harassment of media and journalists in the Central American country.

The statement is signed by 355 journalists, media, organizations and human rights defenders from 19 countries in Latin America and the rest of the world, and is addressed to the Government of Nicaragua, specifically to the presidency and vice-presidency of the republic, the Ministry of Interior and police and military commands.

In the document, the signatories demand the immediate cessation of harassment and attacks against media, journalists and human rights organizations in Nicaragua; the end of the illegal occupation of companies and civil society organizations and to guarantee the full observance of freedom of the press, expression and thought in the country.

However, no Nicaraguan Embassy in the aforementioned countries received the statement, alleging that there were no personnel in their diplomatic missions.

In Buenos Aires, a group of journalists visited the Embassy of Nicaragua in Argentina, (Av. Santa Fe 1845 7th A). They describe how it went: “A woman who said she was a service person refused to open the door and told us to wait for another person to arrive. We were in the corridor until minutes later two men arrived. They did not identify themselves, although one said he is the driver of the embassy. After explaining our intention to send the statement to the Nicaraguan Government, they said that neither the ambassador nor the consul were present and that they could not receive any document. They quickly entered the offices and we were left in the hallway. Then another woman arrived at the Embassy. The same approach was made to her and she also said that she could not accept any envelope and closed the door. We made one last attempt. We knocked on the door and the man who claimed to be the driver came out to repeat the information he had given us. He assured that the staff of the Embassy will be reincorporated into the offices in January, that he could not do anything because he was also Argentinian. We left the pronouncement in the mailbox and it was received by the concierge. ”

In Santiago, reporters from the Journalists Network of Chile, SembraMedia and Distintas Latitudes visited the Nicaraguan Embassy in Chile. “When we got there, they told us to go to the 11th floor, but when we were in the elevator, the concierge came and told us that only one person could go up. I went up (Paulette Desormeaux) and I was greeted by a woman to whom I delivered the letter, but when I asked her to stamp the acknowledgment that she had received the letter, she told me that she had to ask for authorization and left me waiting in the hall of the building with the door closed. She excused herself saying that she was alone in the Embassy, ??but then she talked with another person and after a few minutes she came out to tell me that she could not stamp it, because they were not attending the public, only consular matters. After insisting, the person said that the Embassy was closed until January and refused to give her name or her position. Nor did she give the name or position of the official in charge of authorizing the reception of the letter. Finally, she said that she would leave the letter at the reception of the building, where there are other offices, embassies and companies.”

In Mexico City, a group of 12 people, including advocates, journalists, photojournalists from Factual, Distintas Latitudes, Article 19, Desinformémonos, La Jornada, Periodistas Unidos and Fotorreporteros MX and independents, read the statement in front of the Nicaraguan Embassy in Mexico.

“While the reading was being conducted, seven police officers arrived who identified themselves as police officers of the Public Security Secretariat of Mexico City, assigned to the security of embassies in the city. They remained in the Embassy until the journalists and defenders left the grounds. After reading the statement, the 12 people knocked on the door with the intention of making the delivery. Nobody opened. There was only interaction through the intercom of the door with a woman who identified herself as reception staff. The woman said there was no one from the Embassy, ??although a notice was posted on the door informing that the embassy would be closed from December 24, 2018 to January 6, 2019. The document was left under the door of the embassy. To end the action and as a response to the refusal to receive the statement, a symbolic closure of the Embassy was made with a tarp that had the hashtag #NoAlaCensuraEnNicaragua written on it. 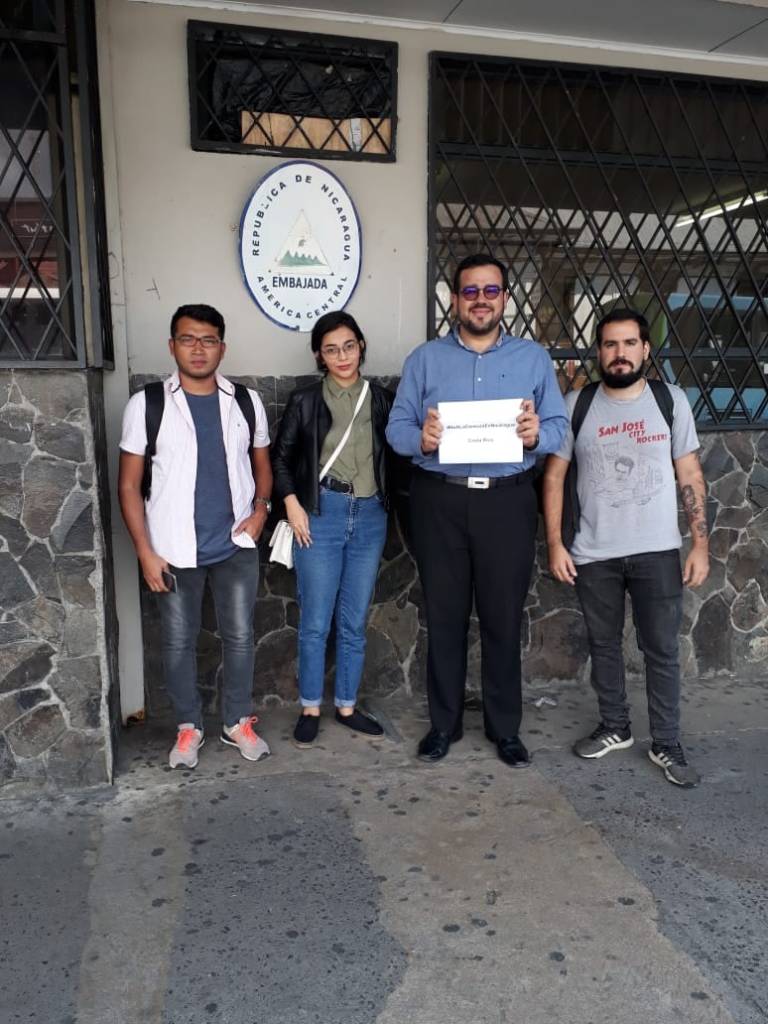 In San Jose, the group of journalists who went to the Nicaraguan Embassy reports: “At 1:10 p.m, four journalists – two Nicaraguans and two Costa Ricans – showed up at the main entrance of the Embassy. There, an unidentified official, came out and asked us what the reason for the visit was. We indicated that we wanted to deliver a statement signed by several journalists from the continent, that we would leave a copy of the document and another would be for acknowledgment of receipt. The official took both copies and after waiting several minutes at the door did not come out anymore, nor peeked again. Faced with this situation, we recorded our delivery and presence with photographs and then left the site. ”

In Bogotá, the situation was even more chaotic because there is no official address of the Nicaraguan Embassy in the country. A group of journalists initially visited Cra. 12 # 119-55, Bogotá, Colombia, where they were told that the Nicaraguan diplomatic representation was no longer there. In the end, they went to the Consulate of Nicaragua, where they refused to receive the document.

The journalists who signed the pronouncement will continue to demand the cessation of harassment against media, journalists and rights defenders in Nicaragua; protectors of the unrestricted application of freedom of the press, expression and thought.

Colleagues of Nicaragua: you are not alone. #NoAlaCensuraEnNicaragua