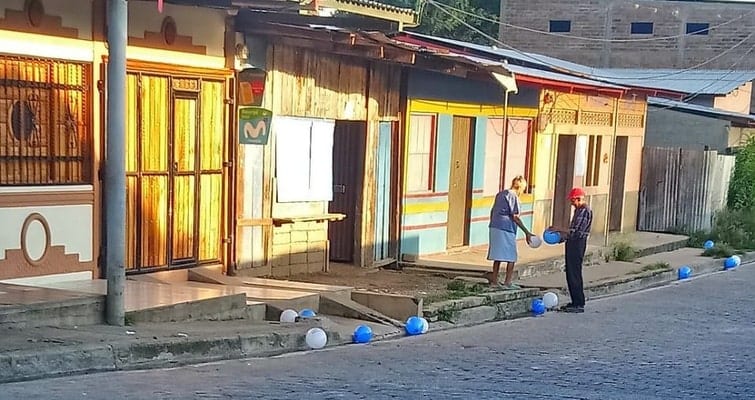 HAVANA TIMES – Thousands of blue and white balloons, colors of the national flag, appeared today in the streets of different cities and towns of the country as a new form of citizen resistance against the Government of Daniel Ortega, in coincidence with the patriotic independence celebrations, reported dpa news.

Filled with blue and white pieces of paper or with brief anti-government messages and slogans, the balloons became the target today of alleged government employees or supporters of President Ortega, who scissors in hand, took to the streets with the task of bursting the balloons.

“The one who crushes me is a toad”, read one of the messages in reference to the supporters of the ruler. “You invoke peace and from behind you kill”, indicated another.

“Masaya does not surrender”, “Democracy yes, dictatorship no” and “Freedom, freedom!”, were some of the messages written in small papers inserted in the balloons and that were discovered all over the country after alleged government employees made them explode, local media reported.

The opposition call, which circulated in social networks, comes nearly five months since the beginning of the worst political crisis in the country in recent decades and at a time when there are increasing illegal detentions of student leaders and protestors.

According to the news site “Article 66”, two young people were arrested today by the police in the city of San Marcos, Carazo province, for distributing balloons, [something that the authorities could classify as terrorism under the new catch-all law.]

The latest campaign of protest will culminate on Sunday with a new anti-government march called by various movements of relatives of arrested students and peasants, as well as doctors and teachers dismissed by the Government.

Under the slogan “Rescuing the Homeland,” the organizers asked participants to wear traditional costumes and flags of Nicaragua with black ribbons as a sign of mourning for the detainees, disappeared and deceased since April 18.

Although the government only recognizes 198 dead, national and international human rights organizations report that over 330 people have lost their lives since the start of protests in April, as a result of police and paramilitary assaults against opposition demonstrators.

Nicaragua celebrates its patriotic celebrations on September 14 and 15 in commemoration of a historic battle that took place in 1856 and the declaration of Central American independence in 1821. However, this year the traditional parades have been weakened by the crisis.