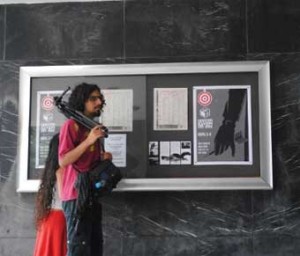 HAVANA TIMES, April 6 — In a sea of anxieties and questions, this week we saw the kick-off of the “XI Muestra de Jovenes Realizadores” (The XI Exhibition of Young Filmmakers). In the wake of the resignation of its director, filmmaker Fernando Perez, and demonstrations by some artists in solidarity with that decision, some people lost interest in the event.

Others of us wondered if it might have been good for everyone to boycott the festival to protest the censorship of Despertar, a documentary about the rapper Raudel of the Escuadron Patriota musical project.

In the end though, most people considered this to be an event that has been earned by and for youth, where every year diverse ideas converge about film and life in general. The general consensus was that for us to turn our backs on it would only gratify the censors who made the decision to remove “something uncomfortable.”

The ten previous editions of the exhibition have shown this event to be necessary not only for filmmakers (who promote their work here) but in opening new visual horizons to the spectators.

It gives a voice and a view of “alternatives,” no matter how insignificant they may seem in a world made and valued by the winners.

As such, on Tuesday (April 3) began the screening of the most recent films from Cuba. Since then, people have been watching documentaries, animations and fiction shorts that navigate between the kitsch and the banal, and through over-the-top passion and amorous gloom – but also to frankness.

La ciudad del Hip Hop, by Carlos Rafael Betancourt and Oscar Ernesto Ortega, goes on a nostalgic journey through the years of turmoil when that musical style was most popular among Cuban youth.

In an ingenious manner, they present the story of a student of a Cuban music (Tony Pinelli) seeks a meeting ground between hip hop, and the “controversy style” in campesino music and the protest songs that were at their height in the 1970s and ‘80s.

They visit the Alamar community, which for them is the “hip hop city,” and recall the concerts in the local amphitheater and in the “La Chusmita” section of that neighborhood. Though many women thrive in this genre, none are shown as leading figures, they only appear as background filler on a stage where the men do the improvisation.

Another film travels backs in time, on this occasion to 1994, as Ana A. Alpizar gives us Alumbrones (a break in the long blackouts), though this time the voyage is more one of fiction.

A girl, in one of the many blackouts of that period, spends her time playing with the shadows of candles, at least until her mother decides to buy a rechargeable lamp. Faced with this novelty, the girl has to rethink her game, which results in a happy ending – though somewhat predictable and sugarcoated.

There’s no shortage of movies exploring dark areas of the human personality (El rito del alacran, Hindmind) reflects on the sadness and misfortune of lovelessness and breakups, caused either by the inability to feel, isolation or external factors such as exile (Un adios es suficiente, Puntos de Vista).

One work that stands out is Pancho Pistola, which introduces us to a campesino who collects weapons in Cuba, despite this being against the law.

Brandishing his pistols and rifles, Pancho announces that if he has to use them, he will – “Whatever it takes to defend the revolution.” Interestingly, though the movie turns into an incitement to violence, however this one wasn’t censored.

There is a great deal that can be experienced through this festival, with its dissimilar topics, characters and stories. Each film that we see moves our thinking or our sensibilities at least a little.

The festival concludes on Sunday April 8.