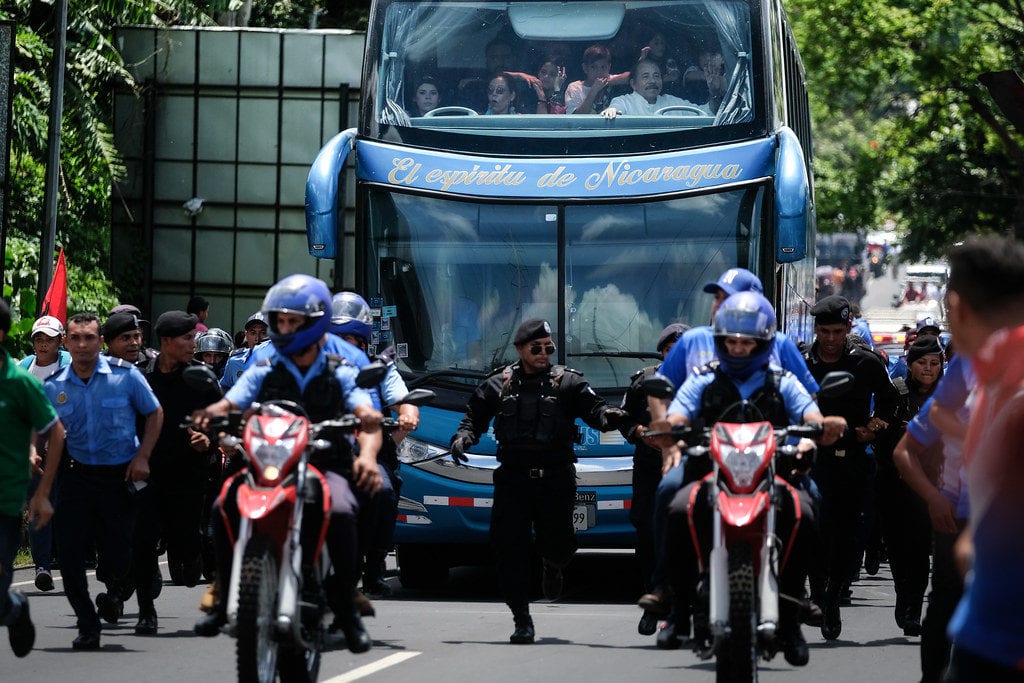 HAVANA TIMES – Daniel Ortega commemorated the 40th anniversary of The Repliegue (tactical retreat) to Masaya last week by riding on a Mercedes Benz bus from Managua to Masaya. His was the first in a sea of vehicles that made the journey, accompanied by hundreds of armed police.

However, he wasn’t able to actually complete the trip because this year, just as last year, he was not able to enter Monimbo, the Masaya neighborhood that for 38 years had been the destination of the commemoration.

Ortega started off the commemorative journey from La Plaza de las Victorias, in Managua, and ended up in a sports field outside of Masaya.  From early that morning the city of Masaya had been crawling with police.  But most of the city closed their doors to repudiate the violence with which the government repressed protests last year.   Some 325 people were killed, according to the Interamerican Committee for Human Rights of the OAS.

Monimbo, a long-standing rebellious indigenous community, is a symbol of anti-government protests.  On July 17, 2018, just last year, a protest was brutally repressed by paramilitaries and police in what they called Operation Cleanup.

Now, from the early hours the heavily patrolled streets were empty and there were padlocks on some people’s houses.

When we identified ourselves as journalists, an old man said to us, “We don’t want that murdering dictator to come here”.  And he snapped shut the padlock on his front door.

Monimbo Square, with its statues of those killed fighting the Somoza dictatorship, has been the site all these years for the gathering and the speeches at the end of the journey to commemorate the Repliegue.  This year it was occupied by police, and special forces, and this had been going on since early in the morning.

“What media are you from?”, a policeman asked the journalists who showed up at the Square.  We showed him our credentials, which he sent out through WhatsApp.  Our licence plates he read out loud into his cellphone. 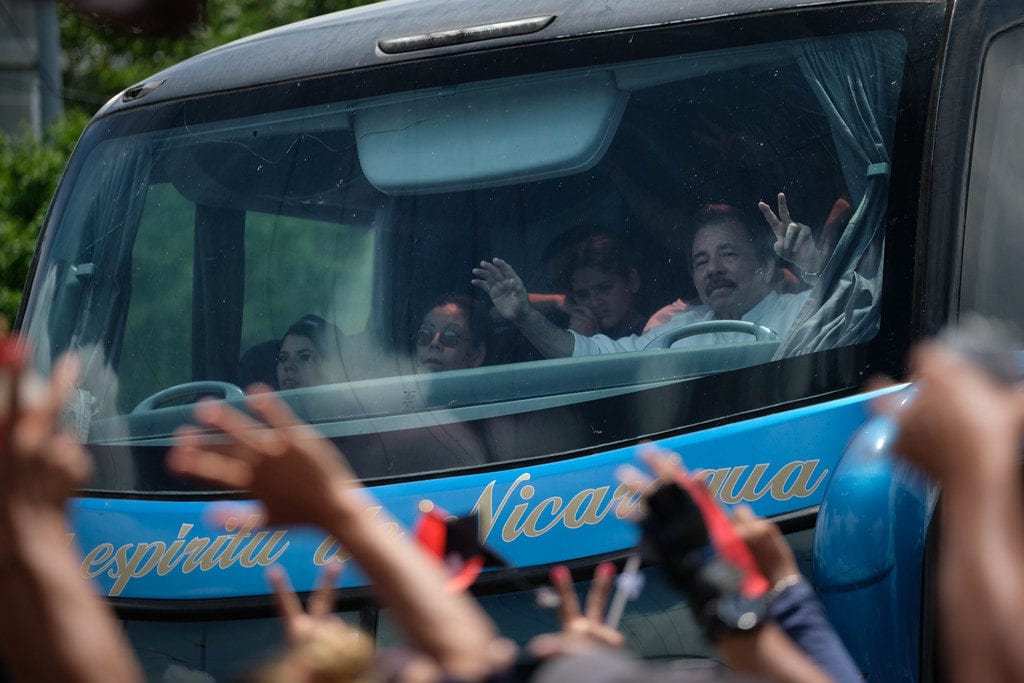 Ortega appeared later then the scheduled 10 o’clock beginning of the Repliegue.  He boarded a bus near the monument to boxer Alexis Argüello.  The procession was cheered on by State workers and FSLN sympathizers.

Behind his bus came hundreds of government vehicles, but it was Ortega’s bus that was accompanied by hundreds of Police, of the special troops variety  and armed to the teeth, It was their duty to look out for the safety of the strongman.

From the highway you could see on the upper floor of the bus Daniel Ortega and Rosario Murillo, his wife and also his vice president.  They raised their hands to greet the people. Sitting next to them was their daughter, Camila Ortega Murillo.

It was rather surprising when at some point along the route Aminta Graneras, ex police chief, placed herself beside the bus and started blowing kisses in the air to the presidential couple.  Photos of this scene circulated on social media.

None of the original leaders of the Repliegue of 40 years ago was on the bus with Ortega.  Carlos Nunez, a guerrillero who remained in Nicaragua during the uprising against Somoza was one of the main leaders of the Repliegue, but he has died.  Neither was Joaquín Cuadra, formerly head of the Army  there.  And William Ramírez is also dead.  These were the men who led thousands of people from the Eastern neighborhoods of Managua to the relative safety of Masaya 40 years ago, when Somoza ordered many Managua neighborhoods to be bombed.

In his short speech at the sports field, however, Ortega mentioned only the name of Raúl Venerio, an ex head of the air force, who died recently.  He was the person who had been in charge of ‘Historic figures of Sandinismo’.

Granera was head of the police for 12 years , but Francisco Díaz,  a member by marriage of Ortega’s family, took over from her four months after the massacre in Masaya.   The Interdisciplinary Group of Independent Experts recommends that Ortega, Díaz, and other high-ranking police including Granera be investigated.  The charge: crimes against humanity. 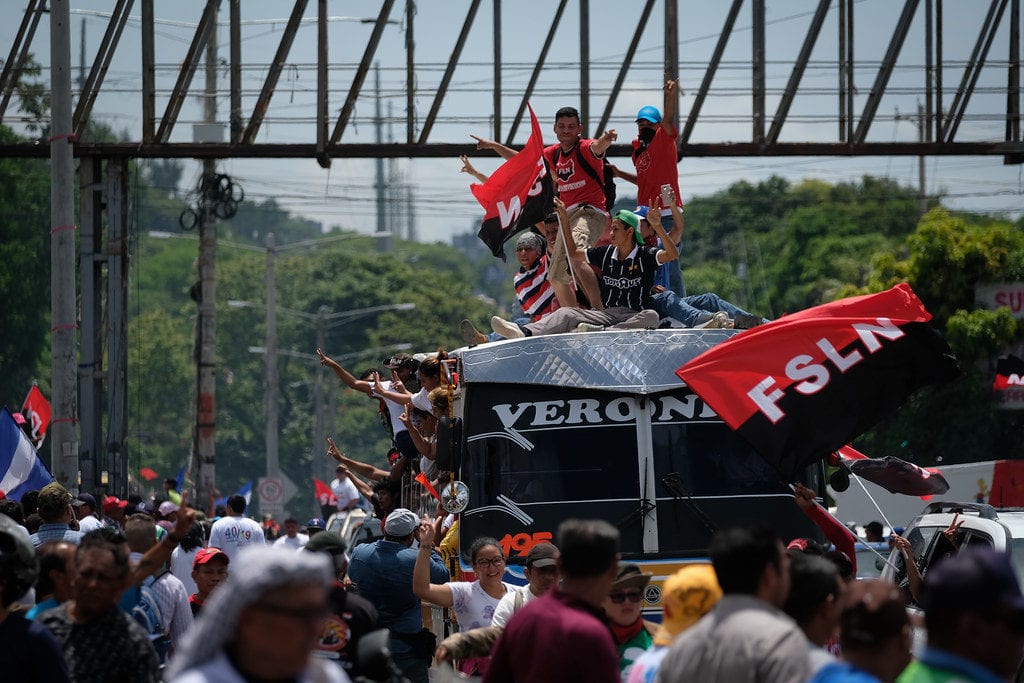 When Ortega’s bus got to Las Flores roundabout in Masaya, it turned south, without daring to enter the city.   Instead it ended up on a sports field, where a strictly FSLN rally took place.

The mayor of Masaya, Orlando Noguera, one of the newer generations of the FSLN, also gave a brief speech, interspersed with ‘They couldn’t, the can’t’ a party slogan referring to the civic rebellion which they said was an attempted coup.

The MC of the event proclaimed Ortega president of Nicaragua till 2050.  The speech Ortega gave was unusually brief.  He spoke for  13 minutes, never mentioning  the national crisis, nor the 104 remaining political prisoners, nor the OAS general assembly resolution that the Committee for Human Rights be allowed to return to the country, nor about ‘negotiations in good faith’ to reform the electoral system and call for early elections.

Instead, Ortega talked about the importance of peace, and how Nicaragua ‘is a warlike nation,

like Sandino himself, who would neither sell out nor give up.’  He went on in this vein while much of Masaya turned its back on him, keeping the doors of its houses shut, as a sign of resistance.