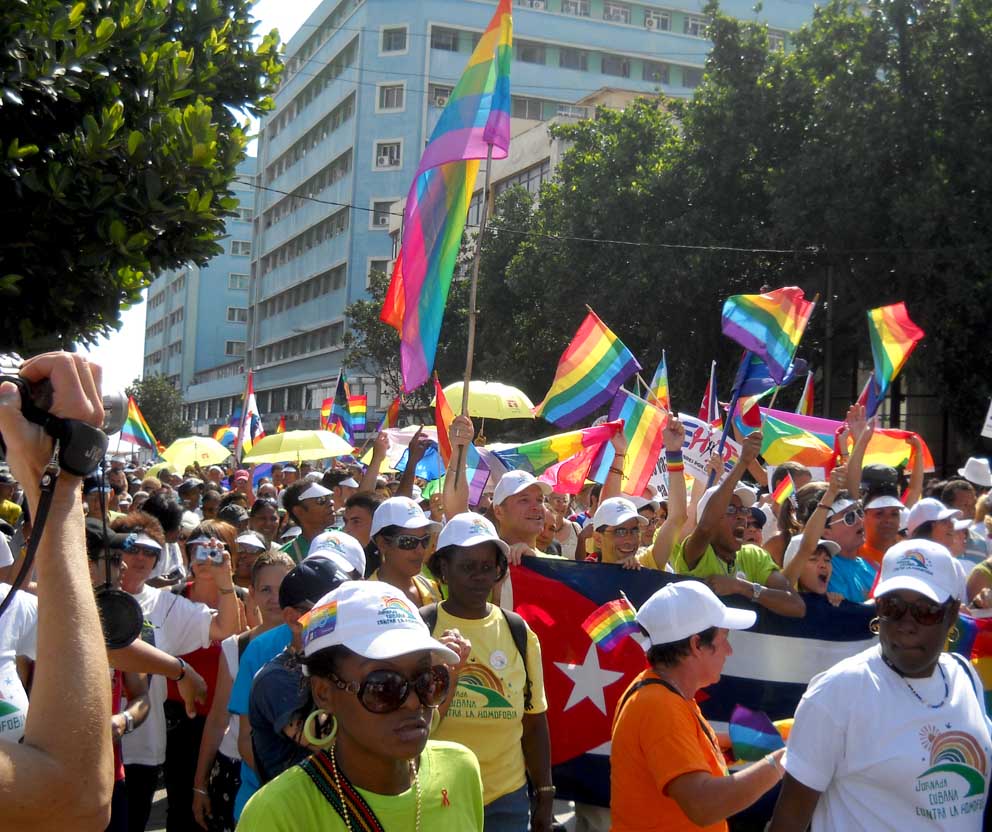 HAVANA TIMES, May 15 — Once again 23rd Street in Havana’s Vedado district was chaperoned by the police, while gays, lesbians and transsexuals paraded down that central boulevard. The short march began at the cascading Malecon fountain only a few blocks from Pabellon Cuba – the center of this year’s near-month-long “Campaign against Homophobia.” Colors, music and flags abounded.

The majority of the participants took advantage of the occasion to display who they are, without being repressed, though their presence stirred the curiosity of passing onlookers. The police, apparently playing a safeguarding role, must have been cursing the day when they had to assist the same people they abuse throughout the rest of the year.

These are the very ones who the police usually fine (and sometimes cart in to the station) for being at a gay meeting place on the Malecon, or who they harass at Mi Cayito (the beach that’s supposedly a zero intolerance zone). That’s why the uniformed officers didn’t hesitate in making fun (among themselves) of those who came to celebrate “their day.”

This is the day LGTBs are permitted to come out and show themselves off. Nonetheless, comments like “Look how that fag dressed in black moves… that’s to get you to do him,” could be heard among Havana’s finest as they broke out in laughter.

It’s been a few years now that the campaign against homophobia has been held in Cuba to eradicate that evil. Yet lesbians, gays, transsexuals and bisexuals continue being the objects of police repression, social humiliation, mockery and family rejection.

Repressed and spurned for such a long time, this is the one day when displaying themselves openly and congregating becomes a carnival. Some put on dazzling cabaret make-up at ten in the morning, others decked themselves out in wedding gowns and a few preferred to walk down the street kissing, unaware of the vortex that rallied them all together.

Spontaneous parades are not permitted in Cuba. All of them must be guided by the officialdom. The LGTB community, disallowed until a few years ago, has been winning official “recognition.” The place selected for the cultural gala this year was the important Karl Marx Theater, where outstanding events are held and major figures in the cultural world perform. 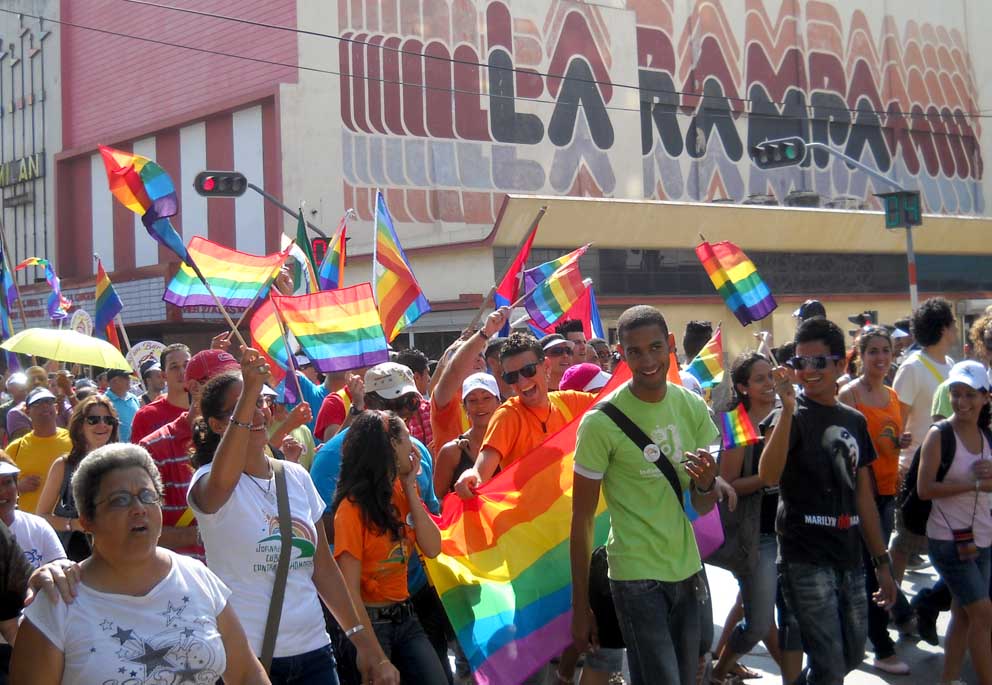 Sexual diversity is recognized and there exist lesbian and gay groups that meet and do everything possible so that their voices don’t go ignored. Even still, much is lacking before people and legal institutions begin to accept homosexuality without considering those having a different sexual orientation strange or weird. The road is long and we’ve barely begun the journey.

Additionally, what could mean progress in the struggle against homophobia could also degenerate into its opposite. A parade held once a year along barely four city blocks doesn’t help in gaining acceptance of homosexuals as human beings with the rights to walk down any street or to meet in any place at any time without being attacked (verbally or physically) or excluded by their fellow citizens, or — within a closer circle — by their very own families.

It doesn’t make sense that the gay community spends the whole year being invisible and that for one day the authorities draw open the curtain hiding them so the world can see that homosexuals in Cuba have rights. Homophobia is not eliminated like this; on the contrary, during that day many people go to see the “show” and to take photos, as if it were a carnival with freaks on display.

To make matters worse, this year they stole that show from the gay rights activists, though many of them didn’t even realize it. Groups of young people shouted rallying cries like: “It’s heard, it’s felt, the youth are present” – as if they were in a Young Communist League rally. Likewise, there were posters with slogans appropriate for other political events; one’s like “Cuba demands the liberation of the Cuban Five.”

The only demand on that one day should have been around the battle for the liberation of gays, lesbians and transsexuals, for their full freedom here in our Cuba. This struggle is too intense and urgent to relegate to take a back seat.

9 thoughts on “Cuba Parade Says No to Homophobia”