HAVANA TIMES — The Ciego de Avila Tigers finally left Havana’s Lions mourning on the field last month; the provincial team had won their first national title. It was a very well-deserved victory, but it inspired me to comment about the losers, beyond that now known outcome on the field.

One thing is certain: When Industriales are in the Cuban baseball playoffs, the stadiums are filled – even women at home give their husbands the license to turn the channel from their telenovelas to the sports channel.

The Industriales team is emblematic and at the same time problematic, as no one in the country can escape taking sides in relation to them. If we asked where many of those who are today celebrating the victory of Ciego were born, the surprise would be that very few of them are from Ciego de Avila, unless of course we traveled to that province.

To better explain the matter, let’s take a brief look at history, especially the part that many people don’t want to recall.

In the past, what’s most negative has been that on two occasions the authorities sanctioned, several of the “blue” players [Industrialists] for throwing games, in cahoots with gamblers who profit from the outcomes of sporting competitions.

Over time, something extraordinary accompanied the just act of fighting corruption. One of those sanctioned players, Rey Vicente Anglada, who was also a member of the national team, over time became the Industriales manager, eventually becoming the highest authority over the excessively pampered Cuban national team.

These are some of the controversies surrounding the Industriales. We should add that for the last past two decades up through today, no other athletic organization has contributed as many players to organized baseball in the United States – a total of more than 50.

As is known, their leaving the country is generally illegal, and subsequently those who pursue that route end up being considered “traitors.” Two players that were culled from the ranks and went on to achieve prominence in the US major leagues are Kendry Morales and Orlando “El Duque” Hernandez.

The team from the “capital of all Cubans” draws out the crowds, in addition to reaching millions of people over the TV and radio. They are applauded or booed, but never ignored. Havana has more than two million people, with a high percentage of them originally from other provinces.

Havana’s Latin American Stadium can hold over 50,000 spectators, but they will always be divided into factions that are “for” and “against” Industriales.

This involves a place that is humorously referred to as “the city of two million,” which jokesters explain as being made up of one million residents and one million police officers. 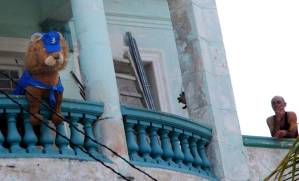 The funny thing is the popular perception that holds that the majority of law enforcement officers here are originally from outside of Havana, coming mainly from the eastern provinces.

I should add that there are legal limitations against people moving to Havana on their own free will.

From more recent history, we can’t forget that the last title won by the “blues” in the capital was in 2010. They started off poorly in the playoffs, where they were had barely arrived. What’s more, following one of those tumultuous brawls that unfortunately happen in baseball, they suffered a thorough trouncing at the Jose Antonio Huelga Stadium in Sancti Spiritus Province.

Typically, the national press turned a deaf ear on the event, but times change and today cellphones with cameras abound in the pockets of some Cubans. The news traveled around the world, even when outside of our country these incidents seem somewhat “normal” because they happen so often in many other sporting events.

As was aptly pointed out by journalist Nelson de la Rosa Rodriguez in the magazine Palabra Nueva (the publication of the Catholic Archdiocese of Havana), Industriales cranked up their self-esteem after the events on Sancti Spiritus turf to turn themselves into a totally different team. They successively annihilated the pre-competition favorite, Sancti Spiritus, and then the defending national champion, Havana Province.

You should have seen the faces and performances of the blue players! They played possessed, almost like in an agreement between themselves, with an obsession for victory, which they finally attained against Villa Clara, which on several occasions has been a candidate for the crown.

Now the guys from the capital are led by Lazaro Vargas, who was the paradigm of the players in Havana. The new coach looks like a man who is fully mature. Years ago, as an athlete, he was kicked off a team from the capital by controversial manager Servio Borges, who was for years our country’s highest authority in baseball.

The Industriales is like the capital they represent: a cosmopolitan city full of tourists and embassies, administering the country’s destiny and with the same problems that are felt nationally but that are magnified here by the large population.

I will never forget that in a documentary, which unfortunately isn’t shown much here in Cuba, filmmaker Ian Padron (now famous for his movie HavanaStation) asks a question to the famous “Duque” Hernandez concerning his identity. In response, the ballplayer lifts up his New York Yankees jersey to reveal another one underneath – one of Cuba’s Industriales.

“I’ve played with the two best teams in the world,” answered the renowned athlete. But he forgot to say, from what I understand, that he also played and won an Olympic medal with another great squad – one whose name appeared in four letters: CUBA.