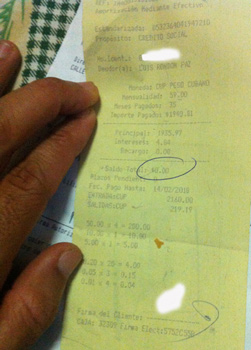 HAVANA TIMES — When I finally saw the proof of payment in my hands, I felt as though a burden had been lifted off me. It was something magical, indescribable. The first thing that crossed my mind was: “Now I can travel freely, I have no more debts with the State. How great!”

At that exact moment, however, my rational mind stepped in to remind that, in life, everything is relative. To travel freely abroad one needs a letter of invitation and the money needed to pay for the ticket and one’s stay in the destination country – not to mention the most important thing, the visa that grants you access to that foreign country. Not owing the Cuban State any money helps a bit, of course. That’s what I’ve heard, anyways.

It’s hard to believe it took me almost seven years to pay for that thing, I thought while looking at the yellow slip of paper. It was hard, but, thanks to my perseverance and some jobs on the side, I managed to put together the amount of money I needed to get rid of my debt.

That was another headache for me. I had to make payments of 59 Cuban pesos at the bank every month, until 2018. I was called by the bank and told I was behind on my payments on several occasions. I didn’t have the money, what was I expected to do? I had to spend the money I did manage to make on other important things, like buying food to put on the table every night. I also had other expenses I had to prioritize.

I owed more than five thousand pesos! You were virtually forced to trade in your refrigerator for a new one and, to add insult to injury, had to cough up a heap of money. Being in debt for 10 years, what a pickle! I don’t know what my mother and I were thinking when we agreed to trade in the refrigerator. Our old refrigerator was older than I was and was in perfect state, I thought at the time.

Sometime later, I moved away from home and had the freedom to say “I won’t pay another cent for that.” I had the advantage that the bank didn’t have my new address on file.

Many people had decided not to pay because, in a way, they felt cheated, but I couldn’t take such a radical stance – perhaps because I should have turned down the deal when they offered me the change in refrigerator. Later, it was too late, I was already inside the train and the only thing left for me to do was bite the bullet and pay the sum agreed.

In addition, I decided to make the payments because I am an honest person who doesn’t like owing anyone anything, much less the State, and because, if I ever I get the chance to travel, I don’t want them telling me at the embassy they can’t give me a visa, or someone at Customs saying they can’t let me out of the country, because I have a debt with a State institution.

I don’t like having debts, and I think most people are the same.

Luckily, the new appliance has been working well. Other families haven’t been as lucky and have had to pay a large sum of money to repair their new, Asian appliance.

Today, after five years of hauling this burden, I can finally breathe easier. I am free (of debt). I don’t owe the Cuban State anything. I keep reminding myself of this – it feels very, very good.

It may seem like a trifle, but I think that, for any average Cuba, settling a debt with three zeros in it is something marvelous.