Text and Photos by Michael Morgan*

HAVANA TIMES – Sometimes Havana feels like home. Others, home is all I can think about. On alternate days, the line of 50s-era cars churning down the roads, or the neighbors shouting conversations from streets to third-floor windows can make me nostalgic for a period of time I’ve ever only witnessed in films. These romantic anachronisms are what makes Cuba so charming. Sometimes, though, that same line of cars, each spewing its own thick cloud of black and noxious fumes, can choke me; that same neighborly conversation can feel intrusive in my tiny apartment.

To some extent, the Cuban experiment has worked. Medical services are free, education is free, housing is supplied by the state, crime is low and staple foods are doled out in quantities dependent on the size of families. None of these services allow the average Cuban to thrive, or even to approach the baseline of first-world expectation, but the basic necessities are more or less provided by the government. Anything extra (meat, for example) is meant to be purchased with the governmental salaries that most adults earn. The difference between the average monthly governmental salary of 25 dollars and the 40 dollars of more skilled workers like scientists and medical professionals is almost negligible. This is an egalitarian society in principle.

Most people here have-not. Castro’s country was designed this way. In a society of have-nots, the system of class is meant to revolve around something other than wealth, for example: education, patriotism or even athletics. But the economic aftermath of the collapse of the Soviet Union, Cuba’s largest trading partner and benefactor, can still be felt. Whereas before 1991, people were, by and large, satisfied in the achievements and ideals of the revolution; today, the specter of defeat can be seen in every government office, in the somber expressions of every government employee. The understanding that this island nation isn’t a quaint and nostalgic place to live, but a living anachronism, is part of the national psyche. 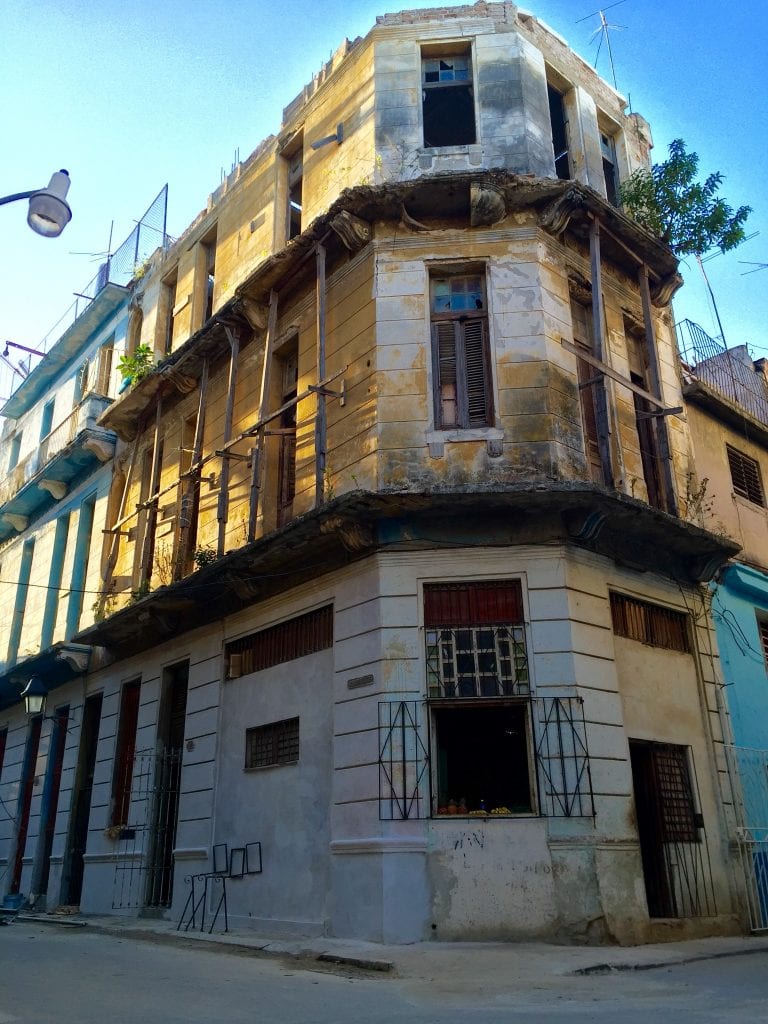 I enrolled in Spanish classes at the University of Havana as much to learn the language as to get an inside view of the workings of a large government institution. The university itself is one of the grandest educational campuses I’ve ever seen. Built on the tallest hill in Havana, a clutch of colossal neo-classical buildings hem in a shaded courtyard that might be the most peaceful place the city has to offer. From the top of the university steps, half of Havana unfolds before you and shards of Caribbean Sea, dark as sapphire, can be seen in between buildings. The air up there is always fresh. But the university is a Cuban microcosm: pretty on the outside. Students sit on broken chairs while teachers write on disintegrating chalkboards.

In a program geared toward non-native Spanish speakers (i.e. foreigners), my peers and I got the impression that the government was trying to put its best foot forward. The forty-year-old man leading the Q&A section of our orientation day was a model citizen: handsome, educated and outwardly passionate about his country’s past and, more importantly, its future. His zeal was fresh, as if he’d led a battalion of guerilla soldiers himself just weeks ago, as if he were still reveling in socialism’s triumph. He countered questions about Cuba’s restricted access to internet and balanced media outlets with defensive diatribes on the US embargo. Even though many of the arguments he made were plausible, the non-answers he supplied seemed not just rehearsed, but reflexive, automatic. In my experience, his level of indoctrination is not indicative of most Cubans. Likely, he was chosen for that post due to his bone-deep patriotism.

Another Cuban in my life is a sixty-year-old man named Guillermo whose job is indistinct. He wears a dingy beige uniform and baseball cap and sits next to the back entrance of an upscale restaurant all day and night. The door to my apartment is next to the mangled beach chair he calls his office. The first time he introduced himself, we had a brief, but pleasant conversation. Our second and subsequent twenty-five encounters would be a list of all the things he’d like to help me with: introducing me to a friend with a cheap taxi, another friend with a cheap apartment, asking me if I’d like to meet some of his “amigas” (i.e. prostitutes). Hardline communists do not engage in such backdoor capitalist enterprises. While I do appreciate his initiative, I’ve become an expert at dodging him.

Sometimes Guillermo’s eyes are more honed than my ability to sneak past him. Upon returning home one night, he’s there as usual, but he’s gotten into some rum with one of his co-workers. He claps his hand on my shoulder and bellows “Hasta victoria siempre!”, to which his friend replies “Viva la revolución!”, to which I respond, cheerily, “Deben de estar borrachos”. Translated: they recite popular pro-government slogans and I say they must be drunk. Other Cubans are within earshot of the conversation, and all smiles quickly fade and eyes drop to the ground. My keys are out of my pocket and in my doorlock almost instantaneously.

My off-color comment was more a result of an inability to speak Spanish well than a lack of tact. Language barrier or not, though, I can tell when someone is being sarcastic, and Guillermo was being exactly that. The thing is: reciting government slogans sarcastically can be explained away easily, while an openly critical conversation can be construed as derision. With a member of the Committee in Defense of the Revolution literally living on each block, you never know who’s listening, and while it’s less common to receive a visit from the Ministry of the Interior for such minor transgressions these days, it’s not unheard of.

Even if I could speak the language better though, Cubans can be difficult to know. It’s not that they are distant, reserved or rude, it’s just that we come from polar opposite systems or government and economics, which can make our basic patterns of thought as difficult to translate as our languages.

Cubans are bred with a brand of patriotism that would put US citizens to shame. All advertisements are managed by the state, and the vast majority reference the revolution, its heroes or objectives. Schools instruct children in political idealism. To avoid becoming indoctrinated at a very young age is all but impossible. Even if parents do harbor anti-government sentiments, sharing these feelings with young children is a liability. Those who have read George Orwell’s 1984 will remember the scene in which a political hardliner is taken away by government services because his daughter overhears him grumble the slightest bit of frustration.

Most Cubans eventually reach a point where they shake off the illusion of governmental success, and for good reason. Sought-after university and civil service positions are said to be given by preference to the children of the powerful. The racial and financial equality that was promised (and somewhat realized) early on in the revolution has backslid since the collapse of the USSR.

While the dreams of the older generation took flight in the wake of the revolution, they were quickly sent into perennial holding patterns and eventually crashed in the ocean. The wreckage of these failures can still be found in the faces and the manners of the elderly. Three generations of rations, shortages, and lines that move slower than tides have created a culture of disenchantment.

Today, when young Cubans try to reconcile the reality of their existence with the story of their history, the realization is often psychologically traumatizing. While the state universities pump out thousands of capable would-be professionals, opportunities remain slim. Many of the most highly trained (estimates are as high as 40,000 per year) slip away from the island under perilous circumstances to stake their claims abroad. Many more leave their diplomas to collect dust and instead seek work in the local tourism sector, where they can easily earn several times the standard government salary. 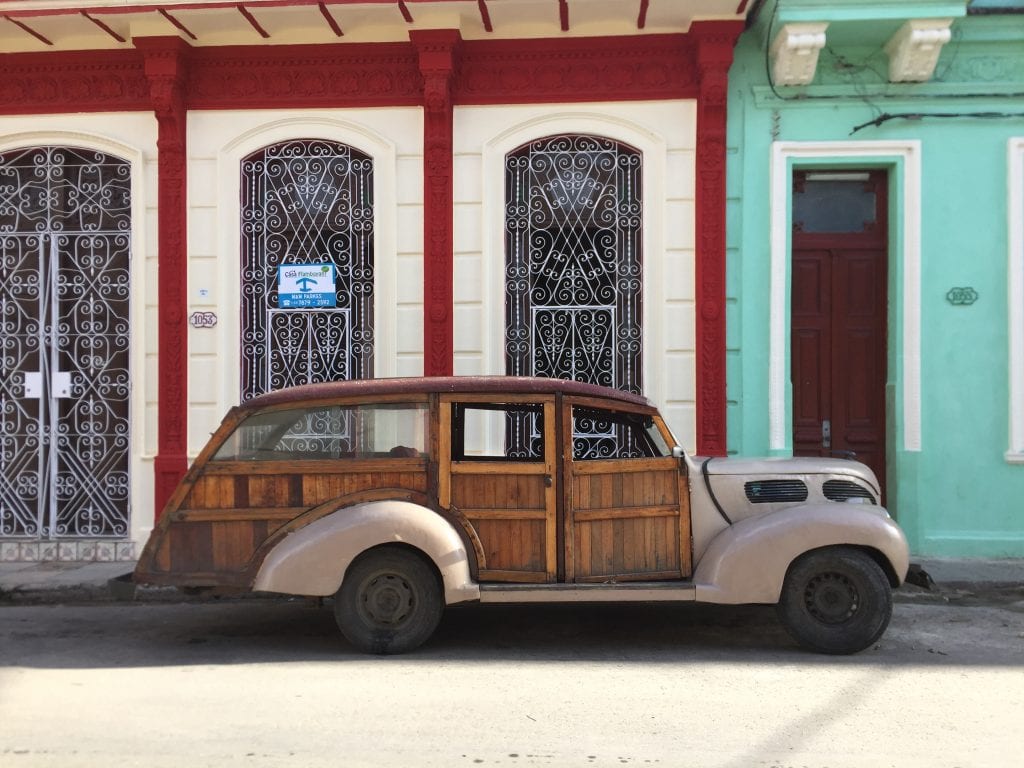 On the days when Havana feels like home, I am walking the streets with blinders on, choosing what to see. I ignore the broken infrastructure and misappropriation of human resources and focus instead on the herds of well-dressed young people. I remember that five years ago, the average Cuban citizen wasn’t allowed to own a car, wasn’t allowed to enter the residence of a foreigner. On optimistic days, I see the dawn of opportunity.

Havana, as the economic and cultural heart of Cuba, exists somewhere between the stasis of previous decades and the flux it desires. It is vibrating with expectation. Few of the original revolutionary regime are still alive, fewer are in power. One Castro is dead, another elderly. A changing of the guard is imminent.

U.S.-Cuba Relations are still tenuous, especially since a recent mysterious sonic attack on the U.S. Embassy led to the removal of staff from both nations’ embassies. Nevertheless, a steadily increasing number of tourists has pumped more hard currency into the country, and you get the feeling that young people’s hopes are beginning to turn away from exodus and back toward home-grown success. Dreams and expectations are once again taking flight. Can Cuba endure another holding pattern?
—–

4 thoughts on “Holding Patterns: Cuba and the Excruciating Pace of Change”