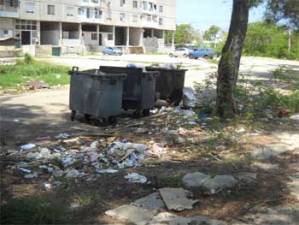 HAVANA TIMES — I remember that when I was a little girl, I liked to walk around outside our apartment building and search through the grass for treasures that chance would place in my path: a piece of gold-foil paper, a button in a peculiar shape, a piece of a toy…

Between the stems and pebbles, I was fascinated by the possibility of finding something different, something created by people, something that had belonged to someone and that sheltered the mystery of a story.

I also thought about how we would go to the beach, where with my inability in the water I would prefer to scour through the sand to discover — along with the seashells and wonders washed in by the waves — a buckle or a cheap piece of clothing.

What a mixture of astonishment and delight it was in finding something, taking it home and rediscovering it years later in a drawer! It was a pact with chance, an alliance stitched together from the origin of these details. It was truly magical.

Today I can say exactly when that magic was lost, at least for me. This (too) was in the late 90’s. It was when I took my son (who was little back then) to Bacuranao, the first of the string of beaches located to the east of Havana.

I hadn’t been there for years, so it was almost a physical shock to see the invasion of empty paper peanut cones, the wrappers for greasy slices of pizza or fried chicken, the cigarette butts, plastic cups and even the remains of animals slaughtered in acts of hope (or fear).

Human traces covered yards and yards of sand with no mystery whatsoever.

There, on that same beach where I had also discovered that other enigma that draws us into heaven and depths, the love of youth, a brutal overturning of history was submerging every trace of beauty and innocence.

There, on that same stretch of sand where I had read “The Lake,” a story by Ray Bradbury, with which I conspired against my eternal anguish regarding the sea, death and life, a human tide was ebbing and flowing to leave more and more garbage in its wake.

I even I saw pieces of Styrofoam floating around in the water, together with paper and a bloody sanitary pad that brushed up against me. No wonder the generation of my son, now a teenager, sarcastically refers to Bacuranao as “Basuranao” (a variation of the word “trash” in Spanish).

I haven’t been able to completely rid myself of the nausea I felt that day (I have to put it that way).

When I walk through the Alamar neighborhood, almost daily, it’s often along streets without sidewalks. There I find the grass that borders the asphalt filled with plastic bags, worn-out shoes, wood and all kinds of debris whose origins I’d rather not know. I’d prefer not to even look at any of it, but the relentless sun leaves no alternative but to direct one’s gaze downwards. 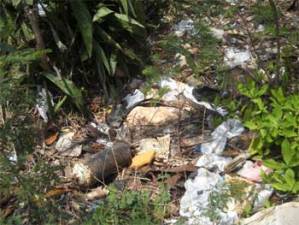 Should we accept this?

I’m not trying to ridicule the heritage handed down to us, the inhabitants of this neighborhood designed for the “new man,” because I’ve seen other Havana neighborhoods that are stigmatized by the same neglect.

But I would like to highlight that in this urban project characterized by such horrendous architecture, the only contrast left was nature.

It’s that sense of insignificance that Kafka protested so much about, where human existence is only a detail, though not because it’s overshadowed by technological progress, but by our own trash and waste.

Walking across enormous areas without shade towards a bus stop where you’ll wait anxiously for a bus to eventually take you out of here (to rescue you), driving you to the other side of the tunnel, you can come to feel yourself a part of that eschatological landscape – condemned to oblivion, statism or the slow movement of its decomposition as the only dialectic of hope.

However much the general perception of beauty has changed since the times of the ancient Greeks, what is innate in people is the need to find something that visually soothes, ennobles and redeems them.

This is known by artists, psychologists and even those companies that pay tremendous sums to choose the best advertising agents.

Those who designed the area of the city named Miramar, for example, knew this, just as much as those who are fortunate enough to live there.

It’s no wonder that the “buzos” (literally “divers,” people make a living off what they find in the trash) know that the dumpsters in Miramar are the most fruitful. The vast menu exhibited in the Alamar neighborhood, with its “dense areas of pasture,” as a poet once said, doesn’t even offer these trash collectors good alternatives.

But because of all my sensibilities to rebel against this barbaric affront to hygiene, civility, aesthetics, I feel that something must be done.

A friend, a colleague who works with Havana Times, had the idea of ??holding a mass trash collection, legitimizing the true (and forgotten) sense of volunteer labor.

The first difficulty she encountered was the impossibility of obtaining the right gloves for this project (it’s an undeniable fact that not all waste should come into direct contact with one’s skin).

When the shattered foundations of Cuban civility are rebuilt, I’m sure the physical cleansing of our cities will take place – and with this our own self-esteem.

This is what not only cripples the wills of individuals, preventing them from expressing themselves or condemning them to salaries that, as someone wisely said, “neither let you die nor let you live.”

I think that what’s most urgent now is to react with our instincts, the same ones that cause us to be moved by a setting sun or the flight of a bird. Aspiring to this minimum right, where we will find an environment where we ourselves do not feel like garbage: ignored, forgotten, abandoned.

3 thoughts on “Living in a Dump”