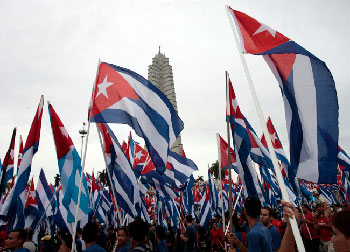 HAVANA TIMES — I can’t remember the number of times I’ve participated in the parades Cuba organizes to celebrate International Workers’ Day. As a kid, I would take part in these gigantic rallies alongside my parents and uncles, and even though they’re a bit tiresome, to me they were like a huge party.

During my high school years, May Day parades were still cause for emotion. They were occasions in which students from different classrooms got together to sing, dance and yell at the top of their lungs.

There wasn’t a student at my school who’d skip out, and it wasn’t because we actually cared about the date or what it meant. For us, it was just a carnival that would end with romantic encounters, escapades, the drinking of a little wine or liquor, a round of songs by Silvio Rodriguez or Pablo Milanes, and, sometimes, even an excursion down to the river.

By the time I got to university, the parade had lost much of its appeal. First of all, because we had to try, through all means possible, to get two people from our class to see us in order to prove we had actually gone. Second, because I no longer liked the huge crowds of people. Only the prospect of seeing an old friend I hadn’t seen for a long time would motivate me and make me participate in the parades every year.

May Day parades ought to have special meaning for me, a worker. I assure you it did, at one point, but not so much anymore. I don’t believe that parading all the way down to Revolution Square, carrying banners with phrases that evoke the occasion, or portraits of revolutionary heroes or leaders, means anything for the world’s proletariat, much less that we support socialism or not.

There are many different ways to show our support for the achievements of the revolution, without having to hold a parade or a public speech. It is by defending our rights as workers, by struggling against corruption and illegal practices, that we can best support the cause of the world’s downtrodden.

This lack of interest in May Day parades isn’t limited to two or three people. Many workers feel profound indifference towards these rallies, which our country organizes since the triumph of the revolution.

Many people prefer to stay home to have a day of rest next to their families. Others think it a waste of time to parade beneath the hot sun while workers continue to have thousands of unaddressed problems.

Then there are those who do take part in the parade, but only out of a sense of commitment or to avoid being reprimanded in their workplaces.

The honest truth is that we are seeing less and less of the enthusiasm that once characterized these celebrations.

2 thoughts on “May Day: Joy and Disenchantment”