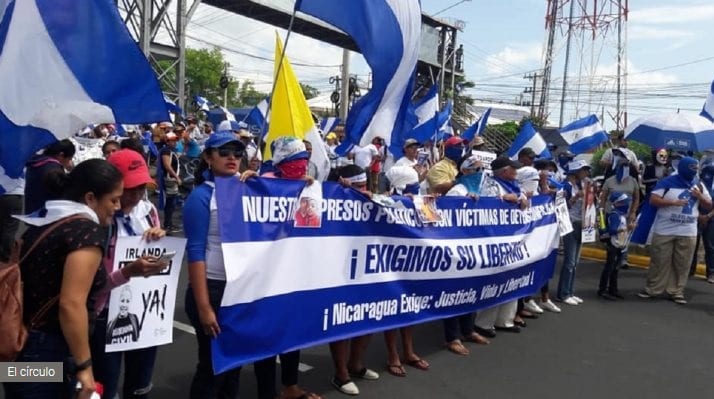 There is nothing to discuss or negotiate

HAVANA TIMES – From a very young age, I understood the meaning of struggling for what I want to achieve. In the kindest of ways, from my mother, and later, by the historical references from a valued teacher, I learned the importance of making constant efforts and working hard to attain a certain goal. The most demanding one was taught to me by Sandinismo in 1976, when the Somoza dictatorship had to be confronted with violent methods, which meant sacrifices and deaths.

Fighting against a dictatorship requires not only clarity of political proposals, but also awareness of the danger and a ferrous will to change. As Somoza with his National Guard and EEBI death squads, the Ortega Murillo dictatorship with its police, paramilitary and the complicity of the Army, will act as such, without regard to human rights, conventions or democratic principles, with a destroyed Constitution and government institutions.

It seems absurd to me that, at this stage of the struggle, there are some positions far removed from what we are really facing. What do they expect from tyrants? Dialogue and negotiation for the good of the country? Recognition to the bishops and their true opponents? A dictatorship will never open or soften itself, even less when the megalomania of the tyrants confronts the Nicaraguan people and the world.

Some have not understood that Ortega and Murillo are in fact fighting a war against the civic resistance of the people, against their organizations and networks; everything that moves, protests or thinks is the enemy and will be beaten, locked up and eliminated. You think this is an exaggeration?

They have lost the National and international public opinion and they no longer seem to care. The dictatorial logic is to defend power at whatever the cost, to hold on to it through firepower and death.

To that end they have been organizing their “Units of Defense of the Revolution and of National Sovereignty”, which will be projected as “an organized and mobilized effort in the face of imperialist interference and their national allies”, when in fact they are a paramilitary that will act together with the army, if they manage to appease the reticence of certain high-ranking officers.

That is why they acted against the nine non-governmental organizations and against the media directed by Carlos Fernando Chamorro; that is why they expelled the Special Follow-up Mechanism for Nicaragua (Meseni) and the Interdisciplinary Group of Independent Experts (GIEI), associated with the Inter-American Commission on Human Rights (CIDH).

This, added to the crimes and vexations that the tyrants have been committing since April 18, only indicates that they are following through the steps of their strategy, among which are: to silence the media and capture leading journalists, while they complete and refine their supposed national defense plans.

They are waging their war. This seems exaggerated or absurd, when there is no armed force that opposes the dictatorship. Thus, they acted against the students, the urban and rural population; they shot to kill, and they will continue doing so towards any demonstration that resurfaces. They have organized a paramilitary force with high firepower and they are calling for the Ortega party’s militancy to join the defense units. The approval of the Nica-Act by the United States government will trigger actions that create the war environment they need, to impose a state of siege and suspend liberties and guarantees.

When certain politicians talk about dialogue and say things like “we have to look for new interlocutors of the opposition”, they try to displace the social force that started and has sustained the struggle to this day, with its successes and failures. And they go further: “Not everything can be achieved, we have to negotiate, because otherwise we will continue to kill each other in Nicaragua.”

The question is: What’s to talk? Negotiate what? The Blue and White Nicaraguan Unity coalition must be clear and categorical in their position. Deaths and justice are not negotiated. Here there was no war; there was confrontation, massacre, disappearances, murders, imprisonment and rape. The conditions of the departure of Ortega and Murillo must be well defined, as well as the processes of disarming the hordes of the regime and a restoration of democratic institutions.

The struggle is for comprehensive change and its authentic protagonists are those of the civic and peaceful rebellion.

12 thoughts on “Nicaragua on the Tip of Crisis and Danger”