HAVANA TIMES — On March 13, 1968, Fidel Castro, in one of his inexhaustible speeches, announced to the Cuban people what he called the “Revolutionary Offensive.”

In reality though, there was nothing revolutionary about it; on the contrary, it was an essentially counterrevolutionary measure intended to eliminate the urban petty bourgeoisie.

This would mean the elimination of one of the few areas of social autonomy that remained in the country after the brutal nationalization of everything that moved.

After that step, all that remained outside of the state sector was a limited sector of small farmers formed into different types of cooperatives. In this condition, they owned 30 percent the land but produced something like 70 percent of the food for the Cuban population.

The revolutionary offensive was another step forward in achieving socio-political control over the population and in the construction of a totalitarian regime with Thermidorian aspirations, which finally consolidated on the basis of Soviet subsidies.

It was also another step to repress everything that seemed strange to a new morality, though this appeared more like the plebian asceticism of a medieval peasant movement than a Marxist program.

With it they took with them everything that was different from the way the new leaders perceived dignity: homosexuals, critics, irreverent artists, longhairs, religious believers – and of course small business owners.

This was also an outburst that was particularly damaging in the sense of being anti-urban. This was in the same sense that cities were considered spawning grounds for amoral manifestations while the rural world was the ideal place to cultivate new revolutionary virtues.

If there is any doubt of this, one need only read this short paragraph from a homophobic and anti-urban speech that Fidel Castro delivered in March 1963:

“Many of these bums … have taken their licentiousness to the extreme of wanting to go public settings to hold their effeminate shows… Socialist society cannot allow that kind of degeneration. There are a number of theories, though I’m not a scientist, I’m not a technician in this area, but I have always noticed one thing: the countryside does not produce that sub-product. I’ve always seen this, and I always keep this in mind.”

From this, obviously, came practices such as the agricultural mobilizations that we were forced to participate in for decades, schools in the countryside (which terrorized families up until very recently); and the fateful “Military Units to Aid Production” (UMAPs), which were labor camps that destroyed the lives and dreams of thousands of Cubans.

All of this was an attempt to submit a Caribbean population to a stoic and monastic status that, naturally, the new political class escaped, since they reserved intimate leisure areas for themselves within and outside the country. 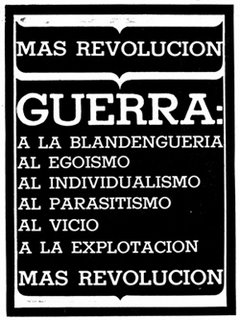 I recently took another look at the speech that announced that revolutionary offensive. I hadn’t returned to it since the day I heard it, when I was a teenager, amid a crowd that packed San Lazaro Street.

Reading it has helped me to reaffirm my belief in the value of democracy, public debate and an independent media.

The report presented by Fidel Castro against small urban businesses — in the middle of a several-hour tirade that included observations about the drought, the struggle against imperialism and the victory of the 10 million ton sugar harvest — was a gross manipulation of public opinion that could have only been carried off from a position of unchallenged power.

Fidel Castro’s report was based on a study made of 6,452 private businesses — friteros (churro stands) included — as well as 955 bars.

This was done by Communist Party members from each municipality with the support of the government surveillance operations of the Committees for the Defense of the Revolution (CDRs), which obviously ensured that the findings were constructed according to the conclusions that were to be attained in order to legitimize the operation – particularly those conclusions that best nourished the political passions of the moment.

It was such that the study provided data that was frankly infantile, such as specifying that 66 percent of customers of bars and 72 percent of the owners were “antisocial and amoral” detractors from the revolution’s aims.

Though these claims were difficult to verify, they were sufficient to identify which happy boozers were the wavering enemies of the revolution.

In addition, Fidel Castro grotesquely distorted statistics in his speech.

He said, for example, when the truth was that only 28 percent of businesses had no legal records, he presented this as “almost a third.”

Similarly, when he had to explain that 51 percent businesses maintained proper sanitary conditions, 40 percent ad regular conditions and only 9 percent were poor; he presented data showing that the hygiene of almost half of these facilities was “not good.”

This he did successively, which would have made the report an invitation to laughter had it not been for the fact that behind him was an expropriation wave directed against workers, against the “people” that Fidel himself defined in his 1953 legal plea, and against the few remaining spaces of social autonomy.

I say expressly “workers,” because there’s something that neither the eagerness of the researchers nor the manipulation of the speaker could hide: Of the 6,542 small businesses analyzed in Havana, 72 percent were registered and paid their taxes on time, 88 percent of the owners worked in their own business and relied on labor family, while only 31 percent of them had other employees.

Seventy-three percent of the families that owned businesses had no other income, and the overwhelming majority had daily gross revenues of less than one hundred pesos.

Interestingly, only 6 percent of business owners had requested to leave the country – this, in a country where, even then, the only way to express discontent was with one’s feet.
—–

8 thoughts on “Recalling the Revolutionary Offensive of 1968”