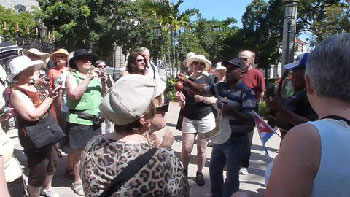 HAVANA TIMES — I am writing from the point of view of a Canadian tourist.  Someone else will have to tell you how this is experienced by Cubans.

Keep in mind also that I am a senior from a temperate climate and May is already a hot month in Cuba.  So I went out in the morning sometimes after very little sleep and so somewhat irritable.

Our choir chose the Hotel Ingleterra.  This was a great location, right in the heart of Havana.  It also meant that an excellent Cuban band played just below our window until 2:00 in the morning.

The expression “street hassle” is taken from Lonely Planet.  According to Lonely Planet “…Havana is a relatively safe city – particularly when compared to other Latin American capitals.”  One of our choir members confirmed this, based on his travels to Mexico.

Even so, parts of Havana reminded me of some city blocks in Vancouver where you can’t stand still for 30 seconds without being approached by somebody who wants money.

So what was the hassle?  First, an awful lot of people wanted to sell us stuff.  I’d bet that I’m not the only Canadian who likes to shop in silence and anonymity, avoiding contact with sales people until it is absolutely necessary.  This may be a cultural difference.

I remember one Cuban woman who seemed quite frustrated that her approach to me simply caused me to move on.  It’s hard to shop anonymously when you are invited to step into a small private home.

In some places you would be approached by a bicycle taxi.  Four seconds after you had politely said no, another driver, who had witnessed the first exchange, would then offer a taxi.  Our politeness began to wear thin.

Next were the “jinoteros.”  Jinotero is derived from the Cuban word for jockey.  The jinoteros “jockey” or manipulate tourists.  Three of our choir members were out looking for a restaurant one evening and fell into the hands of some jinoteros.

They were ripped off for $100.00.  Not a crushing loss, but a pretty good take for the jinoteros. 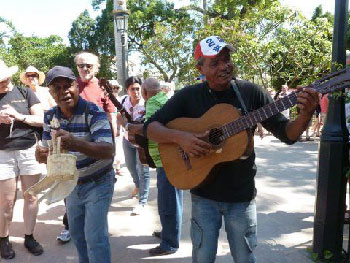 The “milk for my baby” approach is very common.  I was told that in fact milk is heavily subsidized for children until they turn 8 years old.

“I’m a security guard” is another common approach.  Presumably you pay this person to stick with you and protect you from street hassle.

We also ran into beggars.  Not everywhere, but where there were concentrations of tourists.  Two incidents stay in my mind.  Once, as we boarded our bus, there was a woman with a boy.  She was thin and haggard and seemed agitated to be standing near to so many people with money, but at the same time afraid to make a direct approach.

Another morning, as we approached our bus, I saw an older woman not looking entirely well and moving slowly toward the bus.  After we were on the bus, she was still on the sidewalk, now crying.  One of our choir members made the effort to get off the bus, approach this woman, and give her some money.  This was a very human response and may have been the right thing to do.

If it was, then shame on me for passively watching this whole scene.  Was this woman acting?   I don’t think so.  If she was, she deserves an Oscar.

Even in downtown Havana you can avoid street hassle if you go out early in the morning.  One woman in our choir would go out running before breakfast, without any difficulty. And our trip to Ciudad Libertad was free of hassle.  All we met were friendly people who did their best to help us in spite of the language barrier between us.

18 thoughts on “Street Hassle in Cuba”