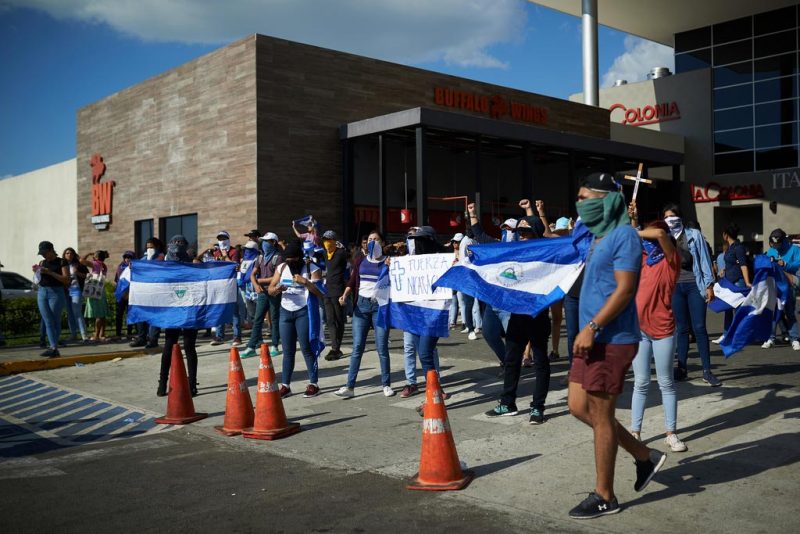 HAVANA TIMES – Everyday Nicaraguans witness with surprise, fright, indignation, we don’t even know how to call it, that anguish that we are living. It is enough to go outside to experience the vision of pick-up trucks full of riot-police and police, willing to arrest us if we dare to pull out a flag or shout Long live Free Nicaragua!

But those same policemen can see that one or more criminals are harassing, mistreating or beating a woman or their current victim and do nothing. Of course, neither do they follow-up on complaints for robbery or any other crime.

In the countryside the situation is worse, it is enough to mention the more than 100 peasants whose deaths have not been investigated. The most recent horror, the four “Mayangnas” (indigenous people) killed by armed settlers in the Bosawas Reserve, whose death were initially denied by the police, which later was forced to rectify before the evidence and overwhelming information.

That same police that today chases, harasses, imprisons, beats and makes (or allows others to make) life impossible for the released political prisoners, that daily imprisons a good number of people, who looks with delight the marks their paramilitaries put on houses that they determine to be marked. The police forgot that their mission is to protect the people and not the dictators. That is the security that in any modern state citizens place on the hands of law enforcement in exchange for paying our taxes.

If we are lucky to be employed today, we are vulnerable to have a dismissal letter waiting for us, because the company is on the verge of bankruptcy. And if we are business people, small, medium or large, the tax burden, today the highest in Central America, has become unsustainable. The Mayor’s Office threatens to send us to jail if we do not pay an arbitrarily determined IBI (real estate tax), not in accordance with an approval of the municipal tax plans, but at the discretion of the mayor on duty.

In some cases, especially in the municipality of Managua, the valuation rose so much that the payment of the property tax increased by 300 percent. All this without prior warning and violating all laws, as was explained with enough details by the tax law expert, doctor Julio Francisco Baez in his recent appearance in the program “Esta Noche” of Confidencial TV.

The tax reform of last year left many companies out of competition, the increase in the Social Security tax rate led to an increase in informal employment. Everything indicates that what is sought is to destroy any vestige of institutionality in the country, or rather that the regime is willing to continue testing to see how long we endure.

Going through customs at Nicaraguan borders is a real torture for those who travel by land, two and a half hours of paperwork and formalities, versus 25 minutes at the Costa Rican customs. The row of trailers extends for several kilometers and the wait to enter the country is one week, while it takes three hours at any of the borders of neighboring countries. It should not be a surprise then that El Salvador and Costa Rica are organizing a ferry to avoid passing through our country.

A tight synthesis of the evils that afflict us indicates that we are living in a prison as Father Luis Ugualde, former dean of the Andres Bello Catholic University of Venezuela, said when referring to his country. Or rather, we continue being held hostages by a regime that squeezes and squeezes to see how much our endurance capacity is. It seems that we are in a bid to measure our endurance capacity. Venezuela has lost two thirds of its GDP in recent years, Nicaragua about 10 percent in the two years of crisis.

That is why the question is valid: What will be the straw that breaks the camel’s back? It is known that the economy has never been a concern for Daniel Ortega, so that whatever his advisors decide and how this will affect citizens is something for which he could care less. But we citizens should be concerned and it should also worry the owners of capital, who are letting the country collapse because of the madness of the dictators to remain in power.

It is worth reminding the regime of the words of Fernando Henrique Cardoso, former president of Brazil and before that, renowned social scientist: “in today’s world it is no longer possible to impose without negotiating, deciding without listening or governing without explaining or convincing.” Or is it that for the Ortega and Murillo the world of today does not exist and they believe that we continue to live in the paradise that the Vice President imagines? In my opinion no, something changed and although they have not noticed, the rest of us are clear that that pink paradise does not exist.

That is why I believe that now is when we need to continue reclaiming our rights, that, just as independent journalists organize to claim theirs, lawyers should also do so, educators, economists, small businesspeople, indigenous people, environmentalists and consumers. In short, let the dictators know that they have not won the battle, because they have not won any.

Even their followers know that there is no future, as we have seen and heard in recently leaked videos. They know perfectly well that that idealized past, in which they used to fill plazas, will no longer return.

But those of us who do believe in a better future for our country, that it should have strong institutions in which there is no dictatorship, where we will not live in a prison, where our rights will be respected and where the law will cover us all, we have the obligation to register our protest before the daily abuses and in the spaces we can.

Those of us who want to feel citizens and not hostages have the obligation to demonstrate and work for the unity of all sectors. Only united and clear of our goals will we achieve the end of the dictatorship and the establishment of a transitional Government that allows us to build a Nicaragua with rights for all.