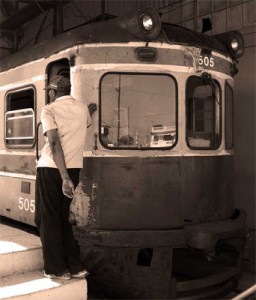 HAVANA TIMES — When I read the post by my fellow-writer Erasmo Calzadilla, I broke out laughing. It wasn’t that I was happy about what he went through taking a trip by train here in Cuba; rather, it was because something similar happened to me in the mid-nineties. So now, like Erasmo, I want to share my own story with the friends of Havana Times.

Unlike Erasmo, I wasn’t trying to go on a pleasure trip or anything. I was forced to travel in that fashion due to health problems of one of my aunts. She had suffered a heart attack and was reported in serious condition at the provincial hospital in central Ciego de Avila.

The transportation crisis back then was worse than it is now. Inter-provincial buses were scarce and I believe that the only flight from my city of Guantanamo to Havana was canceled at the time. Therefore I had no choice but to take the giant iron train to get to Ciego de Avila.

My aunt was in such poor condition that she could have died at any moment. So though I felt overcome with sadness, fearing the worse, as always I was optimistic about her recovery. Therefore I decided to use the trip to not only help with her care but also to see that city, which I had only known through what I had read and seen on TV.

As for my stay in Ciego, I don’t have any complaints. I had no problems with either the treatment given to my aunt at the provincial hospital or the people who — though different from easterners — didn’t cease to be hospitable and attentive.

The ride on the train, however, was something utterly different. It started out with a three-hour delay and our arrival was an additional ten hours late. During the afternoon everything went fine, or at least as normal, because nothing goes fine in a Cuban train. So things were “normal” until we all began to smell a stench that only a bathroom on a train and at a train station can produce.

But then the stink of the bathroom was intensified by another one that was even more disgusting, though I couldn’t tell where this new one was coming from, I could only brace myself in case I passed out at any moment. 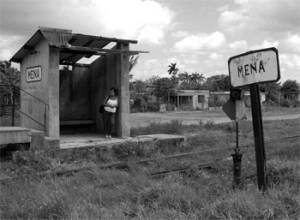 Fortunately, the attendant was well aware of the problem. She went over to where the smell was issuing — a tall young guy — and said: “Listen, put your shoes back on your feet, which you shouldn’t have taken off in the first place. Otherwise we’re going to throw them and you out the window – and believe me, I’m not playing.” The guy smiled and gave us some relief by putting his shoes back on.

Night came between eating, conversations, complaints, laughs and cries. I imagine that almost all of the travelers were able to get some sleep, everybody except the ones in my wagon. We were accompanied by this Mexican drunk (which is to say a drunk who spent the whole night singing mariachis) and a 7-month-old baby girl that wouldn’t stop crying.

The strangest part is that if the little girl and the drunk had tried, they wouldn’t have been able to do it so perfectly. When the child cried, the drunk was silent; and as soon as the singer started to sing, the little girl would automatically shut up.

I prayed that the two would pool their musical repertoires and in this way perhaps they would shut up at the same time – but no way! No God heard my prayers, so we spent the entire night listening to that unappreciated concert.

When the sunshine returned the next day, there was a great calm. I couldn’t believe it: I had fallen asleep, as had the little girl and the mariachi singer. That’s how it was for about an hour and a half, and we were only about an hour or so from arriving – but then the rain that had been threatening us all along the way began to fall.

“The rain will cool the air but leave strange smells after,” I thought. I began enjoying the scent of damp earth that I like so much, but then drops started falling on me and on the person sitting in front of me.

I sat up quickly. “I’ll have to make the rest of the trip on foot, damn it. Just what I need,” I said out loud.

But the people next to me came up with a solution; they found a piece of cardboard that would serve as an umbrella in that Swiss-cheese piece of a train.

We were sitting there for about 10 minutes when an unexpected motion by the person next to me moved the cardboard, channeling all of the accumulated water onto my head.

So, that was how my journey went: 10 hours later than what it should have been, filled with odors (the least unpleasant of which was the smell of the rails), and left drenched to cap it all off.

3 thoughts on “This Cuban’s Train Stories”