HAVANA TIMES — It was painful to see how they tore down what was once the Pedro Borras Astorga Pediatric Hospital, better known as the “children’s hospital” among residents of Havana, located on G and 27 Streets, an area where there are several other hospitals.

Passersby and cars stop at the site. People shoot videos and take pictures of the damage that more than 20 years of no maintenance and repair work – since before the Special Period – have caused.

The hospital grounds border one of the busiest avenues in the city, and the many people who walk down the thoroughfare stop to contemplate the destructive spectacle (a process that has apparently been divided into several stages). The building is being torn down by a heavy-duty machine with a boom and sledge hammer. It was a well-built facility, of the kind that are no longer constructed in the country, part of the Art Deco architecture that blossomed in the city at the beginning of the 20th century. Composed of large metal beams and brick walls, it was once one of Havana’s major pediatric care centers, drawing patients from many localities. 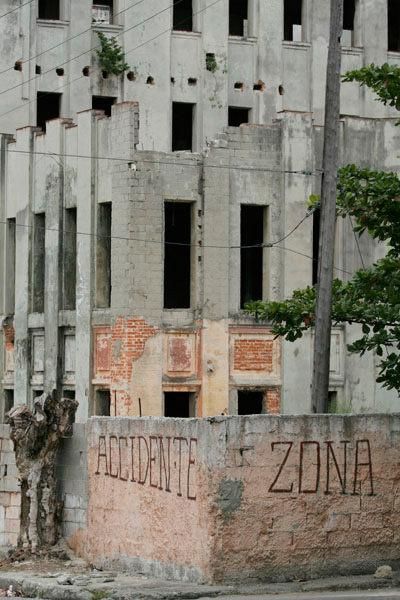 People’s remarks tend to vary. Some suggest surprise before something unexpected, others the lost hope that it would be restored. Some express conformity, and yet others are in favor of its demolition, saying it was “time to put it to rest.”

Personally, I thought that, through different studies and the search for an engineering solution, they would ultimately restore this important pediatric care facility. The low ambition behind its demolition, however, is evident: from what the demolition team says, they plan on building a parking lot there – a flat lot covering a city block, to replace the 3 stories of building demolished. This, they tell us, will be very useful for the staff and patients of the four neighboring hospitals.

It is true the city has offered children medical attention without the help of the Pedro Borras hospital, but we could well ask ourselves whether it wouldn’t have been better to restore it instead of turning it into a heap of rubble, at a place where some people squatted, others procured building materials and others did god knows what for years.