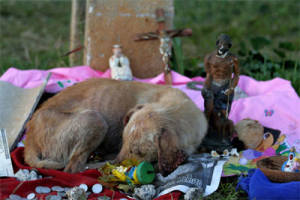 HAVANA TIMES — One of the largest celebrations of religious faith on our island is the pilgrimage to the shrine of San Lazaro. Every December 17, the site — located just outside of Havana in the town of Rincon — becomes the home to thousands of people who come to make good on some promise they’ve made and to worship San Lazaro.

Thanks to religious syncretism that characterizes religious practices in Cuba, Babalu Aye is represented by San Lazaro on crutches and accompanied by two faithful dogs.

The Religion of Ocha attributes countless miracles to Babalu Aye. For believers of the Regla de Ocha, he is one and the same as San Lazaro on crutches; he is the deity for those who pray for the healing of skin diseases and infectious diseases, including epidemics.

3 thoughts on “Cuba: The Day Dedicated to San Lazaro”