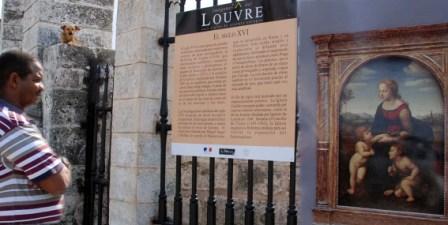 HAVANA TIMES, March 22   –Mona Lisa looks out upon the port of Havana, her smile captivating all those strolling near the Royal Force Castle, in the historical center of the city.

Bathsheba -in the half-light that gave Rembrandt her- bathes without the least reservation before the passing traffic, while a gypsy arouses emotion with her daring neckline.

Murillo’s El joven mendigo (the young beggar) looks at the passersby, as if she wanted to explain something to us. Maria Margarita, by Velazquez, finds herself astonished by the fresh air, just as three muses play with antique cars parked a little further away.

People stop to look at this particular gallery. Adults and children of both sexes admire the reproductions from the Louvre Museum that will be visiting us up until May 18.

“It’s a real opportunity,” said one gentleman, “since we cannot go there; still, it’s good that they’re bringing the works to us, even though they’re not the originals.” 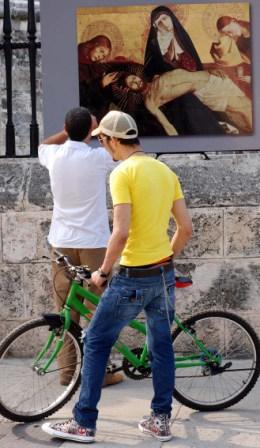 Meanwhile, Magdalena de la lamparilla lights a candle to meditate in front of the statue of Christ overlooking Havana. Diana, the goddess of the moon and the hunt, poses in depictions by several European schools. In a German painting, the fingers of Dafne are transformed into glossy laurel leaves.

A girl believes she sees the La Gioconda (or Mona Lisa) in Ana’s face, in another painting by Da Vinci: The Virgin and the Child with St. Anne, the last masterpiece by the artist. She’s right – the smile is the same.

A boy wanted to have his picture taken next to the paintings, and even a dog guards the paintings from high up on a wall.

People interact with the works, they exchange opinions, debate, take pictures. They come alone, with their families or with friends. The center of attention is the exhibition “Images of the Louvre: Six Centuries of European Painting.” Without a doubt, it’s a great occasion to take a walk near the sea and admire great art.

One thought on “Louvre Paintings along Havana Bay”