HAVANA TIMES – Brazil is a luminous poem. At the beginning of the year, I published a photo feature that revealed its alarming social contradictions. Now, before the summer is over, I want to share with you some of the country’s incredible beauty.

By a strange twist of fate I am unaware of, my first trip abroad took me to the place I had wished to visit the most. This trip served to confirm something I already suspected: what I like most about Brazil is its sensual language and its boundless music. Unfortunately, this post does not manage to convey that delicious experience.

I visited the states of Sao Paulo and Rio de Janeiro, which are very different places. 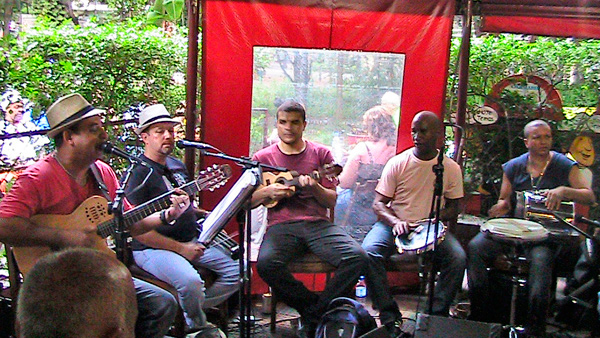 Sao Paulo is an eminently modern city (it is no accident it should be considered the second most important metropolis in South America). It is noisy, overpopulated (more than eleven million people live in the city), gigantic in more than one sense and boasting breathtakingly beautiful architecture.

The city appears to be experiencing unstoppable growth, incorporating the latest technological breakthroughs, such that one can connect to the Internet free of charge through a Wi-Fi network at practically any café. As most of you know, that is something akin to paradise for any Cuban who lives on the island…

The crowded markets also proved delightful for me. The mind-boggling variety of fruits, vegetables, grains and root crops were a sight that overwhelmed my senses, as were the new smells, exotic names, exciting tastes, provocative textures and novel color combinations.

Tasting the pre-Colombian azai, the spicy feijoada, a refreshing maracuya, a good caipirinha or cacahza drink, made my palate re-evaluate all of its preconceptions. These experiences were enhanced by the Latin sense of familiarity, that care-free attitude that makes one feel at home. The differences between foreigners and nationals would dissolve and true kindness (not that feigned affability one comes across in the food industry or that self-interested servility they would have us call hospitality here) was the one, common factor everywhere.

The Corcovado Christ, standing 700 meters above sea level, could be seen from any street corner, during the day and at night. During my stay in the city, it lost one of its fingers due to a lightning strike (something which received much media attention).

Parks with green areas are simply delicious in both cities, and citizens both use and respect these public places. In one of them (the Tuperi park in Tatuape), to my huge delight, I saw black swans swimming placidly across a peaceful pond.

Flowers, including a broad variety of orchids, were everywhere (it was the height of summer in January). One saw them, not only at florists’, but in house gardens and growing in the trees of parterres, whose trunks and branches were often covered with a peculiar kind of fern.

It was gratifying to come across a well-defined culture and identity, expressed and defended by the locals with pride and a true sense of belonging. Rarely did I hear any music that wasn’t Brazilian. Brazilians love samba, which, rather than a simple type of music, is a complex and rich genre, complete with sub-genres.

Pagode, bossa nova, percussion, batucada, cancion – all stem from samba. “Let’s go samba” was something I heard on more than one occasion. This form of diversion was popular among most of the people I came into contact with. Among these, it wasn’t strange to come across someone able to play the pandero, bombo and other percussion instruments.

Brazil and its people are a gift to the world. If I ever return, I must get to know its wildlife and visit the Amazon region, a natural treasure I wasn’t able to see during my trip. I have yet another post about Brazil in the works (I am aware I will not be able to cover every aspect of my experience in the giant, South American nation), a brief report of what I learned about the passionate anti-capitalist struggle there.

One thought on “My Experiences in Beautiful Brazil”