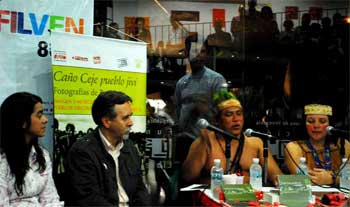 HAVANA TIMES, March 23 — It was one of the best book fairs I’d ever attended. The Teresa Carreño Theater and other nearby facilities served as sites for the eighth Venezuelan Book Fair. For almost two weeks, I was going there from morning to night.

At the stall sponsored by Librerias del Sur publishers, I could find the most outrageously inexpensive books. They had, for example Indigenous Medicines (for 2 bolivars, or about 45 cents USD), a book that had been published many years ago and that many people had been looking forward to finding again.

I had fun reading one of the books most sought-after by Venezuelan readers: ¡Qué pena con ese señor! (What a Shame for that Man), written by Carola Chavez.

I was introduced to the literature and discussions with the writer to whom this year’s fair was dedicated, Luis Brito Garcia. Likewise, I was able to speak with many Venezuelans who love Cuban music and literature. Plus I ran into a Cuban contingent that had come to present their editions, and I even helped them to sell their books.

I enjoyed the tranquility of some of the conference rooms where presentations were made by writers from Venezuela, Spain and Uruguay (the country to which this year’s fair was dedicated). I was entranced by the music of the ethnic Jivis and the presence of a shaman who performed a brief dance.

I marveled at a rare edition of En Busca del Tiempo perdido (In Search of Lost Time).

The best thing was to breathe the smell of books, listen to poetry and meet people who love reading.